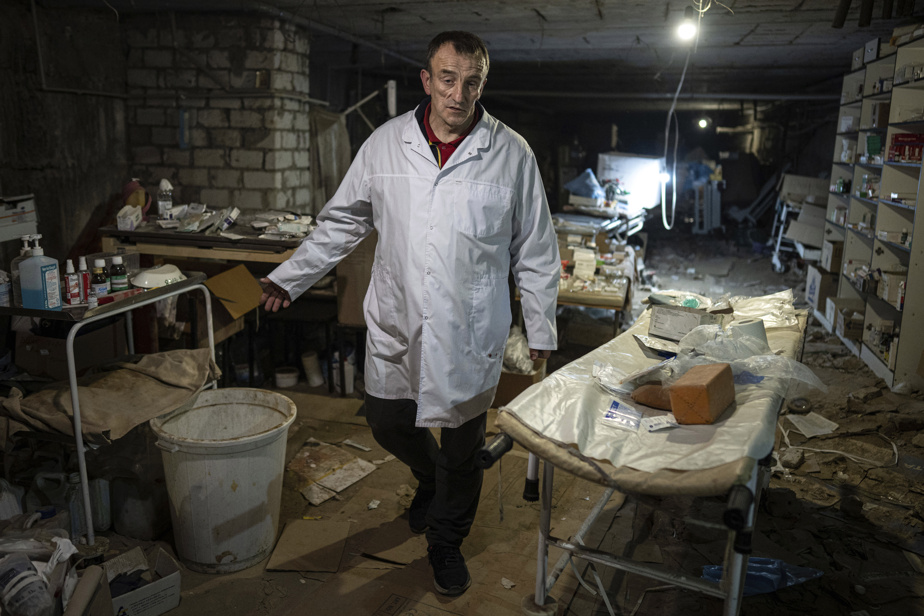 (Izium) During six months of Russian occupation and eight months of daily fighting, the hospital in Izium, eastern Ukraine, never stopped working for civilians, operating on the wounded at the sub- soil in the greatest precariousness, and storing the dead pending release.

Among the first towns taken by Moscow last March, the town of Izium – 46,000 inhabitants before the war – was liberated on September 11 by Ukrainian forces.

Since then, the hospital has been able to regain some semblance of normal operation, after being connected to a generator and the gradual installation of new windows.

In the corridor on the ground floor, heated and smelling of bleach, a patient walks around in pajamas. A cleaner is mopping the floor, and a secretary is poring over her admissions files.

“We have around 200 patients today, compared to 50 in June”, rejoices its manager, Dr.r Yuryi Kuznetsov, a 52-year-old surgeon.

“There we had our operating and resuscitation rooms”, shows the doctor, his gaze lost in a gaping hole left since March on this floor by the explosion of a missile.

The man, whose fatigue can be read on his face, blames his exhaustion on his night shift. Not on the six months he spent day and night keeping an operating theater in a rammed earth and concrete entresol, continuing to operate, under the nose and beard of the Russian soldiers, installed right next door.

“The most difficult were the first days (of the occupation), with a lot of uncertainty about what they were going to do with us,” recalls the surgeon.

“After some difficulties at the start”, on which he does not want to expand, the Russians decided to let the doctor treat the Ukrainian patients who still came to them, helped by a handful of nurses who also stayed.

The Russian soldiers had set up their own field hospital in a nearby building.

“They were there, in fact 20 m from my office”, explains Yourïi Kouznetsov. He was in daily contact with them and assures that he was not asked to operate on the Russian wounded.

After the reconquest of the city, on a mass burial site in a nearby forest, the Ukrainian authorities found 447 corpses at the end of September, including 30 showing “signs of torture”.

In these eight months of war, the hospital lost two members of its staff: one of the medical examiners was shot dead, and a doctor died buried under the rubble of his house.

During the incessant fighting and bombardments that ravaged the city, the emergency medicine activity was installed in the basement of the establishment, where stained stretchers served as operating tables, in the middle of cardboard boxes and dirt.

“We lost patients, for lack of equipment and medicines, but thanks to God, we were able to limit the deaths”, explains the doctor.

The few operations carried out in this basement saved lives, such as that of a patient operated on for a gunshot wound to the abdomen.

“A few weeks ago my office door opened and a man came in saying, ‘Doctor, you remember me. I am alive”, he recalls, referring to this patient.

“We all had at least one moment when we thought about evacuating. We have all had freakouts and depressive episodes, ”confesses the Dr Kuznetsov.

“But it is for these moments and in solidarity with my colleagues that I stayed”, adds the doctor, in a hurry to finally be able to take his first rest.