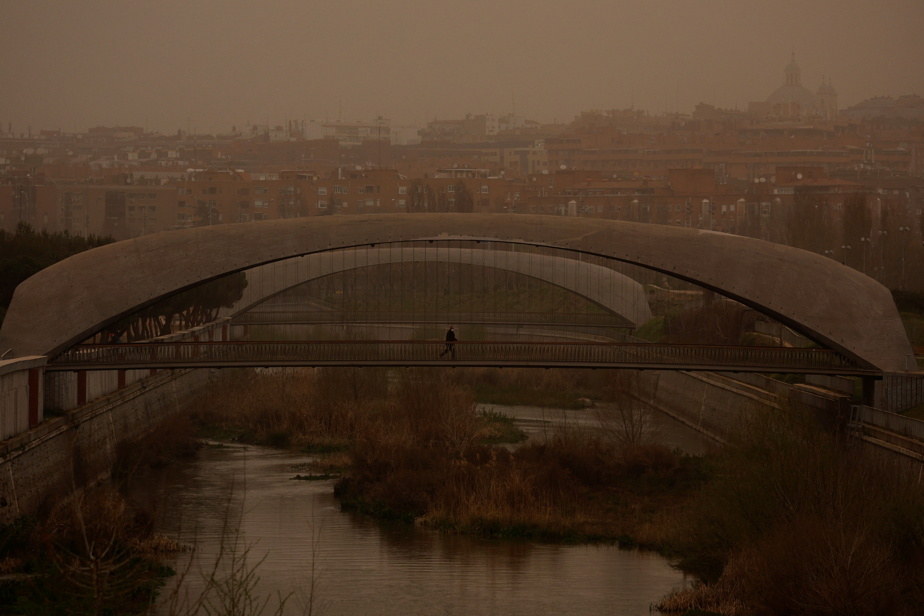 (Madrid) Orange cars, dusty metro corridors, a clogged and yellowish horizon: a thin layer of sand from the Sahara fell overnight from Monday to Tuesday on Madrid and a good part of Spain, before to go back to France.

Crossing the Pyrenees, the dust mainly passed on Tuesday over western France, where the phenomenon was particularly visible, for example in Bordeaux or La Rochelle according to Météo France, before heading north.

It should persist, although fading, until Thursday, said the French meteorological services. A phenomenon not exceptional, but “more striking by its geographical extent and its duration of a few days”.

In Spain, there were many of them on Tuesday morning rinsing the roof of their car, their terrace or the plants on their balcony with a jet of water in the heart of the Spanish capital where this fine ocher powder was deposited.

In the metro and the car parks, the floors were dusty and the windows of the highest floors of the buildings were dotted with brownish spots.

This meteorological phenomenon, strong hot winds loaded with sand dust from the Sahara desert, is called in Spain the “calima”. It is quite common, especially in the Canary archipelago, located in northwest Africa.

The “calima” this time affected Spain from the southeast to the northwest, from the region of Murcia to Cantabria, giving rise to unusual cleaning scenes and profoundly degrading the quality of the air, according to the authorities.

Storms in the Sahara desert create gusts of wind on the surface of the ground, which raise particles of sand and dust, explained the Spanish National Meteorological Agency (Aemet) in a video posted on Twitter.

The smallest particles remain in the air thanks to a temperature difference between the hot air in height and the ground which cools, while the heaviest fall, detailed the Aemet.

The wind then carried these particles towards the Iberian Peninsula, concluded the agency, which does not exclude “rains of mud” in Spain.

The air quality was poor Tuesday morning in the affected areas: stations located in Madrid or in the cities of Segovia or Avila (center) measured an “extremely unfavorable” air quality.

In France, the phenomenon should last until Thursday, because the sand “is blocked by an anticyclone on Greece”, explained to journalists Marine Jeoffrion, of Météo France. It affects “a good part of the country”, even if “the south is less impacted”.