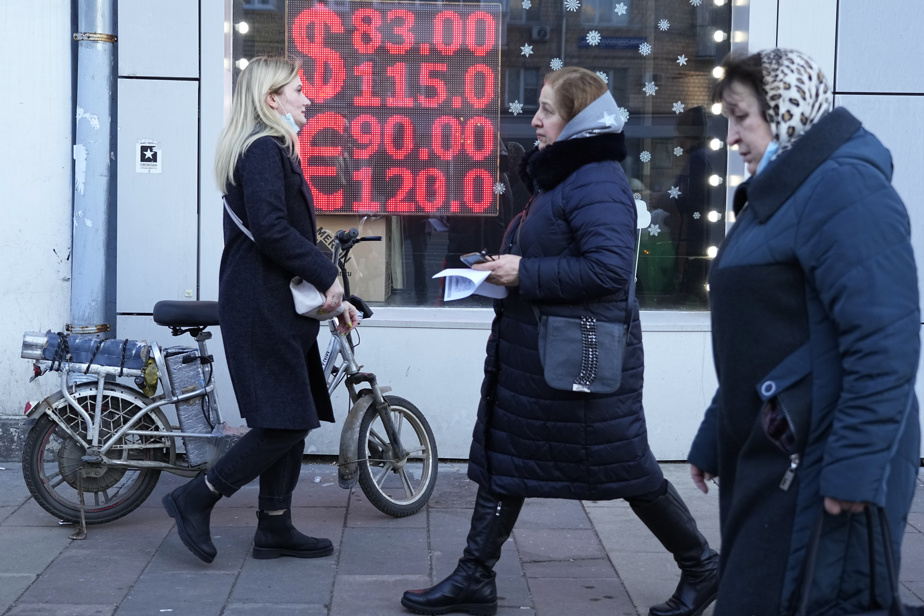 (Moscow) Russia on Monday accused the West of wanting to provoke an artificial default through its sanctions freezing Moscow’s assets abroad, reviving memories of the humiliating default in 1998.

“Statements that Russia cannot fulfill its obligations regarding its public debt do not correspond to reality”, insisted the Ministry of Finance, before adding that “the freezing of the foreign currency accounts of the Bank of Russia and the government can be seen as the desire of foreign countries to cause an artificial default”.

For Russia, it is about its honor and not only about its future access to financial markets.

For two decades and especially since the 2014 crisis, Moscow has indeed tried to build up an irreproachable financial health, with a very low debt ratio and reserves of more than 600 billion dollars built up thanks to the oil rent. .

But today, in retaliation for the Russian military intervention in Ukraine, the part of the reserves held abroad, around 300 billion dollars, has become the Achilles’ heel of the Russian economic fortress: they are frozen in the framework of Western sanctions, challenging Russia to honor several debt payment deadlines in foreign currencies during March-April.

If the eurobonds issued since 2018 can be redeemed in rubles, this is not the case for the first maturity which arrives on Wednesday, with a reimbursement of 117 million dollars.

“It’s a unique situation in which the party imposing the sanctions will decide on a default of Russia in 2022,” Elina Ribakova, deputy chief economist of the International Institute of Finance (IIF), said on Monday.

She notes that “unless the U.S. Treasury allows some of Russia’s $300 billion in frozen assets to be released to pay for less than $20 billion in foreign holdings of Russian Eurobonds, we are likely to see failure “.

But a certain vagueness remains around the first deadline of March 16, the situation being unprecedented. JPMorgan analysts believe that these payments should be possible.

Western sanctions have crippled part of the Russian banking and financial system and caused a collapse of the rouble. A payment default automatically cuts off a state of financial markets and jeopardizes its return for years.

After the fall of the USSR, Russia alone inherited the 70 billion dollars in debt of the vanished empire. A weight which it took more than a quarter of a century to get rid of.

The painful and chaotic 1990s culminated with a humiliating default on its domestic debt in 1998, when the Russian economy was weakened, among other things, by a financial crisis in Asia and by the colossal cost of the first war in Chechnya.

It took twelve years for Russia to return to borrowing on international markets, with a new bond issue in 2011.

In the early 2000s, the country benefited from an influx of petrodollars thanks to the surge in oil and gas prices which will allow it to build up reserves and definitively turn the page on the Soviet debt with the last repayments in 2017 .

Russia had made it a point of honor to rebuild a reputation as an irreproachable borrower, efforts that risk being undermined.

“Russia has the money to pay off its debt, but does not have access to it. What worries me the most is that there will be consequences that go beyond Ukraine and Russia,” Kristalina Georgieva, head of the IMF, said in an interview with CBS on Sunday.

According to Capital Economics, a Russian default “will not affect the Russian government’s ability to finance itself (beyond what the sanctions have already done) and there seems unlikely to be any significant fallout elsewhere in the world. “.

“Perhaps the greatest risk is that this is a prelude to defaults by Russian companies, whose external debts are more than four times greater than those of the state,” these analysts believe.