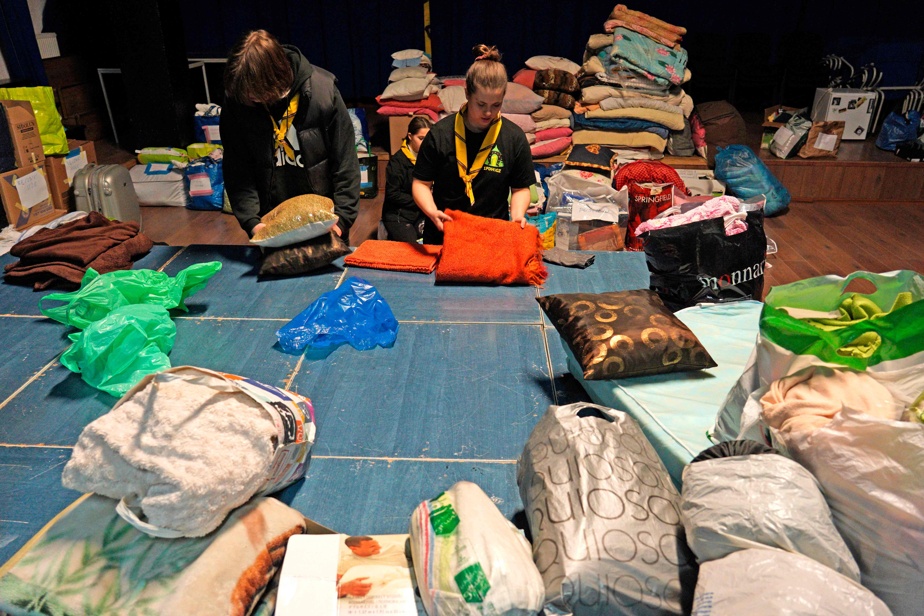 (Podkowa Leśna) Ielena Kleban’s life changed in a few moments when the first Russian bombs fell near Lviv, says this 35-year-old young woman who arrived in Poland where the welcome exceeded her expectations.

“We really didn’t expect Lviv to be attacked from the first day of the war,” she told AFP, sitting among boxes of food in the kitchen of a villa in Podkowa Lesna, a small town of almost 4000 inhabitants, not far from Warsaw.

“But Putin hates Lviv, the spiritual heart of Ukraine,” she insists.

When the first Russian bombs fell in her neighborhood, there was no longer any hesitation: “We had to save the children,” she said. The men stayed to fight or dig trenches.”

With her younger sister, her sister-in-law and their seven children, as well as their grandmother, they hastily gathered some belongings and set off for the Polish border post of Medyka, 60 km away, then to in Warsaw, by car, on foot, then by taxi.

Exhausted but happy, they are now safe, after spending their first night on mattresses on the ground floor of a 1920s house, guests of a family from this residential suburb of Warsaw.

The welcome they receive is only one example among many of the outpouring of solidarity of the Poles with regard to their Ukrainian neighbours, both on the side of the authorities and of civil society.

According to border guards, since the Russian invasion launched on Thursday, nearly 300,000 people from Ukraine have crossed the Polish border, which is also the eastern border of the EU.

The European Commission opened the door to Ukraine joining the EU on Monday, but this is not for tomorrow, despite Kiev’s request for a special procedure to integrate the country “without delay”.

But in Podkowa Lesna, as in the EU states bordering Ukraine, the citizens of the bloc are opening the doors to Ukrainians.

The neighbors bring everything – sheets, blankets, pillows, clothes and food, and toys for the children.

A big pot of soup was also waiting for them, prepared by a couple, a female doctor and a professor of physics at the University of Warsaw. Their son Jan Lusakowski translated the recipe on Google Translate, so Ukrainians know what they are eating.

“We have everything, really everything, even too many things,” says, with tears in her eyes, Inna Ourbanovitch, 33, mother of a 14-year-old girl and a 7-year-old boy. “We did not expect such generosity. A new microwave oven and two strollers for the children were brought in the same evening”.

“Not even a passport”

“I didn’t even have a passport to enter the EU,” says Iryna, 33, on her first trip abroad. His children — Olexandre, a year and a half, and Alina, 14 — had no travel documents either. “Luckily the Polish border guards agreed to let us through only on the basis of birth certificates”.

This weekend, the small town of Podkowa Lesna welcomed around fifty people, mainly in private homes. In Milanowek, the town next door, at the fire station, around 30 camp beds await the arrival of other refugees and another 300 beds can be unfolded at any time.

“Two orphanages in the Kharkiv region are on their way to us, including disabled children,” says Artur Niedzinski, responsible for organizing aid at the Podkowa Lesna cultural centre.

“They are stuck at the border and should arrive within 24 hours if all goes well. Residents of Podkowa Lesna took their cars to pick them up,” he told AFP.

get out of stress

“We should be able to accommodate some 300 people,” said Artur Tusinski, mayor of Podkowa Lesna, who appealed for help on Friday.

The Catholic association Przymierze Rodzin will provide a house. The Catholic Intelligentsia Club has opened a bank account for donations.

“We mainly need food, hygiene products, baby bottles, baby food and nappies. At best money to finance all this. […] All these people will have to be fed. And no one knows how long it will last, ”said the mayor.

The principal of the primary school Agnieszka Hein is already raising the age of the children of the refugees.

“We hope that they will be able to return to their country quickly, but until then they have to be occupied with normal activities to help them get out of the stress they are experiencing,” she says.