It’s Asus’ turn to offer a facelift to its catalog a few days before CES 2023.

Like every year, it’s the all-out battle on the side of the manufacturers before the launch of CES, the annual high mass of tech. It’s Asus’ turn to unveil the new face of its Republic Of Gamers gaming range. On the menu: latest generation hardware, a completely redesigned cooling solution and a generalization of the Nebula label.

The first new features concern the entire Asus gaming catalog. The first information concerns a new cooling technology, with a huge heat sink and fan technology dubbed “Tri-Fan”. It should provide a significant benefit on heat dissipation, which will be anything but negligible given the hardware they will carry (see below).

The other significant development is the democratization of the Nebula standard. As a reminder, this is a proprietary label which designates Mini-LED panels with a high refresh rate, with good color reproduction and comfortable brightness. All ROG laptops featured here will now have it.

The firm starts by giving news of its Strix range, located at the very top of the food chain in terms of raw performance. The chassis has been redesigned to accommodate large screens of 16 and 18 inches in 16:10 format. The 16-inch model, in particular, will benefit from the new QHD Mini-LED 240 Hz screen.

As you might expect, the manufacturer did not do things by halves on the hardware side. These new Strixes will be entitled to the ultimate in current hardware; they can be equipped with an Intel Core i9-13980 HX or the new Ryzen from AMD. On the GPU side, they can go up to the titanic RTX 4090. Unsurprisingly, there is therefore not the slightest concern to be made on the raw performance side.

There is also something new on the side of machines that are a bit less exuberant, but much more mobile, with the update of the Zephyrus range. Asus particularly insists on the new Zephyrus M16, which has apparently been “redesigned from the ground up”.

Again, we will find a new Nebula screen. In this case, it is a QHD 240 Hz panel capable of offering an incredible 1100 nits of brightness, all with 100% coverage of the DCI-P3 gamut.

Like the Strix, this smaller caliber model will also be able to carry the i9-13980 HX – RTX 4090 couple. Even more than for the big machines in the Strix range, this will be a very interesting test for the new device. cooling; we can’t wait to see if Asus will be able to exploit this super-powerful hardware without a huge performance bottleneck.

The other members of the Zephyrus family also got a facelift. It starts with the brand new G16 which arrives with an i9-13900H and a portable version RTX 4070. Hardware a little less monstrous than its big brothers, but which still promises to put the cooling to the test. This model will also be entitled to a new Nebula QHD 240 Hz screen.

The G14 has also been updated. The 2022 edition was a superb machine, and this new version looks at least as attractive with the addition of the new Nebula screen. Note however that unlike the G16 model, this little thumb will be able to carry an RTX 4090. A graphics card that seems quite disproportionate for a small 14-inch machine that was already capable of running all the AAAs of the moment. Again, the new cooling system will have to respond.

Note also that Asus has updated its dual-screen laptop, the ROG Zephyrus Duo. 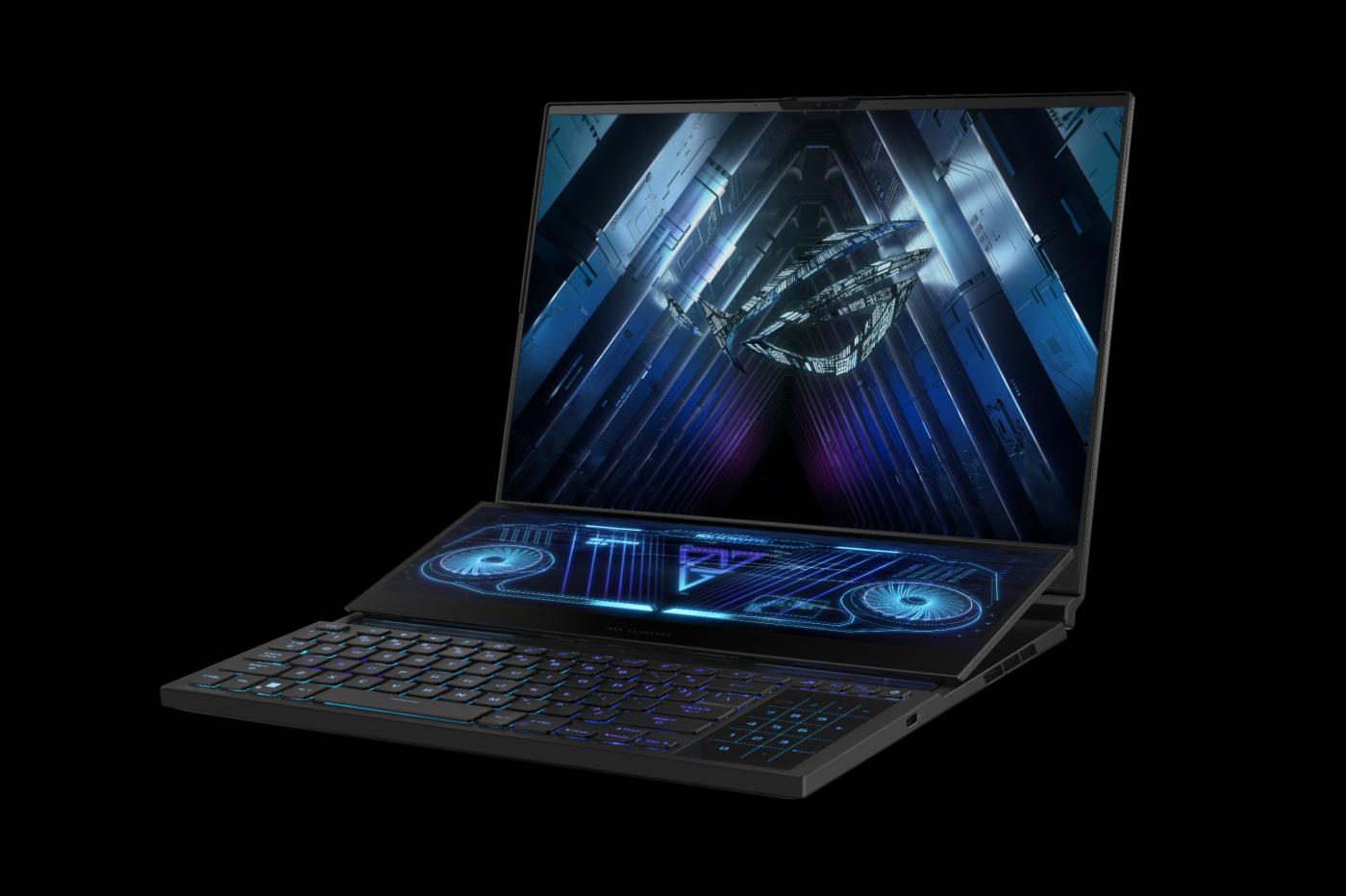 Finally, the Flow models also got an upgrade. The small ROG Flow X13, for example, is now equipped with an AMD Ryzen Zen 4 processor and a portable RTX 4070. This is an extremely important upgrade on the graphic level.

And there again – you will have understood that this is a recurring theme with this new generation of laptops – there is reason to be a bit skeptical; is it really reasonable to integrate such a powerful and greedy card in a small machine of this kind? The answer will largely depend on temperature management and battery life.

The Flow Z13, by comparison, feels much more balanced; its new RTX 4060 seems better suited to a 13-inch machine. And since it also got a new Nebula QHD screen, it’s a model that looks quite interesting.

The patriarch of this new Flow range will be the X16, equipped with an i9-13900H and an RTX 4070 Portable. Its Nebula HDR Mini LED touchscreen has been improved, with 1100 nits of maximum brightness and a refresh rate of 240 Hz.

Note that these three devices are also equipped with a Corning Gorilla Glass DXC coating, a special coating that increases hardness by 40% while considerably reducing surface reflections. Good news for those who tend to struggle with light.

Finally, this Flow 2023 family is also accompanied by a brand new ROG XG Mobile. As a reminder, this is an eGPU that can be connected to a relatively modest laptop to raise its graphics performance to the level of a very high-end desktop PC. This new version will be entitled to an RTX 4090; enough to transform any ROG laptop into a real racing beast.

Availability and pricing of these products have not yet been announced; we will have to wait at least until the official announcement at CES.