It’s summer and so it’s the season for Asus’ new gaming smartphone. Here are the new Asus ROG Phone 6 and ROG Phone 6 Pro, equipped with the Qualcomm Snapdragon 8+ Gen 1 SoC

It’s summer and we know that it’s often at this time that Asus in turn draws its new smartphones or at least the one that interests the most gamers among you. Also, after the rumors, Asus has just formalized its new smartphone for gamers. Meet the ROG Phone 6 and ROG Phone 6 Pro. No Ultimate version since it is the Pro version which is intended for the most demanding. It should be noted that this year, Asus returned to an announcement in summer and more frontally compared to the behemoths of the market.

Still, ROG Phones remain premium smartphones for gamers. And it’s not for nothing that Asus waited for the summer since the ROG Phone 6 embeds the Qualcomm Snapdragon 8+ Gen1 SoC, the fastest SoC from the Californian founder. As had already been the case in previous years, Asus is targeting an audience who knows exactly what they want, who are looking for the best possible performance for gaming. Anyone who hesitates with a Samsung Galaxy S22 Ultra, an Oppo Find X5 Pro or more recently a Vivo X80 Pro is clearly not the target.

Also, like last year, Asus has put the odds on its side and we find high-end characteristics with a Qualcomm Snapdragon 8+ Gen1 SoC (10% faster than a Snapdragon 8 Gen 1 in CPU & GPU and 30% more energy efficient), an Adreno 730 GPU, 256 to 512GB of internal memory in UFS 3.1, 12GB or 16GB of LPDDR5 RAM (the Pro version offers 18GB), WiFi 6E, Bluetooth 5.2, NFC, a USB 3.1 Type-C port on the side and bottom of the smartphone, all in a weight of 239g! There is also a quality and HiRes Audio certified jack. The AeroActive Cooler goes to version 6 by being even more imposing with now not two but four configurable buttons. Note that it does not come standard with the ROG Phone 6. It is offered as an option at 89 euros. 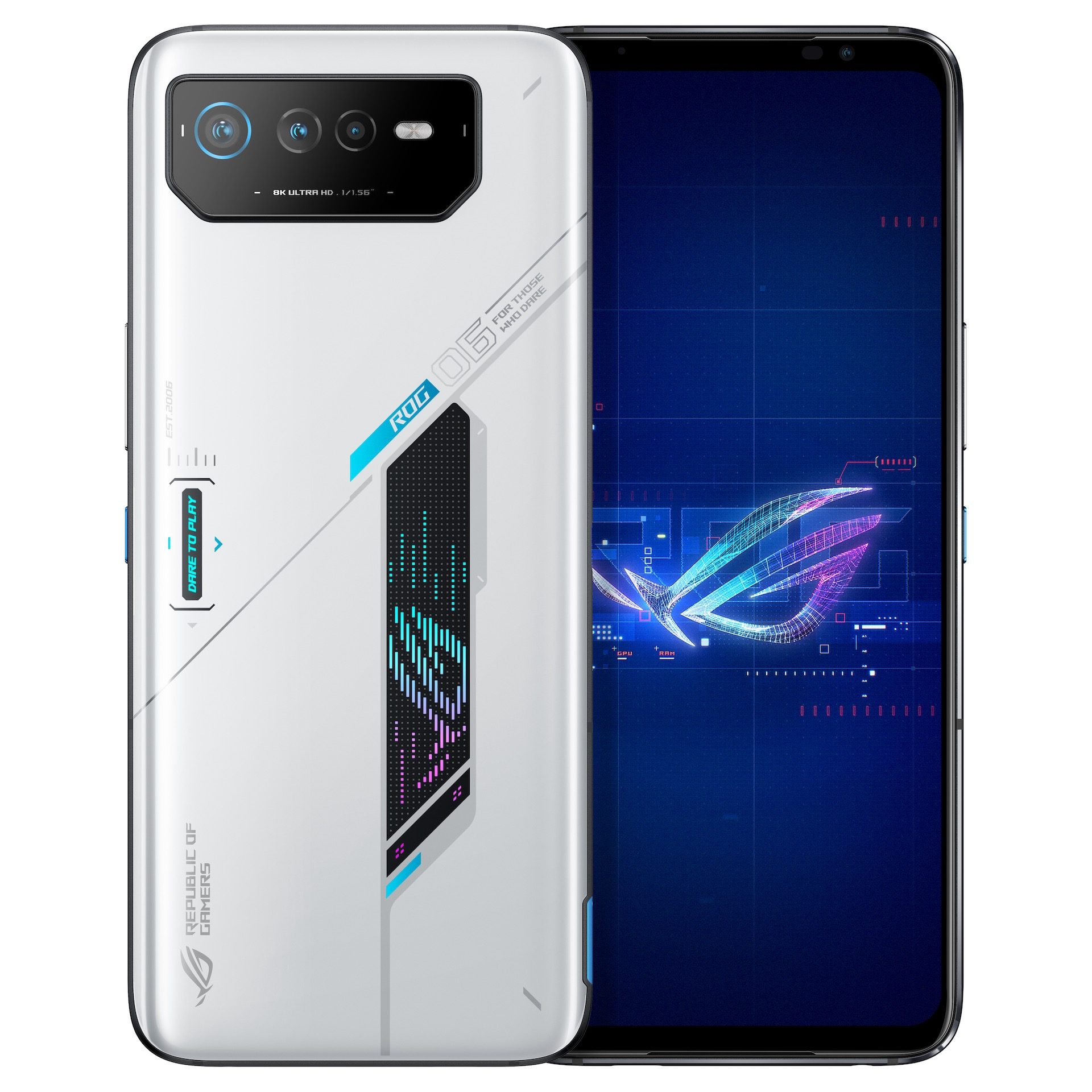 Like its predecessor, the Asus ROG Phone 6 packs an impressive 6000mAh battery which splits into 2 x 3000mAh batteries, allowing it to be recharged to 4200mAh in just 30 minutes. This also extends the life of the batteries themselves. We find the HyperCharge technology which allows wired charging of 65W. Like last year, the chargers continue to be part of the packaging and we note that there is no more ventilation in the back since the cooling system is done internally.

The photo and the screen 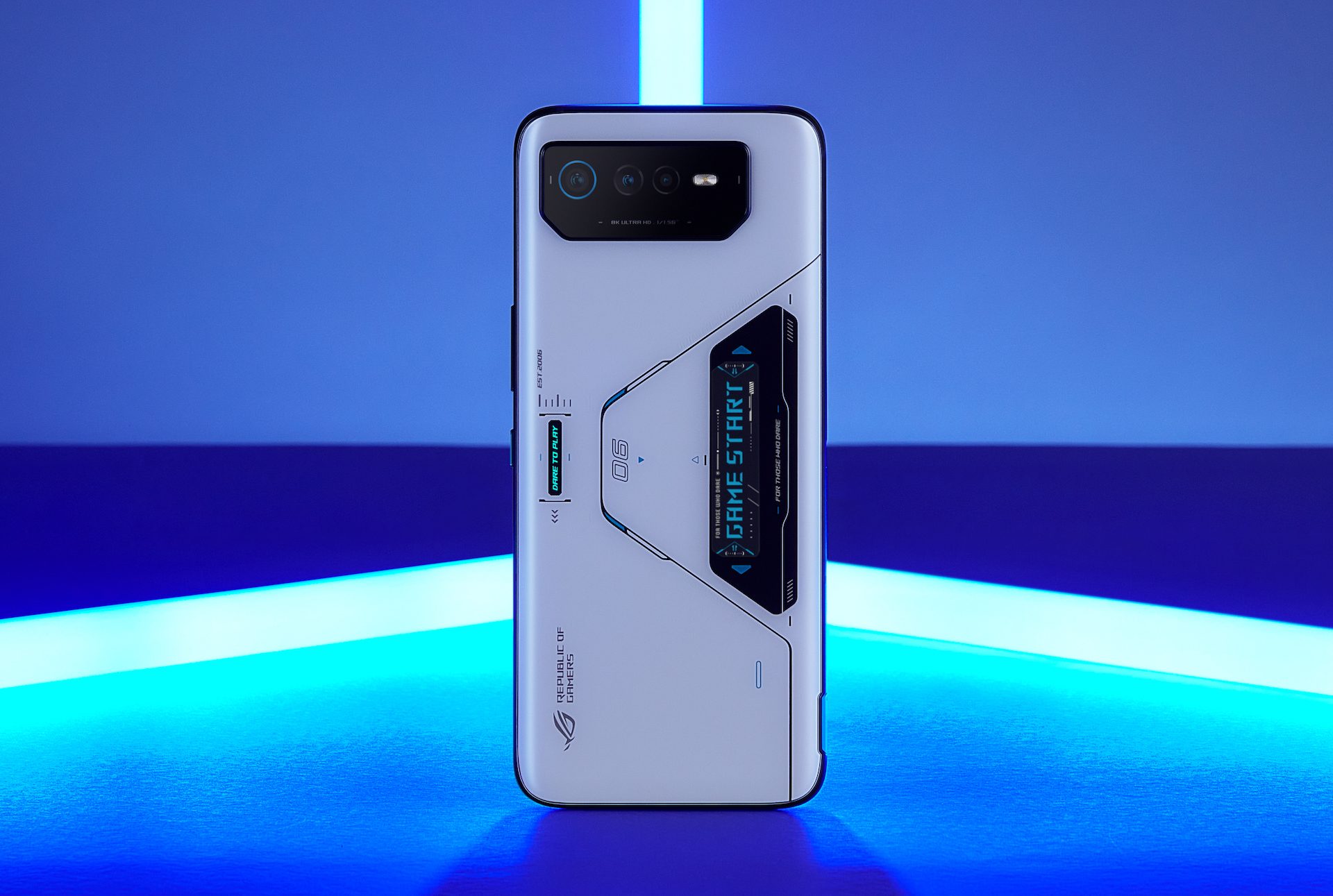 On the audio side, the Asus ROG Phone 6 offers front stereo speakers and Dirac HD Sound support, optimized with Asus headphones. Also designed for streaming, the ROG Phone 5 is equipped with 3 microphones and the position of the latter has been designed for use in landscape mode, just like the front camera which is offset so as not to be bothered by the hands of users in streaming case.

For the screen, we use the same recipe which worked very well last year. Also, the Asus ROG Phone 6 offers an AMOLED Gorilla Glass Victus panel with a Full HD + definition of 1080×2448. The diagonal is 6.78 inches in the 20.4:9 format. Of course, even if we don’t need it yet, we find a refresh rate of 165Hz, as well as support for the DCI-P3 profile, support for HDR 10+ and touch latency with a feedback of only 23ms . 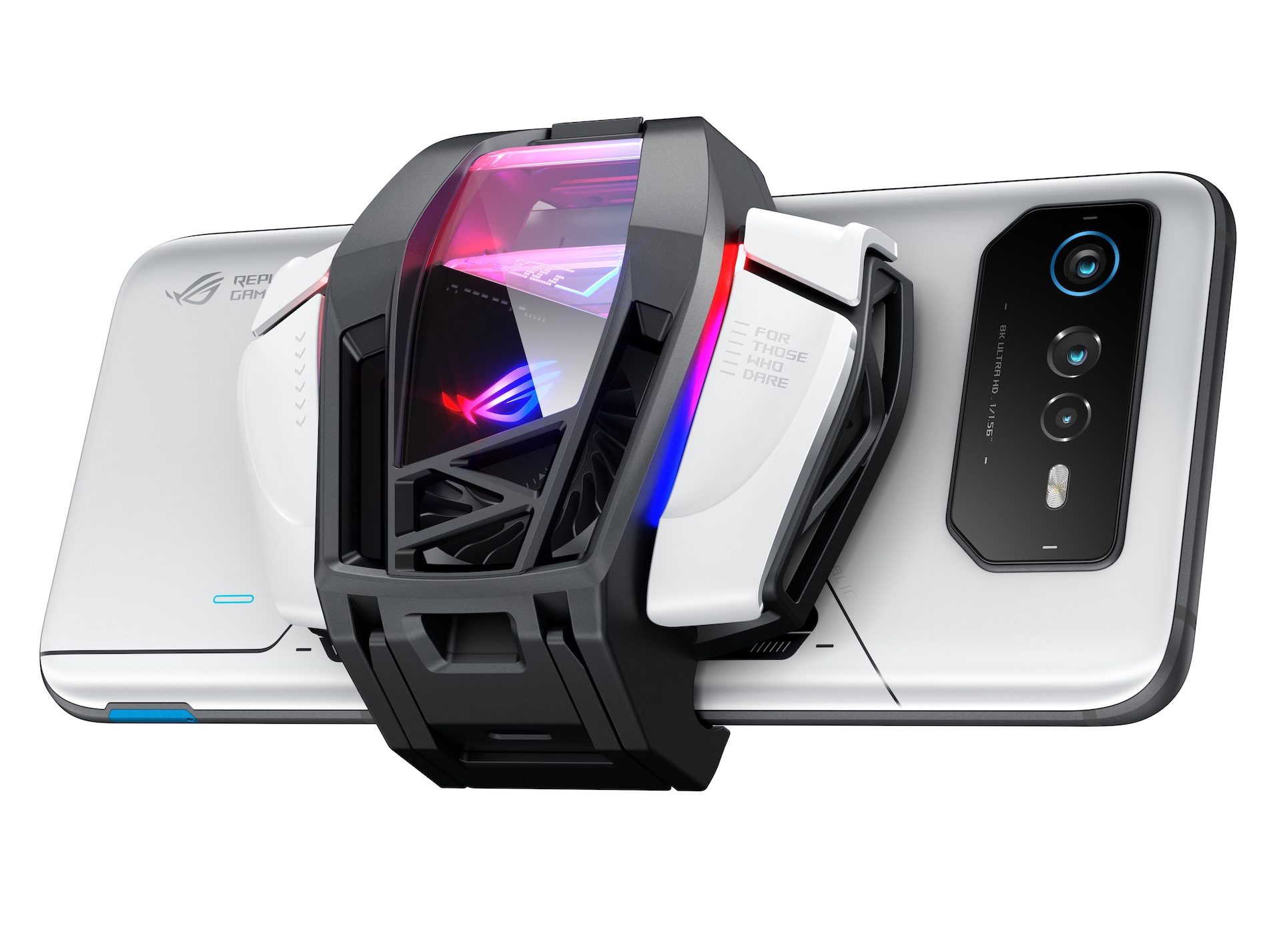 And for the rest

And finally, because it is above all a gamer’s smartphone, which is a bit of a sinews of war for Asus, we find the Air Trigger which goes to version 6, always faster and with even less latency. As a reminder, the Air Trigger 6 are sensitive keys that allow you to simulate pressure like on the Google Pixels when the smartphone is held in portrait mode. But in landscape mode, it mainly allows you to simulate the L and R buttons like on a real controller. You can even configure a slide, a short or long press, etc. And finally, Asus has obviously taken over its application dedicated to games, Game Genie which allows all kinds of actions such as deactivating notifications or calls, locking the brightness, etc. 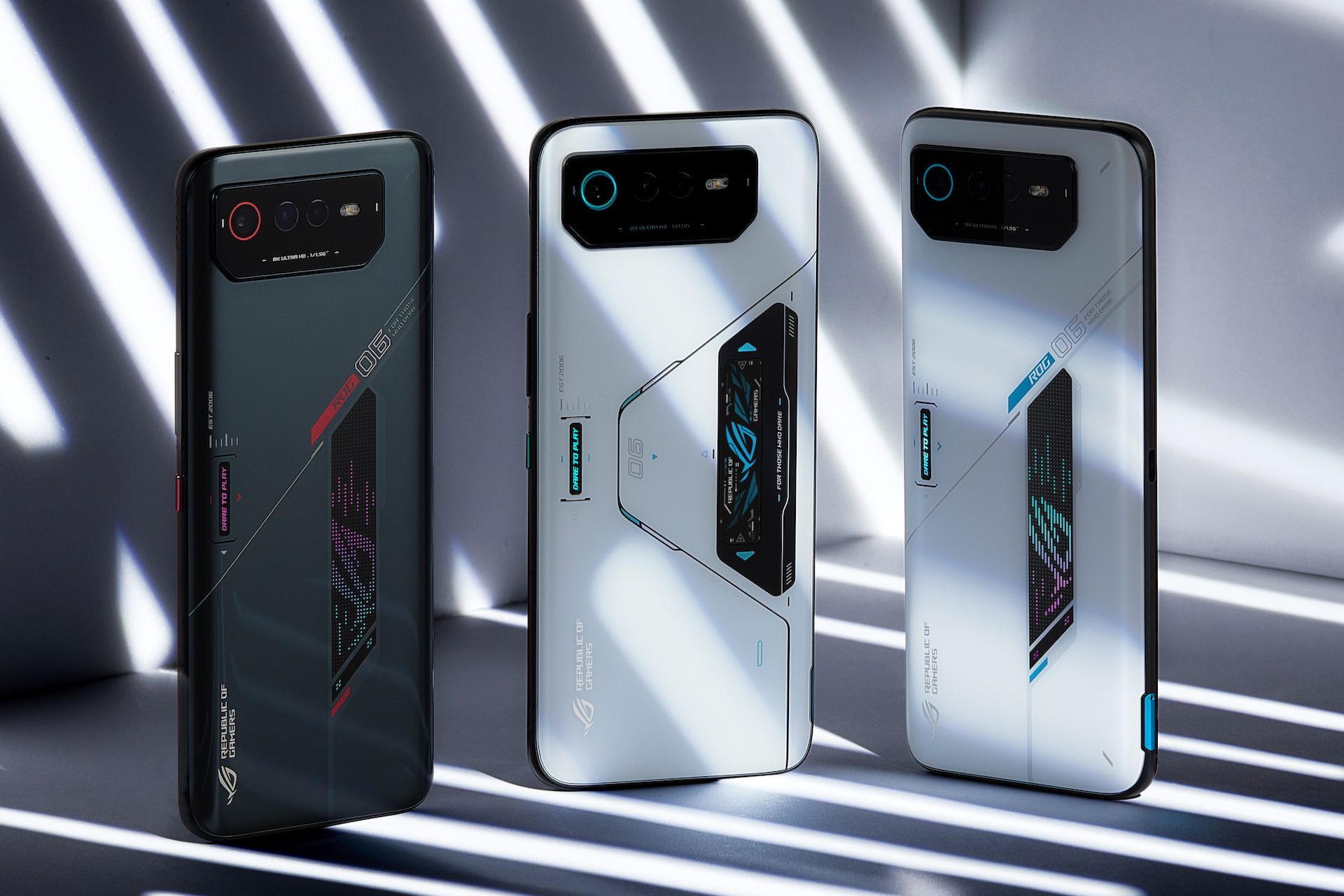 This year, the ROG Phone 6 and its Pro version are in themselves quite close with similar basic characteristics. We thus find the same 6.78-inch screen, the same SoC Qualcomm Snapdragon 8+ Gen 1, the same photo block on the back and on the front. Suddenly, the first difference is on the back with a ROG RGB logo on the ROG Phone 6 while the ROG Phone 6 Pro offers a PMOLED ROG Vision screen that can be personalized. 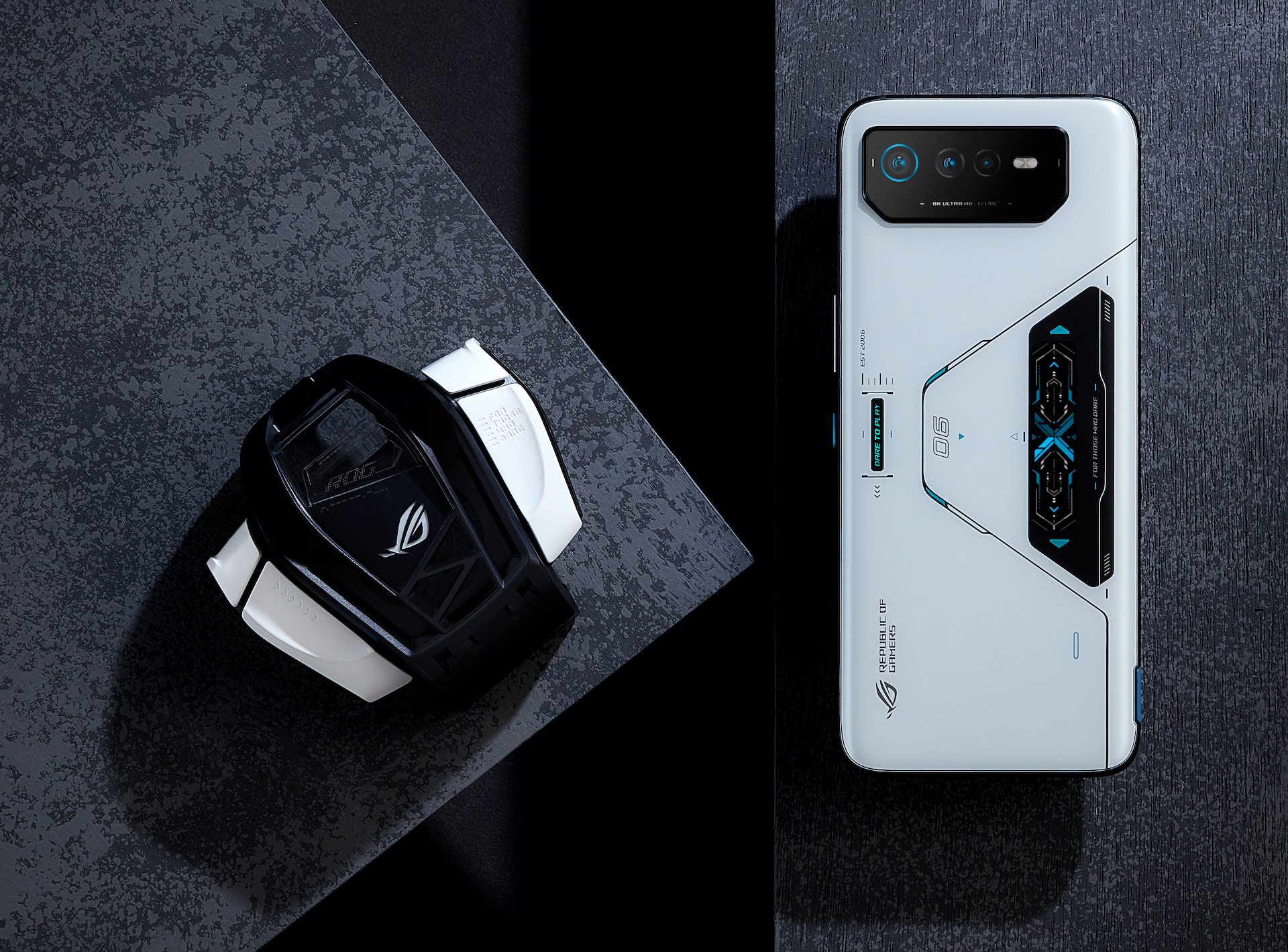 In terms of memory, the ROG Phone 6 Pro is the only one to offer 18GB of RAM. Moreover, it is only available in 18GB RAM version with 512GB of internal memory. Similarly, the ROG Phone 6 Pro is not available in a Phantom Black version. That’s it, it’s all in terms of difference and we can say that it is above all cosmetic and that the 18GB of RAM should not influence performance.

Taking advantage of the launch of these new ROG Phone 6, Asus took the opportunity to also launch a range of wireless and wired headphones. We start with the Cetra True Wireless Pro (259.99 euros) which can work both wirelessly and wired via USB-C. There are also the Cetra True Wireless (129.99 euros), purely wireless headphones, the ROG Delta S Core (109.99 euros), a lightweight 270g headset or the ROG Delta S Wireless (199.99 euros), a wireless gaming headset that can be used in 2.4GHz or Bluetooth mode.

But that’s not all for Asus’ mobile ecosystem. Indeed, if we obviously find the AeroActive 6 fan (89 euros), Asus also offers glass screen protection (29 euros), shells and its famous ROG Kunai 3 controller (119 euros) in a version optimized for the ROG Phone 6 and for the first time in white. 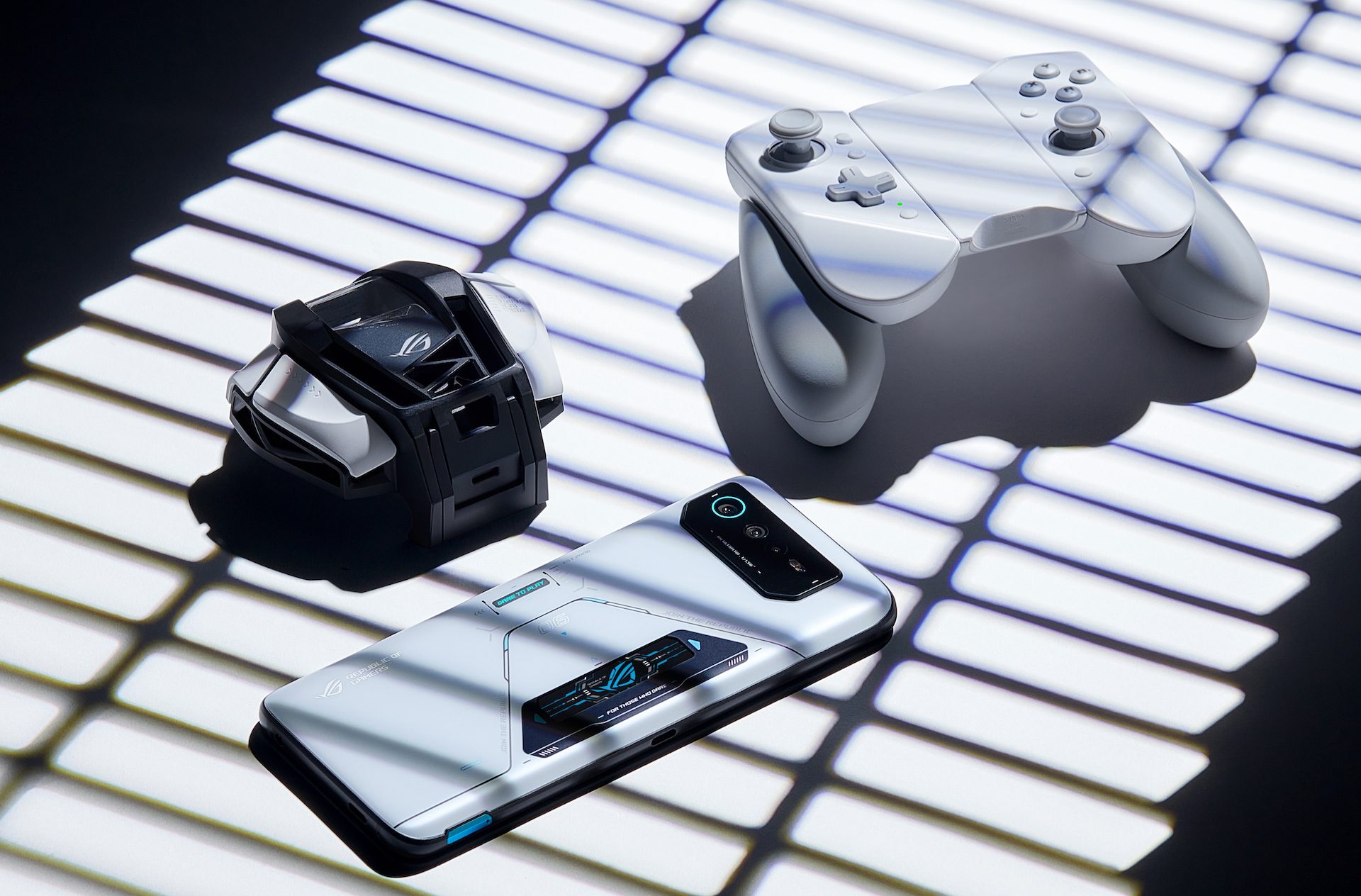