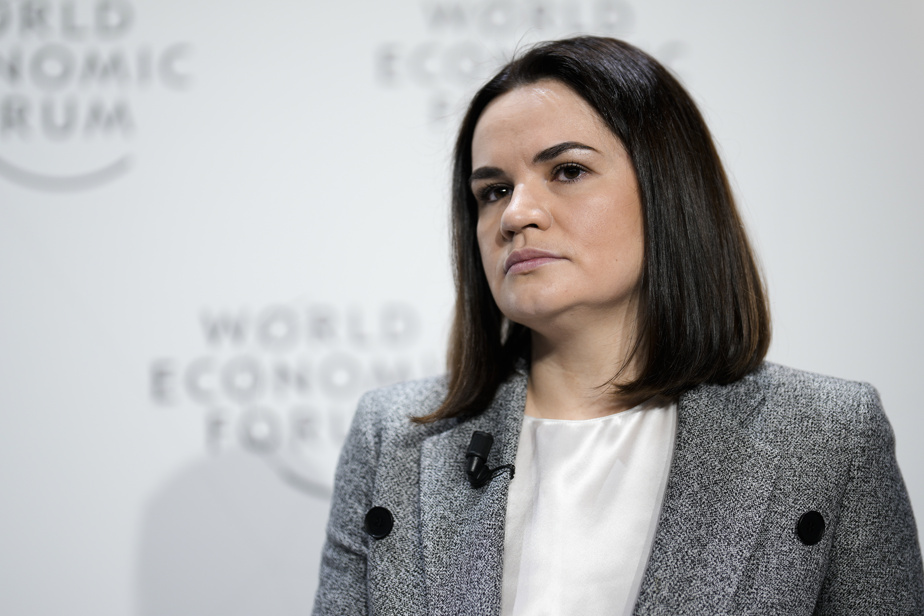 (Moscow) The trial in absentia of the Belarusian opponent in exile Svetlana Tikhanovskaya opened Tuesday in Minsk, in full acceleration of the repressive machine of the authoritarian regime of President Alexander Lukashenko, of which she has become the pet peeve.

A refugee in Lithuania, Svetlana Tikhanovskaya, 40, is the target of a dozen charges, including those of high treason and “conspiracy to seize power unconstitutionally”.

In an interview Monday with AFP, she called this trial a “farce” and “personal revenge” by Alexander Lukashenko against the one who shook his power in 2020.

During the summer of 2020, Belarus was shaken by a historic protest movement to denounce the controversial re-election of the authoritarian leader, in power for nearly three decades.

Svetlana Tikhanovskaya, who had run for president in place of her imprisoned husband, had during the campaign gathered crowds across the country, raising hopes for change.

Forced into exile, the one who once presented herself as a simple stay-at-home mother is now the face of democratic forces in Belarus and the enemy of a regime whose brutal abuses she tirelessly denounces.

Four allies in exile of the opponent – Maria Moroz, Pavel Latouchko, Olga Kovalkova and Sergei Dylevski – are also judged with her.

Their trial takes place in a context of worsening in recent weeks of the relentless repression orchestrated by the regime of Mr. Lukashenko, with a succession of legal cases against opponents.

These trials generally take place behind closed doors, in the most total opacity.

“I don’t know how long this trial will last, how many days, but I’m sure they will sentence me to many, many years in prison,” said the opponent.

Tuesday, from the World Economic Forum in Davos (Switzerland) where she was invited, Mme Tikhanovskaïa considered that Alexander Lukashenko was a “pitiful dictator” and was “afraid of the democratic future” of Belarus.

“Belarus will be a free, independent, peaceful and successful country,” she added.

If the opponent seems safe from the jails of Minsk because of her exile, the Belarusian authorities have found another way to punish her by announcing Monday new proceedings against her husband, currently imprisoned in Belarus.

A popular blogger who fiercely criticized Mr. Lukashenko, Sergei Tikhanovski was sentenced in December 2021 to 18 years in prison, in particular for “organizing massive unrest” and “inciting hatred in society”.

On Monday, the Belarusian authorities announced that they had charged him with “insubordination” with regard to the prison administration, a charge punishable by two additional years in prison.

After the 2020 protest movement, the Belarusian regime launched a relentless crackdown on all critical voices with mass arrests, forced exiles and imprisonments of opponents, media officials and NGOs.

According to the Viasna center, the country currently has more than 1,400 political prisoners.

And, more than two years after the events, the repression is in full swing.

In early January, a court began trying Ales Bialiatski, an imprisoned democracy activist, co-winner of the 2022 Nobel Peace Prize and founder of the Viasna Center. Mr. Bialiatski and his associates risk up to 12 years in prison.

The trials of several collaborators of the information site Tut.by, the main independent media in Belarus, including its editor-in-chief Marina Zolotova, also began behind closed doors.

And on Monday, the closed trial of a Belarusian journalist, Andrzej Poczobut, a figure of the Polish minority, opened. He faces up to 12 years in prison for calling for international sanctions against Belarus.

“Political repression by the Lukashenko regime has reached an unprecedented level”, declared in a press release the head of European diplomacy, Josep Borrell, for whom these trials “aim to silence all independent voices and lock the space which left to the democratic debate”.