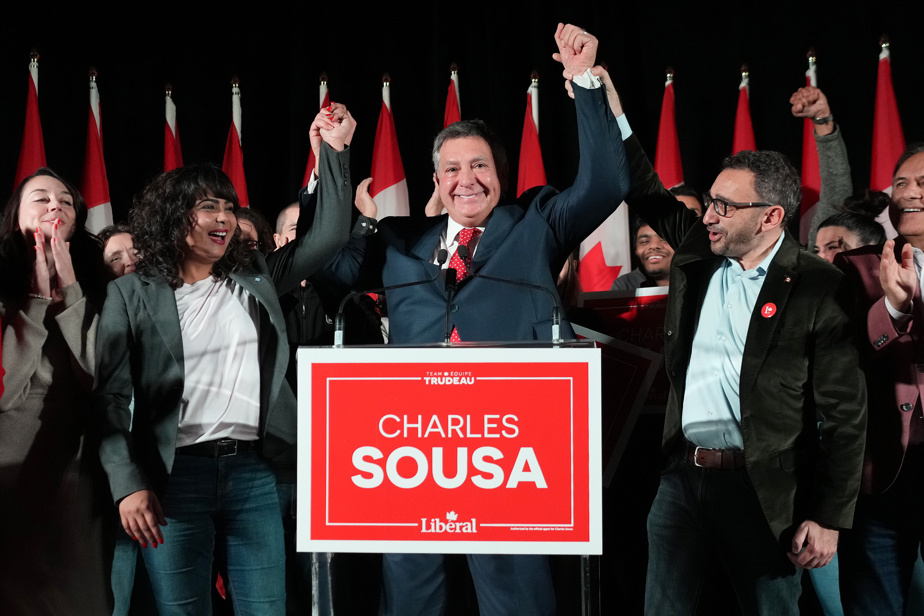 (OTTAWA) Justin Trudeau’s Liberals easily retained the riding of Mississauga-Lakeshore in Monday’s by-election, dealing the Conservative Party the first setback since Pierre Poilievre was elected leader in September, in a region that remains a must for any party aspiring to take power in Ottawa.

Liberal candidate Charles Sousa, who served as Ontario’s finance minister from 2013 to 2018, won with 51.2% of the vote, far ahead of Conservative candidate Ron Chhinzer, a police officer with the Regional Police Service of Peel in Mississauga, which received 37.3% of the vote. The NDP fared poorly, with NDP candidate Julia Kole winning just 4.9% of the vote.

With just under 20% of the ballots counted, the Liberal candidate showed up at a rally held in Mississauga late Monday night and declared his victory. More than a hundred of his supporters were gathered on site to welcome him.

“As your representative in Ottawa, I want you to know that I am here to support you, to work with you and to be pragmatic in finding the right solutions to the challenges we face,” said Mr. Sousa. during his victory speech. It is an honor to serve this great community and to join the Ottawa team that shares these values. »

A record number of 40 candidates were in the running during this by-election, including 35 independent candidates who wanted to denounce the Liberals’ refusal to honor their 2015 promise to change the voting system.

Voter turnout was low. Only 26.48% of the approximately 89,000 registered voters exercised their right to vote.

In a rare press briefing last week, Mr. Poilievre tried to play down the chances of a victory by saying that the riding of Mississauga-Lakeshore remains a Liberal stronghold. In the past 30 years, the Conservative Party has only won there once, in 2011, when Stephen Harper managed to form a Conservative majority government.

Not taking victory for granted, Liberal strategists ensured that a large number of cabinet ministers marched through this riding during the campaign. Prime Minister Justin Trudeau also campaigned alongside his candidate Charles Sousa.

This agreement should make it possible to ensure the political survival of the Trudeau government, which is in a minority in the House of Commons, until June 2025. In exchange for the support of the NDP during the votes of confidence on the budgets, among other things, the Liberal government has pledged to follow up on some of the demands dear to Jagmeet Singh’s troops, including the creation of a dental care program, the fight against climate change and investments in health.

At a press conference on Monday, Mr. Singh said that this agreement will become void if the Trudeau government does not take the necessary financial means to resolve the “health care crisis for Canadian children”.

For three years, the provinces have been calling for an increase in health transfers of some $28 billion per year. This increase would mean that Ottawa pays 35% of the total bill related to the health care system in the country, compared to 22% currently. But the Trudeau government continues to turn a deaf ear to this request, even though it has promised a few times that negotiations would take place on this subject once the pandemic is over.

Last week, the provincial premiers issued yet another cry of alarm in this matter, demanding a meeting at the start of the new year with Mr. Trudeau to discuss an increase in transfers.

Like the Bloc Québécois, the NDP is urging the federal government to increase transfers to the provinces at a time when the health care system is collapsing after two years of the COVID-19 pandemic. Staff shortages, exhausted workers, postponed operations, growing waiting lists: the ills afflicting the network are multiple.

This Liberal victory also came on the day that former Minister of International Trade in the Trudeau government, Jim Carr, died. Mr. Carr, who also served as Minister of Natural Resources, had represented the riding of Winnipeg South Central for the Liberals since 2015. In 2019, after his re-election as an MP, he learned that he had a multiple myeloma, a blood cancer, and he underwent a stem cell transplant in 2020.

His death caused consternation among MPs from all political parties. The House of Commons adjourned its work a few minutes after Liberal MP Kevin Lamoureux announced the sad news to the elected officials who were present. Mr Carr had given a speech in the Commons as recently as last Thursday.