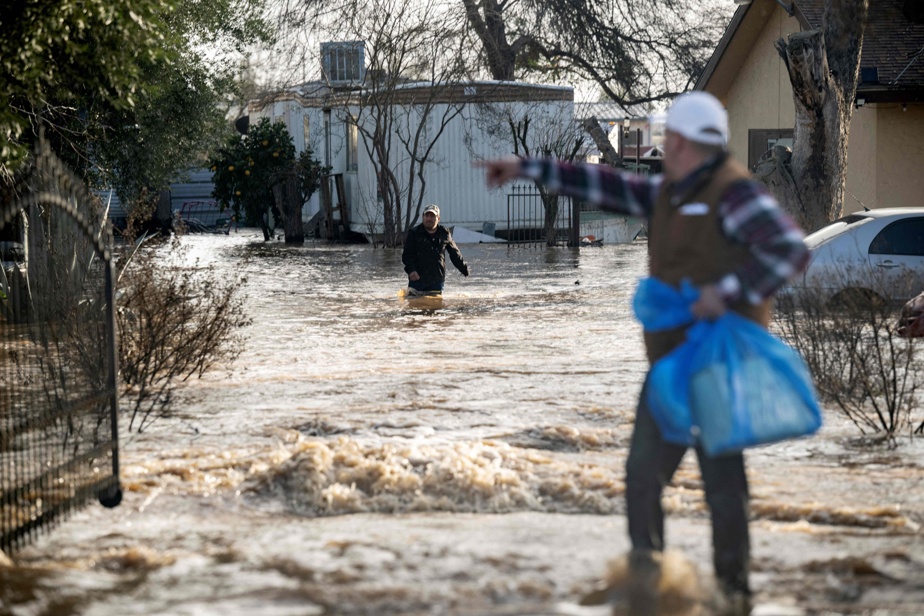 (Montecito) A major cyclone is expected to hit California on Wednesday bringing up to 18 centimeters of rain, weather services have warned, as tens of thousands of residents have been ordered to evacuate after successive storms have already killed at least 17 people.

A search for a five-year-old boy who was swept away Monday in Paso Robles, a small town halfway between Los Angeles and San Francisco, has been suspended due to the dangers to divers in the stormy waters, the report said. Fox News channel quoting a San Luis Obispo County official.

Some 66,000 homes and businesses in the most populous state in the United States were without power Wednesday morning, according to the specialized site PowerOutage.us.

The expected new storm will hit northern California and is expected to bring heavy snowfall to the Sierra Nevada Mountains, according to the US National Weather Service (NWS).

California is currently undergoing “an endless onslaught of atmospheric rivers,” the likes of which have not been seen since 2005, according to the NWS. Rarely do these “rivers of the sky”, which form with water vapor from the tropics and travel to pour down waterspouts down the west coast of the United States, occur.

“A massive spinning cyclone off the West Coast will again bring heavy rainfall and gusty winds (Wednesday), this time targeting Northern California,” the NWS wrote in its latest advisory.

The bad weather will not remain limited to California, as the system responsible for Tuesday’s rains continues its path across the country and is expected to bring thunderstorms to the central and southern regions, adds the NWS.

According to California Governor Gavin Newsom on Tuesday, at least 34,000 people have been asked to flee their homes.

“We are not at the end of our troubles. We expect the storms to continue at least through January 18,” the governor told reporters. “So far, we have 17 confirmed deaths. I emphasize this tragically, because only these deaths are confirmed. »

These deaths represent “more than the forest fires of the last two years”, he insisted.

North of Los Angeles, near Santa Barbara, the coastal community of Montecito, a celebrity haunt where Prince Harry and Meghan Markle live, was under an evacuation order from Monday to Tuesday amid post -noon.

This enclave, where actress Jennifer Aniston and television presenter Oprah Winfrey have luxurious villas, concentrates extreme climatic phenomena to which California is subjected, hard hit by drought for two decades.

Five years ago, a massive fire devastated the mountains surrounding Montecito. As a result, the absence of vegetation makes it very vulnerable to landslides. In January 2018, mudslides caused by heavy rains killed 23 people.

“Because the mountains are right there, when it really rains […], it quickly becomes dangerous, ”Daniel DeMuyer, a resident of the city, told AFP, where several roads and some houses were completely flooded. “It’s the price to pay to live in such a beautiful place, when it rains like that, it does a lot of damage. »

Other regions have been the subject of evacuation orders from the authorities, such as in Santa Cruz County, near San Francisco, where a pier was destroyed last week.

While it is difficult to establish a direct link between these series of storms and climate change, scientists regularly explain that warming increases the frequency and intensity of extreme weather events.

Last week’s storm had already knocked out power to tens of thousands of people, caused severe flooding and triggered landslides. It had come just days after another deluge of rain on New Year’s Eve.

The exceptional rains of the last few days have already exceeded the average annual rainfall in several regions.

However, they will not be enough to replenish the water reserves in California. Several winters of above-normal rainfall would be needed to compensate for the drought of recent years, experts say.