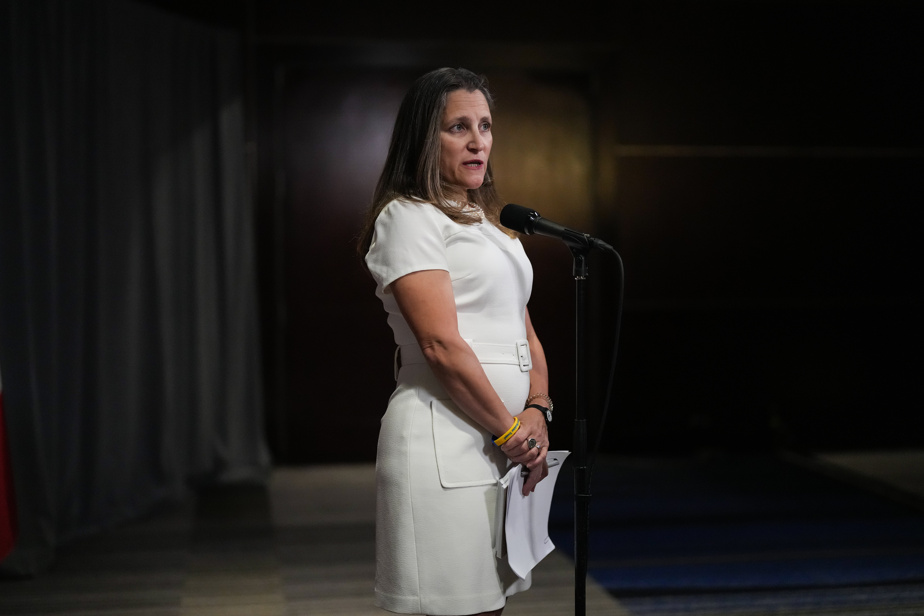 (Washington) Deputy Prime Minister Chrystia Freeland says Canada is leading, not lagging behind, the global shift to “green energy” in the wake of Russia’s invasion of Ukraine.

Mme Freeland raised analysts’ eyebrows this week during a state of affairs address in Washington, where she urged governments to spend more “domestic political capital” to mitigate a growing energy crisis — a message that Ottawa should also take heart, say observers.

On the contrary, Canada is shifting into high gear when it comes to launching green energy projects, Ms.me Freeland, citing federal investments in the nation’s critical minerals sector and the net zero components of the Strategic Innovation Fund as examples.

“What I really wanted to do was tell the rest of the world, ‘Look, Canada understands. Here’s what we’re doing,” said Minister Freeland during a press conference held at the end of the week-long annual meeting of the International Monetary Fund and the World Bank.

The key to the energy transition, according to Mme Freeland, is to put in place government policies and investments and attract more private capital to these projects. She hopes her speech on Tuesday will inspire some governments and businesses to act.

“I don’t mean in any way to suggest that Canada is behind. Anyway, I think Canada is really leading on so many issues here. But we need to do even more,” continued Mr.me Freeland.

This strategy will continue to include liquid natural gas, she added, describing it as an “important transition fuel”, not only for countries in Europe feeling the impact of the war in Ukraine, but also in the developing world, where there are fewer alternatives to coal.

Some observers say Canada has been a laggard in building facilities to export liquefied natural gas, or LNG — most recently, when Prime Minister Justin Trudeau responded to calls from Germany suggesting that such projects should not didn’t make business sense.

“(LNG) will be an important contributor to the green transition in the world and to the energy security of our partners, recalled Mr.me Freeland. As the Prime Minister said over the summer, we will always look for economically viable LNG projects. »