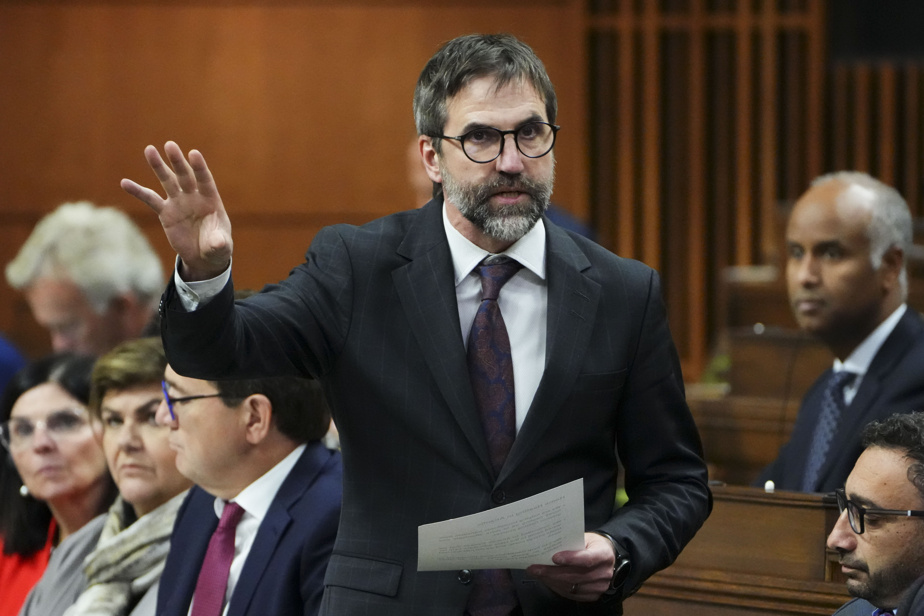 (Ottawa) Environment Minister Steven Guilbeault says banks and other financial institutions must review how they report carbon price rebates, after another round of payments were sent to Canadians without the origin of the money being clearly indicated.

Deposits sent Friday ranged from $186.25 for a family of four in Ontario to $208 in Manitoba, $269.75 in Alberta and $275.25 in Saskatchewan. The amounts differ because the carbon price paid varies according to the fuel sources used for heating and electricity.

Also, depending on where you do your banking, deposits also went by very different names.

Some have seen payments with the words “Climate Action Incentive Canada”, which is the official term the federal government uses to describe carbon price rebates – and this is the term it asked banks to use to name the deposit. Not all did.

Some Canadians have received a deposit called “Canada CAI”, while others see a “Canada TEF Deposit” or a “Canada TEF Credit”. In one instance, recipients see the drop confusingly named “NO Climate Action Incentive.”

“It is critically important that Canadians not only receive these rebates, but that they are clearly informed about (the details) of obtaining the rebate,” said Minister Guilbeault. This way, households can get the most out of their energy decisions and rebates. »

Liberal carbon pricing policy is based on the belief that people will change their consumption habits if the price they pay for greenhouse gas emitting fuels increases.

A “gift” to the Conservatives

The rebates, which you receive regardless of the carbon price you pay, were added to ensure that families are not worse off financially because of the policy. But the government hasn’t been very good at communicating that.

Ken Boessenkool, a conservative strategist at Sidicus Consulting who favors carbon pricing as a solution to climate change, said if carbon pricing fails, liberals will have only themselves to blame.

“They should have spared no expense explaining to Canadians that they would get full refunds for all taxes paid,” he argued.

“It shouldn’t be surprising that they’re being attacked for raising taxes, because they haven’t done much to promote the fact that they just aren’t. They have given the Conservatives an important and permanent gift. »

Winnipeg Liberal MP Terry Duguid, parliamentary secretary to the environment minister, said the move to quarterly payments was to make them more visible. But when the first payment was not clearly identified in July, his constituency office received calls from people wondering where their reimbursement was.

The government has asked the banks to fix the problem this time around, and is frustrated that it hasn’t happened across the board.

Mr. Duguid indicated that the government would follow up with the banks again.

“What we’re trying to do as a government is bring some consistency in communications around this,” he said in an interview.

A Scotiabank spokeswoman told The Canadian Press that the payment is now called a “climate action incentive” for customers who use the mobile app, and the bank is working to bring it up to date. day for all platforms.

According to Duguid, the Conservatives are “misinformation experts” on carbon pricing. “They just talk about the price of pollution, or what they call the carbon tax,” he said. But they don’t talk about the fact that at the end of the day, eight out of ten families do better, they receive more on climate incentive payments than they pay at the pump. They never mention that. They never will. »

Conservative Leader Pierre Poilievre has pledged to “eliminate the carbon tax” if he wins the next election. He and his caucus hammer the government on its intention to triple the price.

During question period on Monday, Mr. Poilievre called on the government “to cancel its plan to triple the tax”.

The “tripling” of the price of carbon, to $170 per tonne from $50 per tonne, will take effect over the next eight years. It will drive the cost up to 37 cents per liter of gasoline in 2030 from 11 cents currently, and to 33 cents per cubic meter of natural gas from 10 cents.

Additional amounts are added for a spouse and for each child in the household.