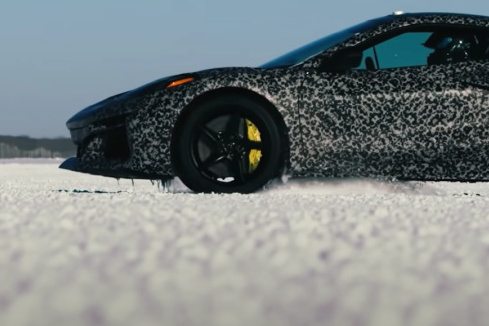 From the assembly of its first example on June 30, 1953, to the engineering prowess personified by the current mid-rear-engine generation, the Corvette exists for one fundamental reason: to cement the supremacy of General Motors (GM). It is with this in mind that the American manufacturer unveiled its game last week, confirming through the voice of its president the unveiling next year of hybrid and later electric liveries of the icon.

Mark Reuss chose to communicate the news on the LinkedIn social network, an unusual approach for information of this stature. This undoubtedly confirms the multiple dimensions of this shift, including that of the promises of electrification made to shareholders a few days before the filing of the multinational’s financial statements. LinkedIn is more focused on professional relationships.

Beyond the communication strategy, the arrival of these versions is immensely revolutionary for a model whose history has been told by the cavernous sounds of eight-cylinders. However, very little is known at this time about the form that these new mechanical configurations will take.

A video accompanying Reuss’s short post nevertheless directs us to certain avenues of explanation. We see a Corvette draped in camouflage making a flying start on a snowy surface. The short 25-second clip is then put into slow motion to see that all four wheels are used to provide traction. Everything is accompanied by the characteristic sound of a V8.

This proves that this hybrid livery will be entitled to an all-wheel drive as well as a V8 to support its performance, confirming the rumors circulating for years about it in various American media. These show a configuration with an electric front engine juxtaposed with a twin-turbo V8 placed in the rear central position. The power obtained would be close to 1000 hp, making the transfer of torque to all four wheels essential to frame everything, an approach that Lamborghini has long employed to make its supercars more stable and accessible.

Regarding the electric version, the information is much less detailed. We know that it will use the Ultium electric architecture as well as a newly developed thermal management system that can increase the range of electric vehicles by 10%, according to GM. Joe Biden had said in August 2020 that an electric Corvette capable of reaching 322 km/h (200 mph) was in the works, which implies an obviously high level of performance. All-wheel drive should also be part of its arsenal, like many high-performance electric models.