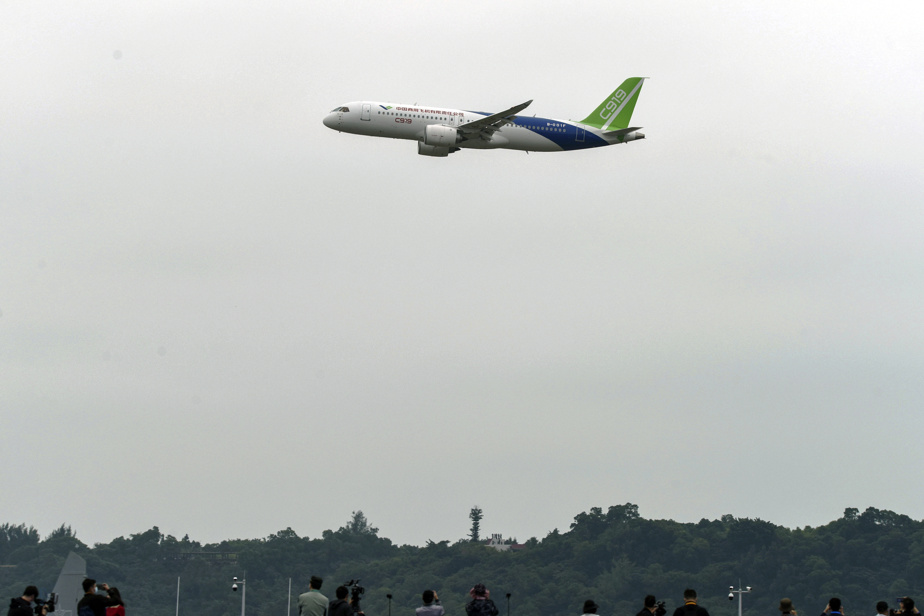 (Beijing) China announced on Friday that it had made the first delivery of its new airliner, the C919, a competitor to the Airbus A320 and which should make its inaugural commercial flight in early 2023.

The first medium-haul aircraft designed by China, even if most of its important parts come from abroad, the twin-engine aircraft from the state manufacturer Comac is also intended to compete with Boeing’s 737 MAX.

A first model of the C919, which can accommodate 164 passengers, was officially handed over to the Chinese company China Eastern during a ceremony organized at an airport in Shanghai, said state television CCTV.

This event marks “an important milestone” for the Chinese aeronautical industry, estimated the chain.

Footage released by CCTV on Friday shows the plane bearing the China Eastern logo on a rain-swept airfield and provides a glimpse inside the plane’s cabin.

At an air show in November, Comac said it had received orders for 300 of the C919. The manufacturer, however, did not give details on the amount of the contracts or the delivery dates.

According to Chinese media, four planes are to be delivered by the end of 2022 to China Eastern, the second national carrier in terms of number of passengers, before an entry into service scheduled for the first quarter of next year.

The development of the C919 did not prevent China from concluding a 17 billion dollar contract with Airbus at the start of the year.

The European aircraft manufacturer also began production of the A321 in November on its local production line in Tianjin, near Beijing (north).

The Boeing 737 MAX has been grounded in China since 2019 after two fatal air crashes.

The American manufacturer was pessimistic at the end of October as to the resumption of deliveries of this device, considering that the geopolitical situation did not allow to envisage an improvement of the situation in the immediate future.

Ongoing trade tensions between the United States and China have reportedly slowed progress on this file.