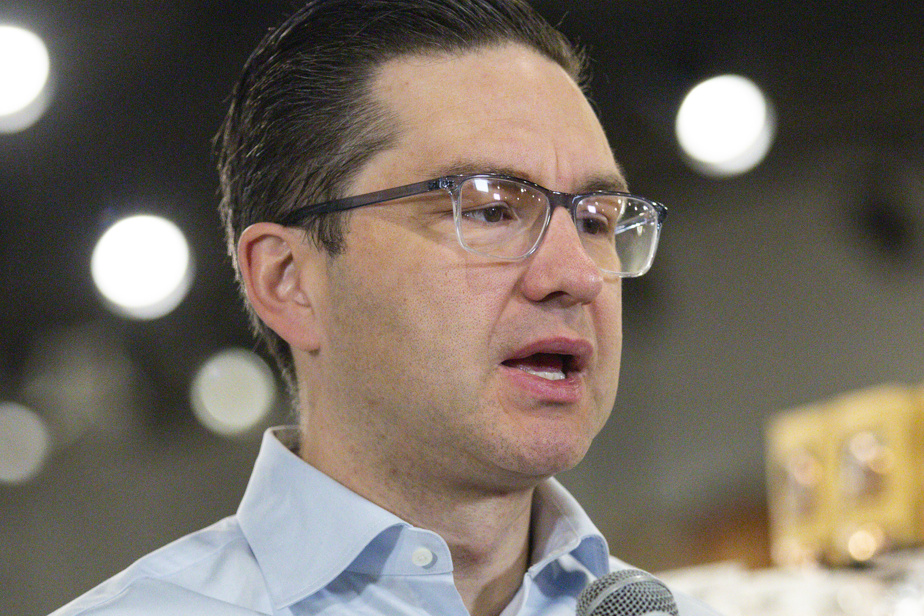 (Montreal) Pierre Poilievre has still not lent himself to the exercise of answering questions from journalists from the Canadian Parliamentary Press Gallery since his accession to the head of the Conservative Party of Canada and if we are to believe the tone of his explanations given at a press conference on Wednesday morning, he does not seem in a hurry to do so.

The leader of the official opposition held a press conference in a Vancouver grocery store on Wednesday morning to illustrate the consequences of inflation on food prices and on the food insecurity of Canadians. He then answered a few questions from journalists for the rare time since his election as leader on September 10.

In two months, aside from Wednesday’s press conference, Poilievre says he’s made one availability to Toronto media and one to Vancouver media, but his office hasn’t responded to our inquiries about when. it took place. The Canadian Press has tracked a video on YouTube of a so-called press conference with Punjabi media in Toronto, but it again only contains a monologue from the leader. It has not been possible to confirm whether this is indeed the meeting Mr. Poilievre was referring to.

The CCP leader still granted interviews to a few media, including The Pressthe National Post and the Montreal Journalbut in 60 days as Conservative leader, he has still not deigned to meet the journalists assigned daily to the activities of Parliament Hill in Ottawa.

To be specific, Mr. Poilievre did announce a press conference on September 13, a few days after his appointment, but reporters were prohibited from asking questions. The correspondent of Globe and Mail, David Akin, then took it upon himself to interrupt the opposition leader’s monologue by asking him his questions loud and clear. This intervention forced Pierre Poilievre to grant two questions to the journalists present.

In sixty days as leader of the official opposition in Ottawa, the Conservative leader has therefore answered two questions in Ottawa.

On Wednesday, the parliamentary correspondent for Radio-Canada, Christian Noël, questioned the Conservative leader to find out why he refused to answer questions from journalists.

This initiative seems to have piqued Pierre Poilievre, who initially took aim, accusing the journalist of being in error since he had met the media in Toronto and Vancouver in addition to sitting down with a representative of the National Post. He claimed to have taken 40 minutes of questions.

“I am here, I receive questions, there are journalists all over the country, it is not just parliamentary journalists who will control the agenda,” he then added.

He defended himself from running away from journalists by pleading that the reporters on the Hill were not the only representatives of the media in the country.

At the very end of the press conference, the journalist from Globe and Mail Mike Hager followed up on Mr. Poilievre in English since he had not directly answered the question as to why he refused to address journalists from the parliamentary gallery as all the other party leaders do.

“We are going to take questions”, first conceded the conservative leader before returning to the charge by accusing the political correspondents of seeking to manipulate the debate.

The Canadian Press has several journalists who are members of the Canadian Parliamentary Press Gallery.

Freedom of the press

For the professor at the School of Media at the University of Quebec in Montreal (UQAM), Patrick White, “it’s a not very brilliant way of trying to circumvent the press gallery”. He reminds us that political journalists in Ottawa are here to stay and that he will still have to rub shoulders with them if he is to become prime minister one day.

Himself a former political correspondent on the side of the National Assembly in Quebec, Mr. White adds that we should not underestimate the role of journalists in the gallery who are “the watchdogs of democracy”.

Journalists are there as a fourth power, it’s not for nothing, it’s to get answers to legitimate questions, it’s not the whims of journalists. It is the citizens who will suffer by having access to fewer texts on the reactions of Mr. Poilievre, apart from the official reactions.

Patrick White, professor at the School of Media at the University of Quebec in Montreal

Moreover, this media expert does not really understand the strategy of the Leader of the Opposition, while the elected officials on the other side of the chamber usually seek to obtain as much visibility as possible to overshadow the government. He believes this practice will have a “boomerang effect” that will backfire on the Conservatives.

Trying to explain his position, Pierre Poilievre said Wednesday that politicians would be “too obsessed with Parliament Hill” and that they would do well to “go see the real world to talk with real people on the ground.”

“People who live their daily lives with the consequences of the terrible policies of Justin Trudeau, who fail to pay their bills, who see crime explode in the streets, who do not have access to medicine for their children at their pharmacist while there are some south of the border, ”argued Mr. Poilievre.

He says he wants to tell these stories and tackle these issues. It is not clear, however, how the failure to answer journalists’ questions has any connection with these objectives.

Patrick White thinks rather that “he is completely misguided” by fleeing the media from the podium.

He said that to work in the parliamentary gallery, journalists must go through a rigorous accreditation process and hold professional journalist cards. These places are therefore reserved for established media whose practices respect a code of ethics for journalism.