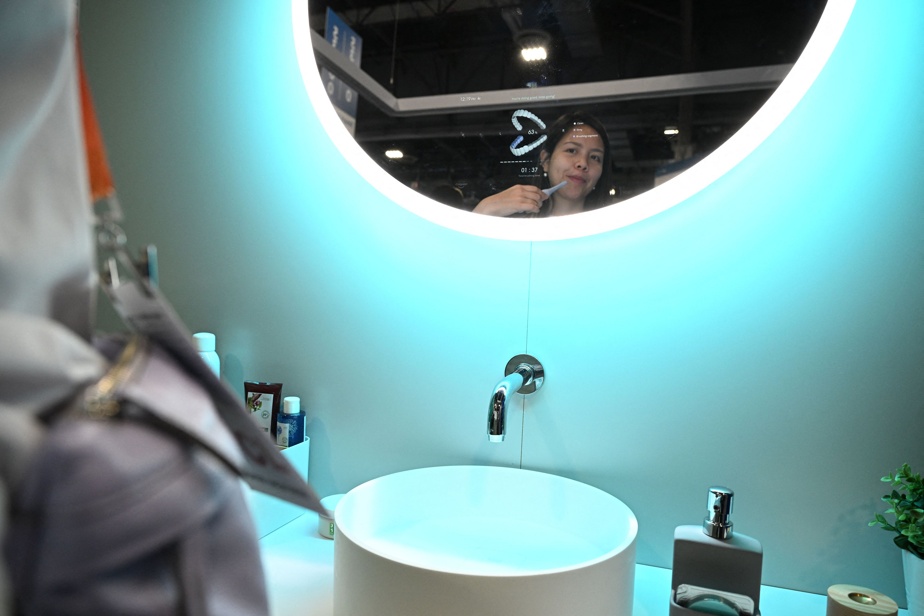 (Las Vegas) The television that warns when the dryer has finished running, the mirror that heats up the water in the shower and starts the coffee maker: at CES, the Las Vegas technology fair, the so-called “intelligent” home takes form, but still remains largely disconnected from reality.

The French company Baracoda has been transforming the bathroom for years with discreet health tools, integrated into everyday objects.

BMirror, its new connected mirror prototype, can collect information and exchange with the scale, the toilet or the toothbrush to make recommendations to members of the household – such as drinking more water or consulting a dermatologist because a mole has changed color.

“We immediately see if we have brushed our teeth well or if we have to put on sunscreen, for example”, describes Baptiste Quiniou, product director of the company interviewed at CES which is held from January 5 to 8.

But for optimal operation, it is necessary to use compatible devices, either developed by Baracoda, or by partner brands.

For start-ups and multinationals that have been designing and marketing connected objects for years, interoperability has become crucial.

“These devices can do incredibly useful things, but if they don’t communicate with each other, information is lost,” notes independent analyst Avi Greengart.

Amazon, Samsung, Apple, Google: the tech giants have each built their own ecosystem of devices, often around a voice assistant, such as Alexa or Siri.

“They hoped to attract enough people into their orbit and grow at the expense of others. But in the end, they all stagnated, ”underlines the expert.

The large groups ended up agreeing and this fall after three years of work, they created a connectivity protocol called “Matter”.

“We can consider it as the USB port of the connected home”, summarizes Mark Benson, the director in the United States of Smart Things, the connectivity subsidiary of Samsung.

“Before, when you bought a webcam you had to check that you could plug it into your computer. Now you no longer ask yourself the question, ”he explains.

Matter simplifies the digital installation of different equipment: it is no longer necessary to download a different application for each of them.

But ecosystems do not disappear.

“Technically, interoperability is not complicated. The problem is the data. Companies, by their nature, do not want to share,” says Jeff Wang.

Each brand therefore tries to convince the public to adopt its mobile application (Smart Things, Google Home, etc.) to centralize the control of household appliances.

In the vision of the South Korean group presented at CES, the consumer has a television, an oven, a washing machine and a refrigerator manufactured by Samsung.

Via his Smart Things app, he monitors his electricity consumption or the cooking of the chicken, while watching a film on television which also signals the end of his laundry.

At the Google booth, just say “Get to work!” » for the shade to lower and the essential oil diffuser to turn on.

For now, consumers have mainly adopted inexpensive connected speakers, and use them as a timer or to listen to music.

“More than half of American households have a connected device,” said Mark Benson. “And more than half of them have made their first such acquisition in the past three years.”

The CTA association, which organizes the CES, believes that the Matter standard will grow the connected home market, when the real estate sector will recover.

These technologies “are going to have a difficult year in the United States because of the decline in home sales,” a spokesperson told AFP.

The CTA nevertheless expects nearly 5 million connected thermostats sold in 2023, +15% over one year, as consumers are attracted by the prospect of saving energy.

The American company Savant has designed a connected fuse box to address this concern.

“It may be one of the last things in the house that we hadn’t yet thought of making ‘smart’,” notes Ian Roberts, a vice-president of the group.