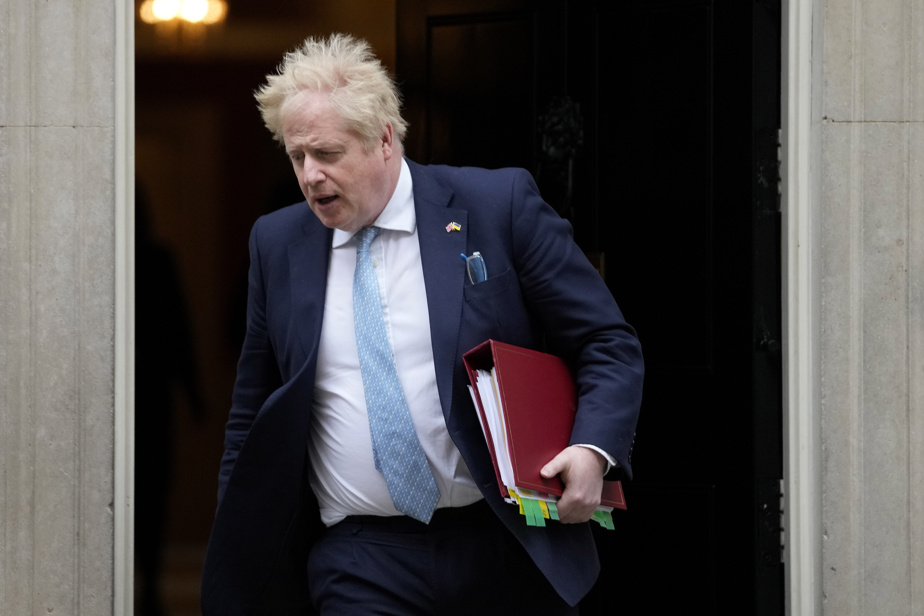 (London) An apology, but no resignation: Boris Johnson showed his determination on Tuesday to stay in power after being fined for a birthday party in breach of anti-COVID-19 rules, an unprecedented sanction for a first British minister in office.

A time on an ejection seat in January due to this crisis known as “partygate”, the conservative leader now seems protected by the war in Ukraine which cools the ardor among his majority of those who, there is little , said they were ready to dislodge him.

The punishment, announced by Downing Street on Tuesday, is nevertheless a severe setback for Boris Johnson, who not only broke the law, but also took the risk of ensuring that he had done nothing illegal in Parliament during the farewell parties. , aperitifs in the sun and other parties organized during confinement and revealed in recent months by the press.

He declared on television that he had paid this fine and presented a “full apology” for this surprise birthday which, according to him, lasted “less than 10 minutes” on June 19, 2020 in the cabinet room, for his 56 years old.

“I must say frankly that it did not seem to me at the time that it could break the rules,” he pleaded.

If he assured “understand the anger”, he swept aside the calls for the resignation, launched in particular by the leader of the Labor Party Keir Starmer and the first Scottish independence minister Nicola Sturgeon.

“I now want to continue and fulfill the mandate that is mine,” he explained, citing the economy and the war in Ukraine.

On Twitter, several ministers reaffirmed their support for him, including the head of diplomacy Liz Truss, the minister of Justice Dominic Raab and that of Health Sajid Javid.

Finance Minister Rishi Sunak and his wife Carrie Johnson were also fined for breaches of parties in power circles in 2020 and 2021. At the time, Britons were told to drastically reduce their social interactions to combat the spread of COVID-19.

Carrie Johnson, sanctioned for the same event as her husband, “unreservedly apologizes”, even if she thought she was “acting within the rules”, indicated her spokesperson.

Aware of the popular anger, several Conservative MPs had openly spoken out a few months ago for the departure of Boris Johnson, but the rebels were not numerous enough to trigger a vote of no confidence.

Today, Boris Johnson benefits from a favorable context, the international crisis around Ukraine dissuading the parliamentarians of his conservative camp from trying to oust him.

Conservative MP Roger Gale said he was “not ready to give Vladimir Putin the satisfaction of thinking that we are about to overthrow the Prime Minister of the United Kingdom and destabilize the coalition against Putin”.

The leader of the Scottish Conservative Party, Douglas Ross, who had once called for the resignation of Boris Johnson, also finally opposed this departure which “would destabilize the United Kingdom when we must be united in the face of Russian aggression” .

The parliamentary recess saves Boris Johnson from annoying questions from the opposition – at least until the debates resume on Tuesday.

Finally, Rishi Sunak, who was tipped as a possible successor to Boris Johnson, is himself sanctioned and weakened by revelations about his tax situation and that of his wife.

But the Prime Minister is weakened and has seen his popularity erode, he who triumphantly came to power in July 2019.

A majority of Britons (57%) believe he should resign, according to a YouGov poll of 2,464 Britons after the fine was announced.

An internal pre-report had already pinpointed “errors of leadership and judgment” in this case, pointing to unjustified gatherings and the consumption of alcohol at work.

In total, the police issued more than 50 fines for violations of anti-COVID-19 rules in this case, without specifying the names of the recipients.

For the association of families bereaved by the COVID-19 pandemic Bereaved Families for Justice, there is “simply no possibility that the Prime Minister or the Chancellor can continue”.