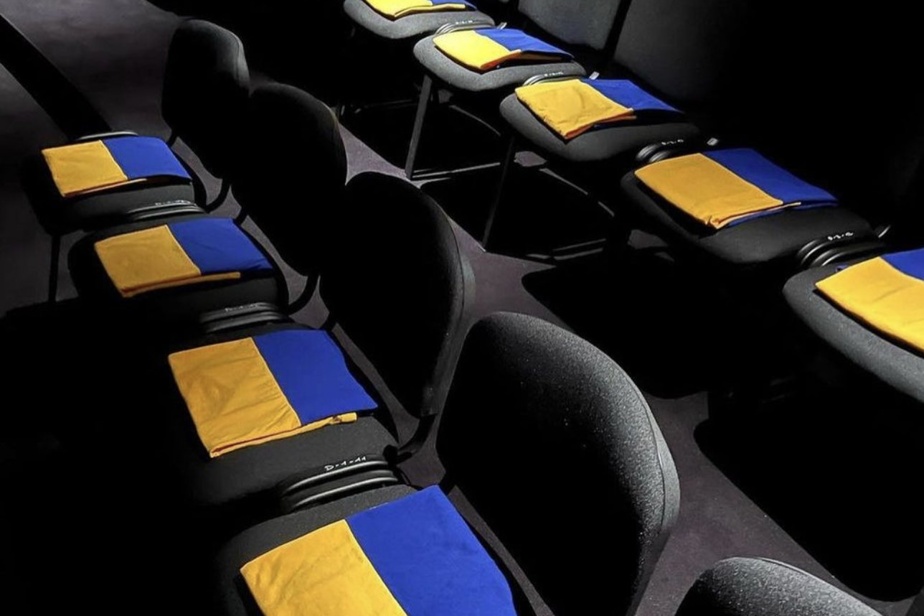 (Le Bourget) “Long live Ukraine, for beauty”: Demna, the Georgian designer of Balenciaga and himself a refugee from a war with Russia, paid a vibrant tribute to Ukraine on Sunday during the Week of Fashion in Paris.

Blue and yellow T-shirts hung on each seat with a parade note signed by Demna, explaining why he had held the event in these times when “fashion loses its right to exist” and “Fashion week seems absurd “.

“Long live Ukraine, for beauty, strength, truth, freedom”: in Ukrainian, Demna, 40, recited a poem by poet Oleksandr Oles dating from 1917, at the start and end of his parade in the Bourget, near Paris.

“It was the first time in my life when I felt good reading a poem. Fashion doesn’t matter to me right now,” he told the press backstage, to the sound of a popular Ukrainian song. I won’t surrender without a fight.

The female and male models, separated from the public by the transparent walls of a pavilion at the Le Bourget exhibition center, marched in a circle under the snowflakes and braving the wind. On thick snow, they walked at a jerky pace, placing their feet firmly so as not to slip.

On the other side of the wall, it was very cold while waiting for the parade which started – as so often in fashion – late. Spectators then put on Ukrainian T-shirts.

Black outfits and handbags reminiscent of trash bags opened the parade. Some men were half-naked, wearing boxers and trainers, their legs uncovered, extremely vulnerable in the snow.

“It’s deliberate. I saw myself walking and hiding in shelters 30 years ago, like those 10-year-old Ukrainian girls and boys with their parents who don’t know what will befall them,” he said.

Demna Gvasalia, who recently dropped her surname for her portrayals in fashion, was born in Sukhumi, Abkhazia, a region of Georgia, then a Soviet republic. In the 1990s, after the fall of the USSR, he fled with his family from the “ethnic cleansing” of Georgia by pro-Russian Abkhazian separatists backed by Moscow.

During his journey, the family had made a stopover in Ukraine.

“The war in Ukraine reawakened the pain and trauma I had in me since 1993, when the same thing happened in my homeland and I became a refugee forever,” Demna wrote.

“Lucky to work in peace”

“I thought at times about canceling the show that me and my teams worked hard for […] But I realized that to cancel the parade would be to surrender, to resign myself to the evil that has already hurt me so much for almost 30 years”.

A man in a total yellow look and a woman in an airy blue dress and train closed the parade.

In the fashion world, which usually talks about context in watered-down terms, Demna was the first to denounce “Russian aggression against Ukraine” and put the Ukrainian flag on Instagram.

He made a donation to the WFP (UN World Food Programme) to support the first humanitarian aid to Ukrainian refugees.

“We must never forget how lucky you are to live and practice our profession in peace. Let’s help those who can’t, ”added the Givenchy house later in the evening.

For its parade, the Défense Arena room in Nanterre, near Paris, had donned the blue and yellow colors of the Ukrainian flag. A poster invited spectators to follow the example of the luxury brand by making donations to the Ukrainian Red Cross.

All worn with tight thigh-high boots.