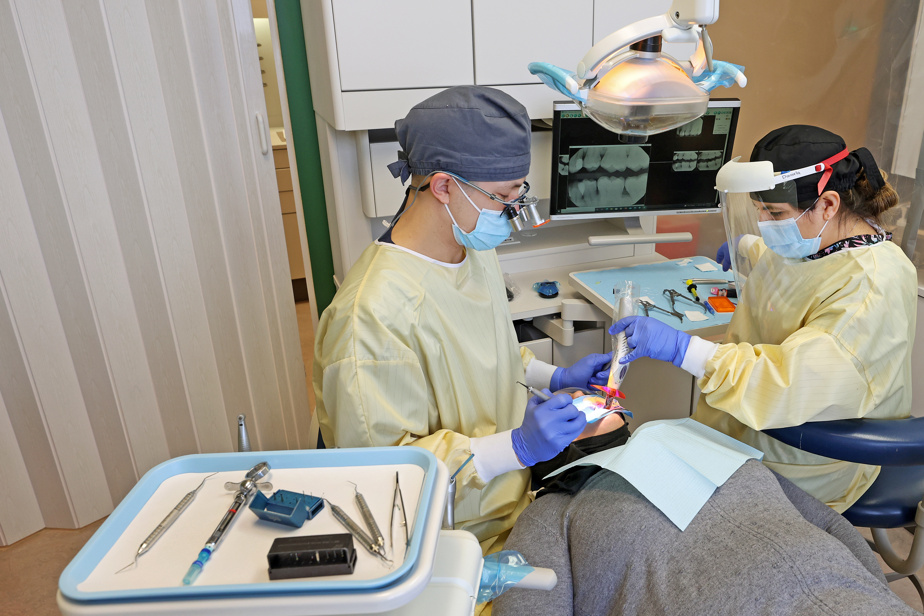 Already struggling to pay for their groceries, many Quebecers cannot afford to go to the dentist. They are reduced to asking for charity on the internet or to the dentists themselves, who are called upon by their Order to perform certain free treatments. Aware of the problem, the government is opening the door to better access to dental care for the most disadvantaged.

A call from a young man to the hospital was taken seriously. An ambulance was sent to his home, police, too. Arrived at the emergency room in tears, the patient said he was suffering from an intolerable toothache. “The dentist charged me $600, but he didn’t even take my teeth out. »

Even though he had an appointment several weeks later, he had no more money to pay for the rest of the treatments.

The scene of the show On call 24/7 struck the imagination, with doctors asking onscreen why dental care wasn’t covered and noting that in this case it would have cost the system less than the ambulance, the police and the visit to emergencies.

On the Internet, people occasionally solicit donations for their dental care. “After several surgeries and with great embarrassment, writes a young woman, I am now asking for your help to support me. »

Another made her request on GoFundMe, a site where you can also request money from the public. Before her open-heart surgery, she absolutely had to receive dental treatment, which she estimated at $1,600. A few weeks later, photograph of her long scar in support, she thanked the donors. Thanks to them, his heart valve had been replaced.

If we must always be careful of fraudsters, it is true that certain operations must be postponed by mouths in too bad a state. “When you have to do surgery related to a valve, there is a risk that a bacterium attaches itself to it and that it causes an infection [une endocardite] which can be quite serious,” says Dr.r Philippe Demers, cardiac surgeon at the Montreal Heart Institute. “Before such an operation, we therefore always ask the patient if he has had a dental examination in the last year. If the teeth are in poor condition, they must first be taken care of. »

When there is an emergency, sometimes surgeons go ahead despite the risk. In other cases, the operation is delayed.

Some patients are at a dead end. They have no insurance, not enough money to go to the dentist, there are hardly any dentists in the hospitals, and the dental care reimbursed by the RAMQ is limited.

Children under 10, CHSLD residents and social assistance recipients (who, in many cases, only have access to tooth extractions) are entitled to certain treatments free of charge. This leaves a large part of the population in limbo.

Dentists are at the forefront of this misery. The government acts “as if the mouth is not part of the body”, denounces the Dr Christian Caron, professor at Laval University and head of the dental service at the CHU de Québec.

His specialty is the elderly. Those who only have the Old Age Security pension and a guaranteed supplement live on less than $19,000 a year. Dental care? Unthinkable for many who are aging, as for so many other groups in the population.

Immigrants who arrive here are often in survival mode. They make sure they have food to put on the table first. At best, they will manage to have their children’s teeth treated, but not their own.

The Dr Christian Caron, professor at Laval University and head of the dental service at the CHU de Québec

And that’s not counting all those who, retired or unemployed, no longer have insurance, underlines the Dr Because we.

The Welcome Hall Mission manages to get 1,500 free treatments per year. “The vast majority of these patients – who are not homeless – have not seen a dentist for at least five years,” says Sam Watts, the organization’s chief executive.

Only basic treatments are offered (no root canal treatment, for example), and the waiting list is five months. The Welcome Hall Mission hopes to be able to double the number of patients it helps, with the support of professionals and interns from McGill University.

Emergency measures that are no longer enough

Without publicizing it too much, dentists provide treatment for free or at very low cost, often through Project Bouche B, of the Foundation of the Order of Dentists of Quebec, which centralizes and analyzes requests. Through this program, 180 to 220 patients are treated annually on average, for care whose value is estimated between $250,000 and $300,000 (and only when they are referred by organizations).

The merit of this initiative goes to the dentists of the Maxillo-Mauricie clinic in Trois-Rivières, who, in the 2010s, convinced dentists, denturists and orthodontists in the region to help disadvantaged patients. “For four years, I devoted half my working hours to it,” says the DD France de Montigny, director of the clinic.

The project was submitted to the Order of Dentists of Quebec, which extended it to all of Quebec.

We ask our dentists to do one emergency treatment a year, but we can hardly ask for more: dentists often have long waiting lists, and we are at the limit of what we can do.

Sylvie Forrest, President of the Foundation of the Order of Dentists of Quebec

These few free or very low-cost treatments, the payment spreads, the rare clinics that offer low prices (including university clinics) are far from meeting the demand, also indicates the Dr Guy Lafrance, president of the Order of Dentists of Quebec, who notes that the government is increasingly aware of this.

Evidenced by the creation, last fall, by the Quebec government of five clinics with a starting budget of 3 million for the first year. The goal of these clinics, said Christian Dubé, Minister of Health and Social Services last November, is “to provide better access [aux soins dentaires], with a concern for fairness and solidarity for all. Dental health contributes to the overall health status of our citizens”.

These five clinics, located in Gaspésie, Outaouais, Montreal and Val-des-Sources, represent only a first step, underlines the Dr Lafrance, who points out that several regions remain exposed.

The first five clinics aim to provide care for 22,000 people. The Minister of Health says that a second phase could be considered, “depending on the results observed in the context of these pilot projects”.

If this is the case, the government estimates that it can help 600,000 people living in remote regions or below the low-income threshold.