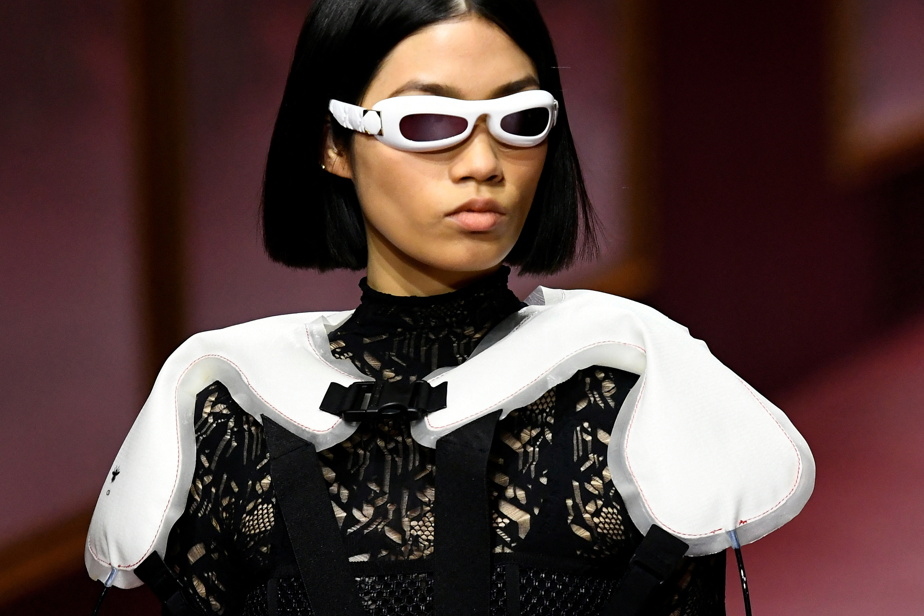 As Russian missiles descend on Ukrainian cities, the collection, designed in recent months and meant to push the boundaries of luxury “sportswear”, lends itself to a different reading.

“There is a lot of thinking about how, in these difficult times, to combine beauty, aesthetics and protection,” said Maria Grazia Chiuri, artistic director of Dior’s women’s collections, to AFP.

“Clothing in itself represents an idea of ​​protection, it’s our first home, it reassures us. This aspect is very present in what I do, from emotional protection to protection in the truest sense of the word,” she adds.

The war in Ukraine “is much closer to us. But the world was already at war, COVID-19 was another war in a way, we had extremely difficult months”.

The context pushes “fashion to confront technology to make it more functional for women, for the body”, underlines the designer.

Entering the parade called “Next era” in the Jardin des Tuileries, we pass by the eponymous work of the Italian artist Mariella Bettineschi, who repaints female portraits from the 16th to the 19th centuries by cutting out and splitting the eyes of women.

Leonardo da Vinci’s Lady with an Ermine with four eyes thus welcomes guests at the entrance to the pavilion, symbolizing a feminist reinterpretation of the history of art and the new look that changes the perception of things.

Familiar female faces, taken from large paintings but with double eyes, observe the parade from the burgundy walls covered with these portraits.

Known for her feminist positions, Maria Grazia Chiuri sees in it an anti-war message.

“The problem is cultural and patriarchal. We need more women in decision-making positions […] There would be fewer wars, women don’t want wars”, she underlines.

In terms of design, it was the bar jacket, the ultra-feminine key piece of Christian Dior’s post-war New Look, that Maria Grazia Chiuri transformed in the most radical way.

Padded at the hips or heated with circuits that can transmit heat and light, the jacket with voluptuous and hypersexualized shapes becomes a futuristic functional piece.

“I wanted to break it down and recompose it with another lexicon,” explains the designer.

The collection is made in collaboration with Italian start-up company D-Air lab which makes equipment for motorcyclists.

A bar jacket reinvents the original model with a mesh reminiscent of greyness, able to take the imprint of the body, another has a sophisticated heating system at the back for working in extreme weather conditions or conquering the Himalayas…

The square-toed embroidered pumps made in collaboration with Roger Vivier are enhanced by a technical fabric yoke around the ankle, evoking protective strips.

Thick black military-style boots are a go-to piece for the Dior woman of the coming era.