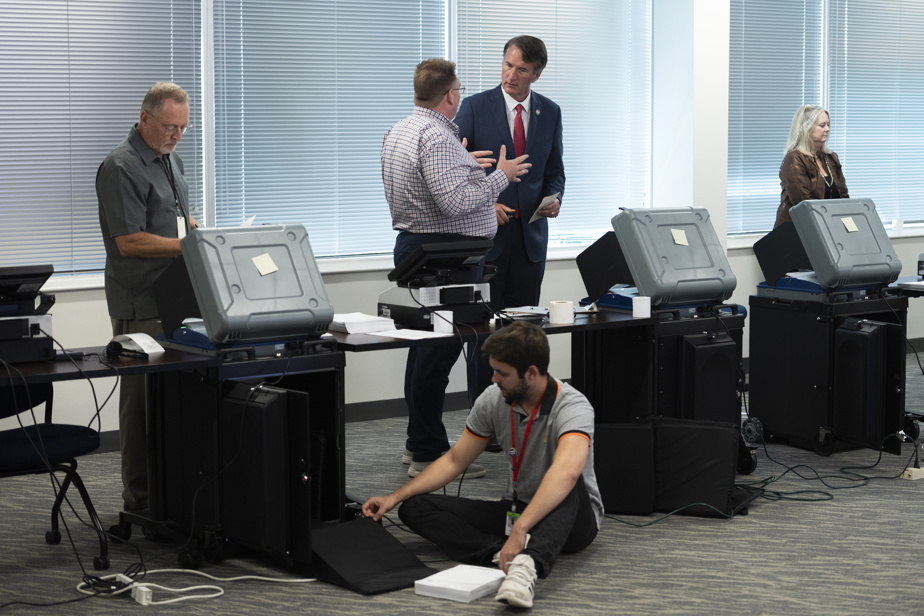 (Leesburg) Many leave due to burnout, others worry for their safety: Poll workers are increasingly subject to harassment in the United States, the result of conspiracy theories born out of the election of 2020.

And just days before the midterm elections on November 8, these tenacious and unfounded theories are fueling fears of violence.

“The only problems we had were dealing with misinformation,” said Richard Keech, an official from Loudoun County, Virginia.

At the end of October, voters follow one another in a place dedicated to advance voting. One of them asks if the voting machines are connected to the internet, a myth already largely denied.

Since August, the county has had to respond to 220 requests for information about voting materials and voter lists, a record. And a misleading video claimed authorities in Loudoun kept photos of the ballots.

“Within 24 hours, voters arrived at the reception insisting on seeing the photo of their ballot to ensure that their vote had been correctly counted”, says Richard Keech, who has worked for more than ten years around the elections.

“This is how misinformation affects voters. »

In Arizona, individuals inspired by a hit conspiratorial film about the 2020 election have taken to monitoring the boxes where voters can drop off their ballots early. In other key states, the Republican Party recruited poll workers from groups relaying unfounded accusations of fraud in 2020.

Local officials claim that these maneuvers complicate their work and say they are worried about their safety.

“We are concerned about what is happening in other counties” in Pennsylvania, says Dori Sawyer, an electoral official for Montgomery County, in this East Coast state. “We wonder when our turn will come. »

The director of the federal cybersecurity agency, Jen Easterly, said in October that she was “not aware of any specific or credible threats that could compromise or disrupt the electoral infrastructure”.

“That said, the threats against this election are more varied than they have ever been,” she nuanced, citing possible “harassment against electoral officials” and “internal threats”.

After Donald Trump’s defeat in 2020, local officials were the target of much unwarranted criticism, to the point that some had to take shelter.

The Justice Department has promised to crack down on such threats amid the midterm elections, but experts say they have already taken their toll.

“It heightened the tensions around the election in a way that I had never encountered before,” said Tammy Patrick, of the Democracy Fund NGO and former Arizona election official.

“We have seen states where a quarter or even a third of election workers have quit. »

According to Richard Keech, one-third of Loudoun County’s polling station staff have been hired this year. Other states have not replaced those who resigned after 2020, including the top election official in Fulton County, where Atlanta is located.

This relative inexperience could lead to errors that could then be presented as willful misdeeds, experts warn. Not to mention the risk of hiring people who deny the validity of the result of the 2020 presidential election.

“As soon as you hire a lot of short contracts as an election cycle approaches, you automatically increase the possibility of internal risk,” warns David Levine, researcher at the Alliance for Securing Democracy.

Faced with these tensions, the procedures have sometimes been modified.

“We have again reinforced the security of our building”, assures Richard Keech. Loudoun County has also “further consolidated” its ballot tracking methods.

In Montgomery County, Dori Sawyer says she attended security meetings with law enforcement, including the FBI, as a precaution.

When voters call to express their concerns, she reminds them that her teams are made up of “real people.”

Explaining how important democracy is to her, she says: “We have the opportunity to write our own destiny. I think it’s worth protecting. »