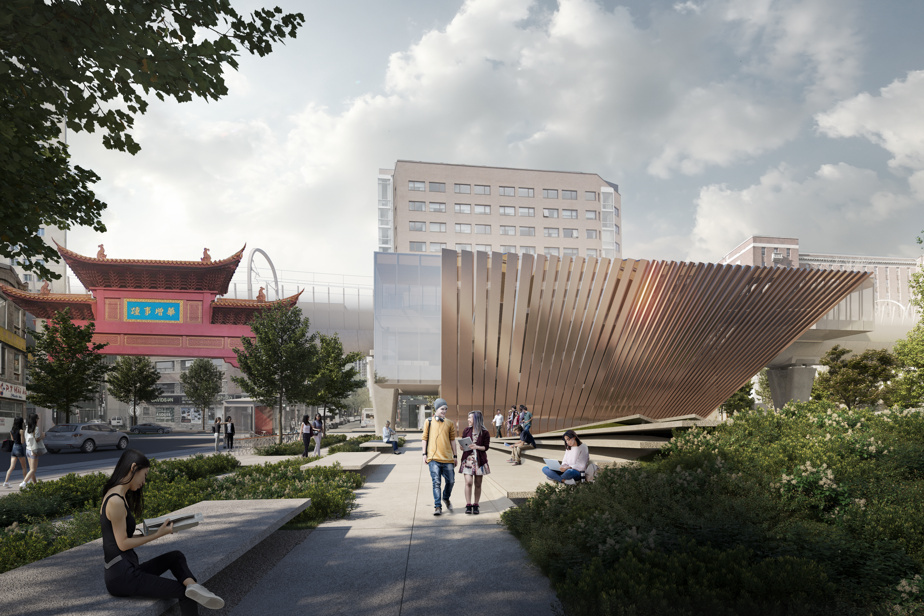 Montreal Mayor Valérie Plante says everything will be done to protect Chinatown, “whatever happens with the REM,” as voices raise concerns about the future of this iconic downtown area. .

“At the City of Montreal and with the Government of Quebec, we have embarked on the protection of the heritage and the soul of Chinatown. So whatever happens with the REM, we have to make sure that what we are working for, and what needs to be done to protect this area, is done, ”hammered in English Mme Plante, Monday morning, on the sidelines of a press conference.

Towards the end of last January, Quebec and Montreal had indeed confirmed their desire to “protect the unique character” of the heart of Chinatown. Notices of intent have been filed by the Minister of Culture, Nathalie Roy, essentially targeting the “institutional core” of Chinatown, in the quadrilateral formed by Jeanne-Mance, Saint-Urbain, De La Gauchetière and Avenue Viger West. The iconic arch at the entrance to the neighborhood will also be protected, as will the British and Canadian School building and the site of the former S. Davis and Sons factory.

“With the huge building they are planning near the Ark, it won’t even be noticeable from the east, west or north. It is, however, a symbolic element marking the entrance to the district,” lamented Mr. Cha in an interview with The Press on this subject.

According to CDPQ Infra’s new plans, which were unveiled to the public last week, the Saint-Urbain station of the future REM de l’Est would be built at the gates of Chinatown, on an abandoned parking lot. The aerial structure, which would pass over the site, has been criticized for several months already by several organizations.

Chinatown has already been surrounded by the Ville-Marie highway and the widening of Dorchester Boulevard, which has become René-Lévesque. Then there, we would come even more to create a fracture, a limit, a barrier.

Mr. Cha also fears that the exit from the tunnel that will be built on René-Lévesque, according to CDPQ Infra, will cause the connection between the Quartier des spectacles and Chinatown to disappear. “It could lead to a significant reduction in traffic and, therefore, in the attendance of a certain number of businesses. And for the residents, it also means imposing a structure on their face,” the spokesperson further castigated.

He argues that a “more underground” version, with “at least one additional station underground”, would be more sensible. “As soon as we have an aerial structure here, the emblematic buildings will no longer have the same presence in the urban landscape. It will be harmful, ”insists Jonathan Cha.

Valérie Plante, who has been campaigning for more open discussions with the Caisse de dépôt for several months, affirms that the present situation illustrates once again “the importance of having the City of Montreal around the decision-making table” in the East REM project. She says she wants to “make sure that everyone is heard, that the population agrees”.

At her side, the Minister responsible for the Metropolis, Chantal Rouleau, also certified Monday that “discussions are currently taking place with the City, CDPQ Infra and the government” to ensure “the best possible governance” surrounding the project. “We are there,” she also assured, reiterating that Quebec would extend additional sums for the integration of the transport network, a priority for all parties, according to the elected official.

At CDPQ Infra, the spokesperson for the REM de l’Est, Virginie Cousineau, recalled Monday that her group remains “agree with the importance of ensuring the alignment of all stakeholders for the rest of the project “. “The REM de l’Est is an opportunity to rethink the territory and we are convinced that the arrival of a light rail station near Chinatown, as well as the proposed development vision, will help to revitalize the sector and ensure its influence. We will continue to exchange with all the players, ”she said.