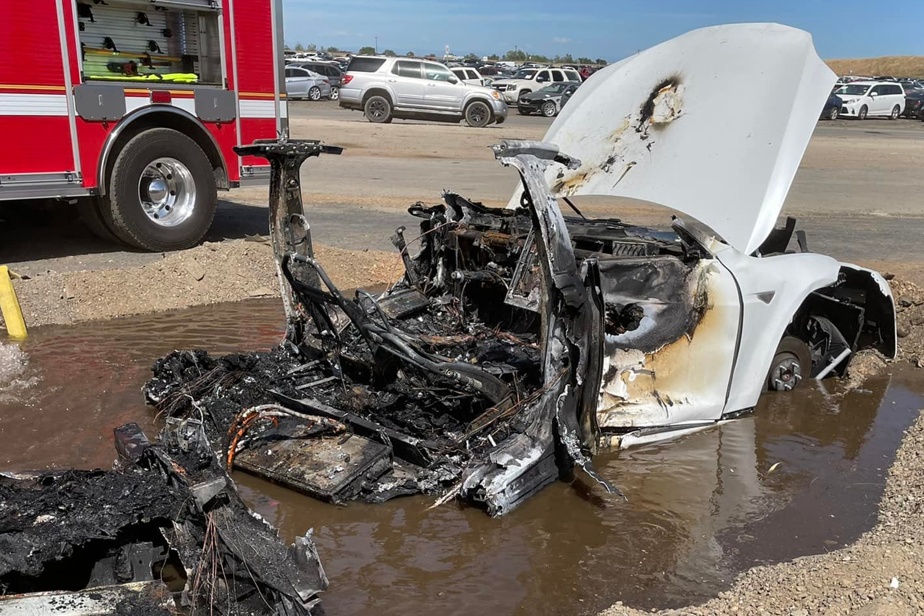 (New York) A car that caught fire more than three weeks after arriving at the scrapyard, 17,000 liters of water, the emergency construction of a mini-basin to immerse the electric batteries: the fire of a Tesla in early June caught firefighters in the Sacramento District by surprise.

Extinguished, the fire did not stop resuming. Even after flipping the car on its side and directing the water directly at the batteries.

“We did not expect to meet so many challenges” to control the flames, says Parker Wilbourn, captain of firefighters in the Californian agglomeration.

With more and more hybrids and electrics in circulation, “we are entering a new era of fires, we have to adapt and find solutions”, he believes.

Because “every second counts” during an incident, General Motors (GM) announced Thursday to extend its first aid training program to interventions on electric vehicles in the United States and Canada. The group currently markets four models in this category and aims to offer 30 by 2025.

The aim is to provide technical information on batteries, to share best practices and to “dispel preconceived ideas”, explains a press release: think for example of cutting the engine since that of electric vehicles does not make noise, or fight against the idea that you shouldn’t put water on the batteries.

Electric and hybrid vehicles are still very much in the minority on American roads, but they accounted for nearly 10% of cars purchased in the United States last year according to Cox Automotive.

The US Highway Safety Agency (NHTSA) says it does not have enough data on car fires with electric batteries to draw conclusions.

But the latter are not a priori more frequent or dangerous than those of gasoline cars, assures the National Association of protection against fires (NFPA).

On the other hand, they require specific procedures, adds the organization which has been offering specific training since 2010.

It usually takes a lot more water, between 11,350 liters and 30,300 liters approximately according to a guide prepared by Tesla for the attention of first aid. Which is not necessarily easy in rural areas where there are no fire hydrants.

It is also common for batteries to catch fire again several hours or even days after the initial incident, due to a phenomenon known as “thermal runaway” which can occur in damaged lithium-ion batteries. Tesla recommends monitoring battery temperatures for at least 24 hours after a fire.

“Firefighters are used to the risks” associated with electricity, notes Michael Gorin of the NFPA. “But not in a car. »

Manufacturers are required to publish a first aid guide for each model they produce.

In a report published at the end of 2020, the American transport accident investigation agency (NTSB) recommended that manufacturers of vehicles equipped with lithium-ion batteries follow the same format, with specific information on how to extinguish and monitor a fire.

At the beginning of June, she pointed out that only eight manufacturers out of the 22 concerned had completely integrated her recommendations.

Firefighters arrive at accident scenes “and don’t know what to do,” notes Michael Brooks, legal director for the Center for Motor Vehicle Safety. “How to evacuate a passenger from a burning electric vehicle? How do you know how fire can spread? »

Like traditional cars, those equipped with batteries can also catch fire when stationary.

GM last summer advised owners of certain electric Chevrolet Bolts not to park them indoors or charge them unattended overnight, before initiating a mass recall of the model.

Faults on batteries manufactured by the South Korean group LG could, in certain circumstances, trigger fire outbreaks. GM eventually had to suspend production of the Bolt for several months.

The NHTSA initiated a specific procedure in April on LG batteries, involved in several recalls of the Volkswagen, Chrysler (Stellantis), Hyundai, GM and Mercedes brands.

All types of transport propelled by electric batteries are concerned: to avoid fires, the agency supervising social housing in New York has proposed to prohibit in apartments and common areas all electric bicycles or batteries of electric bicycles, at least same title as mopeds.