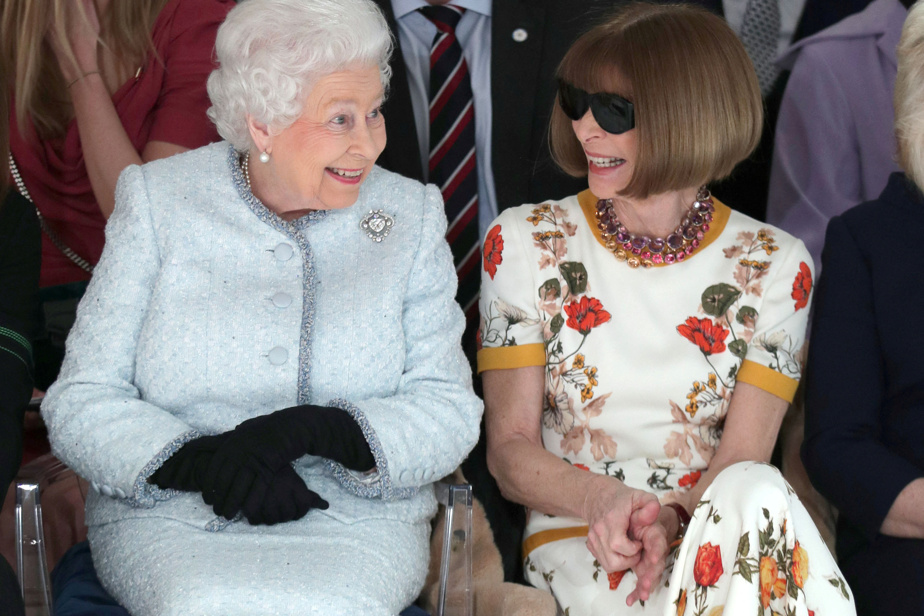 (London) Brightly colored outfits, a matching hat and a pair of immaculate gloves: Queen Elizabeth II’s look was instantly recognizable, reflecting the very personal fashion she had created for herself to embody her role.

During his seventy years of reign, His Majesty seems to have tested all the shades of the color chart, from chick yellow to fluorescent green via fuchsia or royal blue.

Whichever color she chose, she was always “flawless”, according to her grandson Harry.

An inimitable style that she has gradually forged, with the help of dressmakers and appointed advisers. The first, Norman Hartnell, had made one of his most emblematic outfits, his wedding dress. In ivory silk, embroidered with 10,000 pearls, and studded with crystals, it had dazzled the British just out of the Second World War.

Norman Hartnell also made the silk dress she wore at her coronation in 1953.

He said he was inspired “by the sky, the earth, the sun, the moon, the stars and anything else that could be embroidered on a dress that was meant to be historic.”

“Making clothes for the Queen is no easy task,” Hardy Amies, the Queen’s official designer from 1955 to 1990, once said, designer of the pink ensemble she wore during her Silver Jubilee in 1977.

It is a woman, Angela Kelly, who has ensured for more than two decades that the queen is always perfect. This Englishwoman from Liverpool of humble origins joined Elizabeth II’s dressing team in 1993 and became her personal stylist in 2002.

During the confinement, Mme Kelly cut the monarch’s hair herself, she said in a book authorized by Buckingham Palace.

If Her Majesty was a loyal client, advising her was no easy task. The ” dress code royal obeys specific rules, beware of missteps!

“There are no written rules, but there is ‘etiquette’ and protocol,” Grant Harrold, former royal family butler, told AFP. Impossible to see the monarch wearing black tights or red nail polish. She only went out in flesh-colored tights. As for the varnish, it had to be very pale pink, considered more elegant.

On the wardrobe side, “never a skirt above the knee”, notes Mr. Harrold. For jewelry, she gladly opted for a brooch or a pearl necklace, preferably with three rows.

If the queen perpetuated somewhat outdated traditions, rarely going out without a hat, some of her habits, such as wearing gloves in summer and winter, also had a “practical” side, underlines Grant Harrold: it was a question of “taking care not to not catch a germ or a cold” when she shook hands with her subjects.

But the main feature of his style was his choice of colors, intended to quickly spot the 1.63m monarch.

“The queen is well known for her brightly colored plain outfits which aim to ensure that she is easily recognizable on special occasions”, explained in 2016 Caroline de Guitaut, curator of an exhibition devoted to the outfits of Elizabeth II. .

On weekends in one of her country residences, the queen gladly left the hat in the cloakroom for a simple scarf, a kilt and a pair of boots. But during her official engagements, Her Majesty was a follower of ” color block » : the same color, from head to toe.

For Michele Clapton, costume designer of the series The Crown, it was like “a uniform, an armour”. “She can be in her garden with her corgis then the next moment appear in a suit, hat and gloves”, remarked the costume designer in an interview with vogue in 2016.

Her wardrobe was sometimes a means of conveying messages, for example by displaying an Irish shamrock or a Canadian maple leaf during an official visit, a subtle way of honoring her hosts.

Rumor has it that she used her inseparable Launer bag, of which she allegedly had more than 200 copies, to send secret signals to her team.

To work in the Queen’s service, discretion was obviously required, as Rigby & Peller, a manufacturer of high-end bras that lost its status as official supplier to Elizabeth II, learned the hard way. for revealing the underside of royal lingerie.

First ambassador of British fashion, Elizabeth II only attended her first London Fashion Week in 2018. On this occasion, she presented the first “Elizabeth II Fashion Prize”, a reward then awarded every year to a new talent in the sector.

Dressed in a light blue tweed ensemble, the queen eclipsed fashion superstar Anna Wintour, who sat beside her.