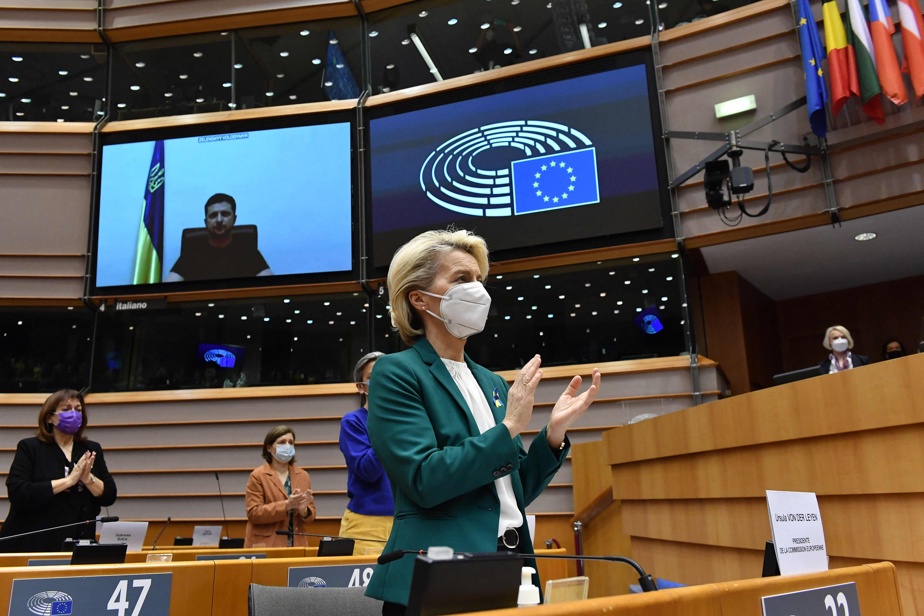 (Brussels) The Twenty-Seven approved on Tuesday new sanctions against Moscow for having invaded Ukraine, with the banning of broadcasting in the EU of the state media RT and Sputnik and the exclusion of “certain Russian banks” of Swift, a key cog in international finance.

The ambassadors of the Member States gathered in Brussels also gave the green light to the prohibition for Europeans to participate in projects co-financed by the Russian sovereign fund RDIF, specified in the same tweet the French presidency of the EU.

These measures will come into force after publication of the decisions in the Official Journal of the EU, which will specify the names of the banks concerned, chosen “in coordination with the international partners” of the Europeans. The broadcast ban for RT and Sputnik will take effect on Wednesday, according to a European source.

The Western allies had announced on Saturday that they wanted to exclude Russian banks from Swift, so as to further isolate Moscow from the international financial system.

The sanction is considered a financial “atomic weapon”: Swift, notably at the origin of the BIC system which makes it possible to identify a bank via a unique code, allows operations such as the transit of payment orders and funds transfer orders between banks. Some 300 Russian banks and institutions use it.

Several European countries were initially reluctant to face such a measure, in particular Germany and Italy, which feared being penalized in retaliation for their deliveries of Russian gas on which they are very dependent, but ended up rallying to it. .

Swift, a Belgian company, is only required to apply the sanctions adopted by the Europeans. In 2012, it excluded several Iranian banks from its system following an EU decision before most were reinstated in January 2016.

Moscow has however set up alternative financial infrastructures, for payments (“Mir” cards, which are intended to be the equivalent of Visa and Mastercard), rating (Akra agency) or transfers, via a system called SPFS.

On the sixth day of the invasion of Ukraine, the ambassadors also approved the banning of multimedia content from Sputnik and the English, German, French and Spanish versions of the Russia Today (RT) channel on television networks as well than on the internet on the Old Continent.

“We are going to ban the Kremlin media machine. RT and Sputnik, along with their affiliates, will no longer be able to spread their lies to justify Putin’s war and to sow division in our Union,” European Commission President Ursula von der Leyen said on Sunday.

These two companies “are not traditional media but tools of disinformation”, massively financed by the Kremlin, justified a European official, specifying that this prohibition will remain in place “until the end of the Russian aggression of the Ukrainian”.

This sanction is aimed at “a wide range of distribution channels” but not the journalists themselves, “the media professionals concerned being able to continue their activities” for broadcasts outside Europe, he insisted on specifying.

The president of RT France, Xenia Fedorova, reacted strongly to the Commission’s announcement on Sunday, denouncing “censorship” and an attack “on the very principles of freedom of expression”. RT France (176 employees, including 100 journalists) had indicated that it wanted to take legal action.

“We rely on solid legal foundations […] and we will defend our decision before the European courts”, assured a European source while admitting that reprisals against European media in Russia were “a possibility”.

Each Member State, via its media regulatory authority and its telecom operators, will be responsible for enforcing this ban and imposing, where appropriate, “proportionate and dissuasive” sanctions.

“This sanction is certainly a restriction on freedom of expression and enterprise, but a balance had to be found between these rights and the need to counter disinformation activities” which contribute to the Russian offensive against Ukraine, said claim another European official.