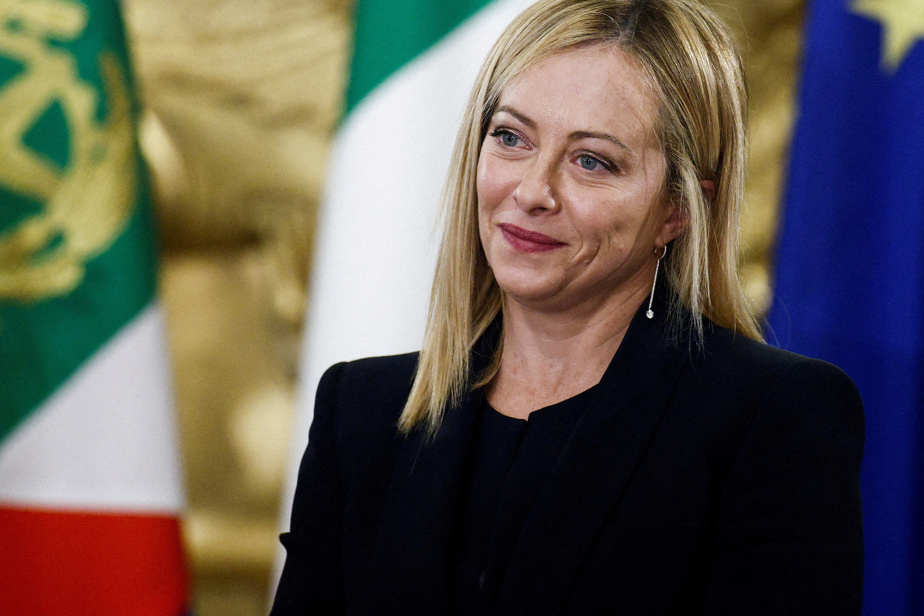 (Brussels) Far-right Italian Prime Minister Giorgia Meloni began her meetings in Brussels on Thursday with the leaders of the European Union after having multiplied since her election the rather soothing remarks vis-à-vis the bloc.

“I am very happy to have chosen Brussels for my first international trip, and in particular to be here, in the European Parliament”, declared the 45-year-old sovereignist leader, during her meeting with the president of the institution, Roberta Metsola.

“Italy has always played a central role in the EU,” the latter tweeted. “With Russia invading Ukraine, energy prices soaring and inflation on the rise, more than ever we need to stay united. We are stronger if we are together,” she added.

The first female head of government in Italy, at the head of the most right-wing government since the post-war period, then met Commission President Ursula von der Leyen, with whom she exchanged a brief handshake in front of the cameras.

The one who, in the campaign, has hammered home her desire to defend Italian interests above all, should meet at the start of the evening with the President of the European Council (institution representing the Member States) Charles Michel.

Sign of a form of caution on both sides, no joint declaration was planned at the end of these three meetings which are carefully scrutinized, against a background of energy crisis which is testing the resistance of the ‘Union.

“Italy’s voice in Europe will be strong: We are ready to face the big issues, starting with the energy crisis, working for a quick and effective solution to support families and businesses and put an end to the speculation, ”wrote the Italian leader on Twitter before this series of meetings which are her baptism of fire on the international scene.

His face-to-face with Mme von der Leyen was the first since the outcry caused in Italy by the remarks of the President of the Commission, who had warned before the elections in the peninsula of the consequences to which Italy would be exposed in the event of deviation from the principles democratic.

But according to political scientist Lorenzo Codogno, the Italian leader comes to Brussels without warlike intentions: “Meloni is pragmatic and wants to be seen as a moderate leader,” he told AFP.

The one who leads the third economy in the euro zone should emphasize the urgency of European measures to reduce energy prices, a fight already started by her predecessor Mario Draghi.

“Discussions will focus on energy […] the most pressing problem as winter approaches,” underlines Mr. Codogno, according to whom Mr.me Meloni will seek to demonstrate continuity with the Draghi government by demanding solutions “at EU level”.

The former head of the European Central Bank (ECB) had joined other countries in calling for solutions to the energy crisis to be found at European level rather than through the individualistic approach adopted by Berlin , much criticized by its partners.

European leaders hope for their part to seize the opportunity to “better understand Meloni’s intentions”, analysis for AFP Sébastien Maillard, director of the Jacques Delors Institute.

“Beyond the messages of appeasement” on Rome’s anchoring in the Western world and in NATO and its distancing from fascism, “it ultimately remained rather vague about what it wants to do”.

European leaders should also, during this first contact, be cautious to avoid pushing Mme Meloni in the camp of their two nationalist pet peeves, Poland and Hungary.

A clash over the European post-pandemic recovery fund, of which Italy is the largest beneficiary with around 200 billion euros, is unlikely, even if Mme Meloni said he wanted “adjustments” to take into account rising energy prices, and these adjustments had to be negotiated at a “technical” level, according to Codogno.

For Sébastien Maillard too, “on economic subjects, it has no interest in opening a front with Brussels”. “If it came out of European nails, it would be against Italian interests,” he decides.

But it will be difficult for Brussels to avoid a confrontation over immigration, a favorite theme of the far right in Italy, which is one of the main gateways for migrants in Europe.