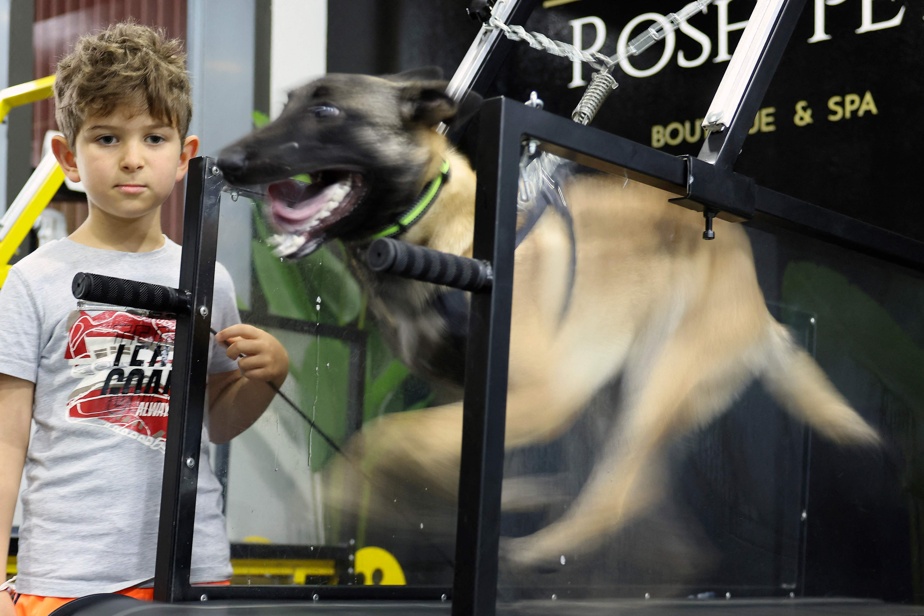 (Abu Dhabi) With temperatures hovering around 45 degrees all summer, the sportiest inhabitants of the United Arab Emirates work out in air-conditioned gyms. But their dogs were deprived of it.. until a recent initiative.

In Abu Dhabi, the capital of the wealthy Gulf state, a new pet food and accessories store has been making dog-friendly treadmills available for the first time in the country for the past two months. an air-conditioned room.

After being duly attached to a leash by the employees on the device, Oscar, a two-year-old Welsh Corgi, runs in place at high speed on the small black carpet lined with glass supposed to prevent falls.

Its owner, Mozalfa Khan, is delighted to have found this place, where she says she comes two to three times a week.

“In winter, I took him out, but in summer, he remained isolated because every time I took him outside, he fell ill from the heat,” says the young Pakistani expatriate.

With high temperatures and suffocating humidity, “he can’t really walk around and after two or three minutes he wants to come back”, explains this designer specializing in living design near the store.

His veterinarian advised him not to walk Oscar outdoors during the summer because of the high risk of heat stroke. “Last summer was really difficult for me because there was no place like this,” recalls Mozalfa Khan.

The United Arab Emirates, like the other Gulf countries, experiences long, particularly hot summers every year. Most of the inhabitants, about 90% of whom are expatriates from all over the world, remain cloistered in the interiors, private or public, which are heavily air-conditioned.

As the world suffocates, the Gulf is one of the regions most at risk of suffering from rising temperatures due to climate change, with areas that will be, for part of the year, potentially unlivable, according to experts.

And it’s a vicious circle: the current, intensive use of air conditioners, which are particularly energy-intensive, contributes to the ongoing global warming.

A dog lover, Mansour Al-Hammadi had the idea of ​​importing treadmills into his store, which sells kibble as accessories stamped with the logos of luxury brands.

And, to encourage his customers, he decided to charge them only a “symbolic price” of one dirham, or about 25 euro cents per minute.

Himself the owner of three dogs, the young Emirati says he wants to offer a “suitable environment”, recalling that these friends of humans need to exert themselves to stay physically and mentally fit, at least half an hour a day.

“So imagine when you can only walk them for a minute or two a day! “, points out Mansour Al-Hammadi.

“We have carefully studied the project so that it is 100% sound. Everything was chosen with care and not at random, in order to avoid any problem and not to harm the dogs”, he assures.

As night falls on Abu Dhabi, but not the searing heat, Destiny storms into the small gym, playing with the other dogs and climbing on the treadmill.

This seven-month-old Malinois shepherd “gets excited and agitated” every evening when it’s time for his session, says his owner Fahed Al-Monjed.

“For the health of the dog, it is better that she exercises and exerts herself. Using an indoor treadmill is the most appropriate solution”, believes this Lebanese-German expatriate, who works in tourism.

For him, this activity is “very healthy if you want to take care of your dog” because the devices are not automatic and adapt to the speed at which the animal itself wishes to run.

His dog Destiny likes high speed. She recently won a speed contest organized by the establishment.