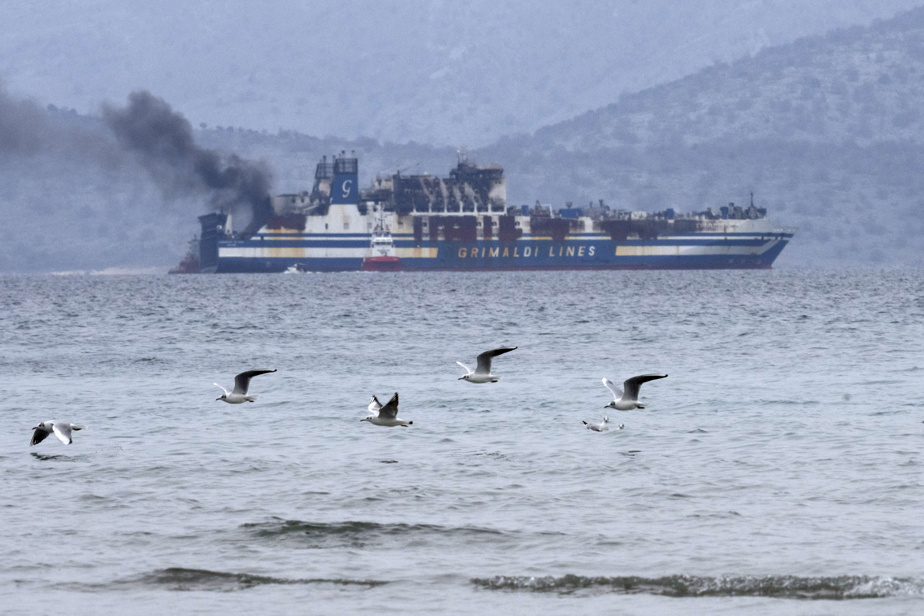 (ATHENS) A second body was found Wednesday evening in the garage of the Italian ferry which went up in flames six days ago off the Greek island of Corfu, announced the Greek coast guard.

Nine people are still missing and the search is intensifying.

All sources of the fire are now “extinguished” on the Italian ferry, according to the coast guard.

Only acrid smoke continued to rise from theEuroferry Olympiaon board which the firefighters were able to go up Wednesday at the end of the day in search of ten missing drivers.

The ferry from the Italian company Grimaldi was towed some 230 km from the island of Corfu to the port of Astakos on the west coast of the Greek mainland, to resume “more safely” fire extinguishing operations and search for missing passengers, according to the same source.

On Tuesday, the coast guard had indicated that “the possibilities of search and rescue on board the vessel Euroferry Olympia were exhausted in its present position” in Corfu.

The images of the boat, broadcast by public television ERT showed charred vehicles in the holds.

The violent disaster broke out at dawn on Friday ten nautical miles north of Corfu in the Ionian Sea, two hours after leaving the Greek port of Igoumenitsa en route to Brindisi in Italy.

Among the 281 survivors – 230 passengers including many truck drivers from Eastern European countries and 51 crew members – are two Afghan migrants who had not been registered on the passenger list, raising fears that other people were able to board without being counted.

The lifeless body of a Greek truck driver was taken out of the burning ship on Sunday. His family filed a complaint against the Italian company Grimaldi, “held responsible” for the fire, said their lawyer.

The investigation will determine the origin of the fire. But the ship’s owning company said the fire started in a hold reserved for vehicles. The ferry was carrying 153 commercial vehicles and 32 cars, according to the Grimaldi Group.

Three truckers remained hospitalized in Corfu for respiratory problems: a Belarusian released alive by rescuers on Sunday, a Bulgarian and a Romanian.