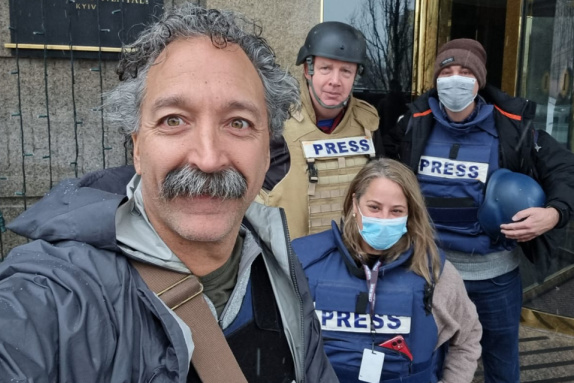 (New York) An Irish Fox News cameraman was killed while covering the war in Ukraine, the American television channel announced on Tuesday, referring to a “heartbreaking day” for the media and for all journalists.

Pierre Zakrzewski was accompanying journalist Benjamin Hall, who was injured when their vehicle was fired upon Monday in Horenka, near Kyiv, Fox News Media CEO Suzanne Scott said in a statement.

According to local media and the organization Reporters Without Borders, Ukrainian journalist Oleksandra Kuvshinova, who was a “fixer” (local contact who assists journalists on assignment) for the Fox News team, was also killed in the attack.

Based in London, Pierre Zakrzewski had been in Ukraine since February.

He was “a war photographer who covered virtually every international event for Fox News, from Iraq to Afghanistan to Syria,” Scott said.

He had been rewarded in December with an internal prize at Fox News, in particular for having “played a key role in the evacuation of our Afghan freelancers and their families after the American withdrawal” from the country, underlined the head of the chain.

Pierre Zakrzewski “risks his life in conflict zones to report for Fox News. He produces, edits and films without rest and under immense pressure”, said a star presenter of the chain, Bill Hemmer, at the time. He praised his “invaluable knowledge” and his “impeccable work ethic”.

Irish Prime Minister Micheal Martin said he was “deeply shocked and saddened by the death of Irish citizen and journalist Pierre Zakrzewski”, in a message on Twitter.

He also condemned “this blind and immoral war of Russia against Ukraine”.

“It’s a heartbreaking day for Fox News Media and for all journalists risking their lives to inform,” said Suzanne Scott.

Benjamin Hall, a British national and Fox News correspondent at the State Department, remains hospitalized in Ukraine, she said.

He was injured in the legs by shrapnel and placed in intensive care, Ukrainian Prosecutor General Irina Venediktova said on Monday.

Pierre Zakrzewski is the fifth journalist, and the second foreigner, killed since the beginning of the Russian invasion in Ukraine on February 24.

American Brent Renaud was shot and killed on Sunday in the northwestern suburbs of Kyiv. Before Oleksandra Kuvshinova, the Ukrainian journalist Evgueni Sakoun was killed in the bombardment of the television tower in Kyiv and his colleague Viktor Doudar perished during fighting near Mykolaiv (south), according to the Ukrainian authorities who also counted more than 30 wounded among members of the press covering the conflict.

At least 636 civilians, including around 50 children, have been killed in Ukraine and more than 1,100 have been injured, according to the latest UN count, which stresses that its tolls are probably much lower than the reality.

At least 3 million people have fled Ukraine since the start of the invasion, the International Organization for Migration (IOM) in Geneva said on Tuesday.