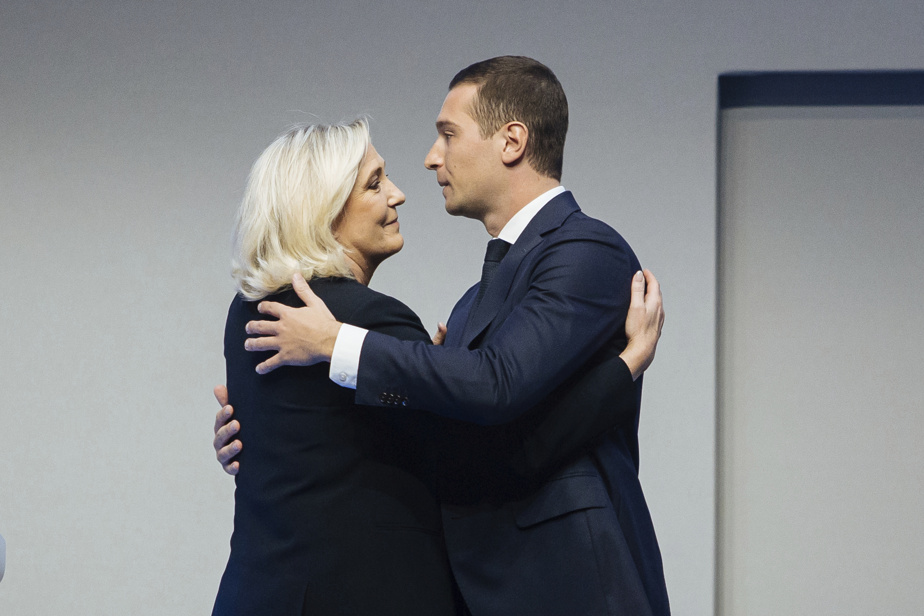 (Paris) In the midst of a controversy over a deputy accused of racism, Jordan Bardella was elected Saturday president of the National Rally, the main far-right French party, succeeding Marine Le Pen, who came second in the French presidential election in April.

The young 27-year-old MEP is the first leader of this party which does not bear the name of the Le Pen family dynasty: Jean-Marie Le Pen founded the National Front in 1972, which became the National Rally led by his daughter Marine Le Pen. .

This succession comes in the middle of a racist incident triggered Thursday by a deputy of his party in the National Assembly, who launched “that he return to Africa! as a black member of the radical left evoked a boat of migrants in distress in the Mediterranean.

This incident undermines the strategy of trivialization of the party, which Jordan Bardella has promised to continue. Especially since the sanctioned deputy, Grégoire de Fournas, has regularly shown his support for the elected candidate with nearly 85% of the vote against Louis Aliot, ex-companion of Marine Le Pen.

By targeting “the camp of good”, Marine Le Pen seemed to refer to it during a farewell speech to the presidency, pointing to “lie”, “disloyalty”, “maneuver”, “shame”. “Adversity, it is more necessary to face it and fight it than to comment on it and to undergo it”, she affirmed before the Congress of the party.

Marine Le Pen, who achieved a record score of 41.5% in the second round against Emmanuel Macron in April, is stepping back after eleven years at the head of the party, while saying she wants to continue her “work” and her fight politics, without excluding a fourth candidacy.

” There is still a lot to do […] I remain mobilized more than ever, ”she said before the results of the internal election.

Jordan Bardella, companion of a niece of Marine Le Pen and rising star of the French far right, has indicated on several occasions that he intends to support her for a new presidential candidacy in 2027.

It is therefore above all a question for Marine Le Pen of freeing herself from sometimes thankless internal tasks, while the epicenter of the RN is now in the National Assembly, where the deputy of Pas-de-Calais (northern France) shines on a large group of 89 elected officials (out of 577), ten times more than in previous elections.

The RN has become the first opposition party, in a hemicycle where the Macronists have lost the absolute majority and where the alliance of leftist parties Nupes has some 150 seats.

Marion Maréchal, 32, niece of the far-right leader and long considered the heiress of the family, was not in the running. She left the party before the 2022 presidential election for Reconquest, an economically more liberal movement of former polemicist Éric Zemmour, a rival of her aunt who won 7% in the presidential election.

If Marine Le Pen has refused any alliance with Reconquête, Jordan Bardella’s links with the “identitarians” and his indulgence towards those who left the party to join Éric Zemmour have often been the subject of criticism.

His competitor Louis Aliot lambasted in a forum last month the “identitarians” and, above all, “the followers of the great replacement”, a racist and conspiracy theory defended by Éric Zemmour that Jordan Bardella took over in August 2021.

In mid-October, he considered taking part in a controversial demonstration organized by Reconquête after the murder of a 12-year-old girl by an Algerian under a deportation order, before giving up in extremis.

Jordan Bardella, who is due to speak at the end of the day, intends with the RN to take advantage of a rise of the far right in the European Union, illustrated recently by the victory in the Italian legislative elections of Giorgia Meloni, at the head of the party post-fascist Fratelli d’Italia, who became head of government.