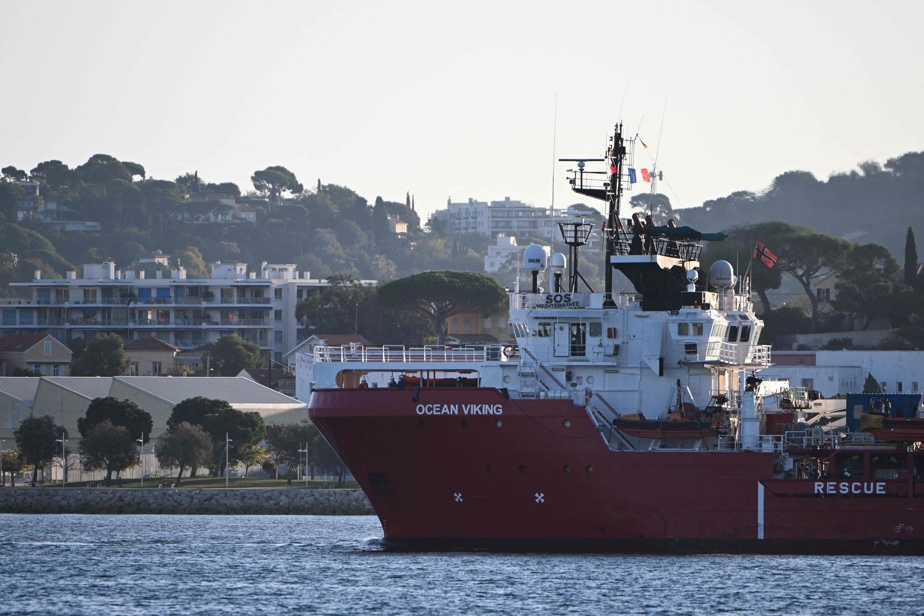 (Toulon) The humanitarian ship ocean viking landed 230 migrants rescued in the Mediterranean on Friday at the military port of Toulon (southern France), before some were relocated to the rest of Europe, Paris and Rome multiplying the invectives.

This is the first time that an ambulance boat operating off the coast of Libya has landed survivors in France. An exceptional welcome, by “duty of humanity”, underlined the French Minister of the Interior Gérald Darmanin criticizing “a very inhuman Italy”.

The head of the Italian government Giorgia Meloni denounced Friday an “aggressive, incomprehensible and unjustified” French reaction, recalling that her country has welcomed nearly 90,000 migrants this year while the European countries which had pledged to help and to take care of 8,000 people, had finally accommodated only 117.

In Toulon, theocean vikinga ship with a red hull chartered by the NGO SOS Méditerranée, docked around 8:50 a.m. at the military port, without access for the media.

“There is a lot of emotion on board, everyone is very, very tired, it’s the end of an ordeal,” Laurence Bondard told AFP, for SOS Méditerranée.

L’ocean viking wandered at sea for three weeks for lack of a port in Italy to disembark men, women and 57 children, some from countries at war rescued off the coast of Libya.

At the beginning of the afternoon, these migrants began to be transferred by bus to a holiday center on the Giens peninsula in Hyères, a town about twenty kilometers east of Toulon, declared a “zone of “international expectation” for about twenty days, noted AFP journalists.

The survivors “will not be able to leave the administrative center and will therefore not technically be on French soil”, according to Gérald Darmanin.

All these people will be subject to health monitoring, then security checks by the intelligence services, before being heard by the French Office for the Protection of Refugees (OFPRA), which grants refugee status and can carry out up to 90 interviews per day from Saturday.

Two-thirds of the people – 175 – will leave France to be relocated to 11 countries, the ministry said, citing Germany which is to welcome around 80, Luxembourg, Bulgaria, Romania, Croatia, Lithuania, Malta, Portugal and Ireland, Finland and Norway.

In the midst of the presentation of a bill on immigration to France, which plans to reform asylum procedures in order to achieve more deportations, Gérald Darmanin’s entourage specified that “those who do not receive asylum, will be deported directly from the waiting area to their country of origin”.

“The possibility of expulsion is the principle of the waiting area. But for people who have just arrived, who have survived a crossing of the Mediterranean, it raises the question of whether they will be able to immediately give an account and a report of the persecutions they incur in good conditions ”, expressed concern to AFP Laure Palun, who heads ANAFÉ (national association for border assistance for foreigners).

The leader of the main far-right party in France, Marine Le Pen, has called for migrants to be sent back to their country of departure, criticizing the reception of theocean viking.

“These ships which bring the migrants recovered at sea to safety must bring them back to their port of departure,” she added, estimating that the boat should have docked in Tripoli (Libya) or possibly in Tunisia.

Éric Zemmour, defeated in the presidential and legislative elections, also felt that these migrants should have been “sent home”, during a press briefing in Toulon.

The left and environmentalists have hailed a “decision worthy of the values” of France.

A landing in France “is a situation that must not happen again,” said SOS Méditerranée. The NGO will go back to sea “because there have been more than 20,000 deaths since 2014 in the Mediterranean Sea and we do not accept that this sea becomes a cemetery”, added the director of operations, Xavier Lauth. .

Doctors Without Borders also said on Thursday that its rescue ship, the Geo Barents, is heading back to sea after successfully landing migrant survivors in Italy.

Since June, a relocation system, which had already undergone a first phase in 2019, provides for a dozen Member States, including France, to voluntarily welcome 8,000 migrants who have arrived in so-called “front line” countries such as France. ‘Italy. France announced on Thursday the suspension “with immediate effect” of the planned reception of 3,500 migrants currently in Italy.

Mme Meloni said he wanted “a common solution”: “It’s not smart to argue with France, Spain, Greece, Malta or with other countries”.

Since the beginning of the year, 1,891 migrants have disappeared in the Mediterranean, trying to reach Europe, according to the International Organization for Migration (IOM).