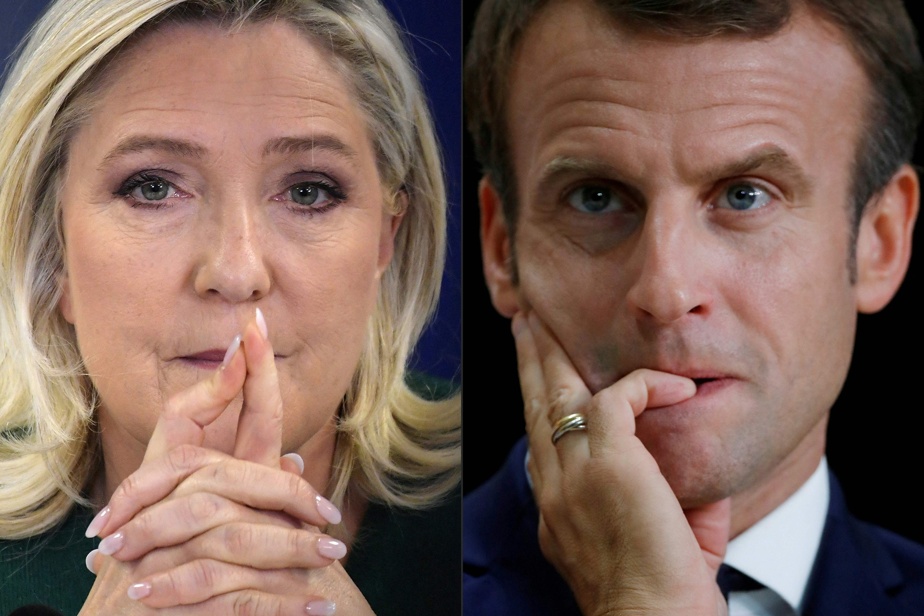 (Paris) The battle for the presidential election was transposed on Wednesday to the field of diplomacy and Europe, Marine Le Pen placing herself at odds with the foreign policy led by Emmanuel Macron, whose “limited vision of international relations” she denounces. “.

“We must restore France’s unique place in the world,” said the far-right candidate during a press conference, briefly interrupted by a left-wing group reproaching her for her “complacency” with Vladimir Putin, where she outlined its foreign policy positions.

Europe, NATO, war in Ukraine, Algeria, China: Mme Le Pen reiterated his desire to take France out of NATO’s integrated military command and pleaded for a “strategic rapprochement” between the Alliance and Russia “as soon as the Russian-Ukrainian war is over and has been settled by a treaty of peace “.

She said she did not want either “submission to Moscow” nor “follow-manship with regard to the Biden administration”, particularly in the Asia and Oceania region, and assured that she would “not leave the Paris agreement on the climate “.

For the RN candidate, the objective was to establish her presidential stature against Mr. Macron, strong in the experience of a five-year term and who denounces for his part the will of Mr.me Le Pen to leave the EU, without saying so.

Emmanuel Macron, who will be the guest of 8 p.m. on TF1 this Wednesday, has made Europe the central pillar of his diplomacy for five years and underlined Tuesday evening in Strasbourg that the second round, on April 24, will also be “ a referendum on Europe”. Nationalism leads to “an alliance of nations that want to go to war” in Europe, he said aiming at his rival.

“Frexit is by no means our project. We want to reform the European Union from within,” replied Mr.me The pen.

She also considered “unnecessarily insulting” recent remarks by President Macron with regard to Poland, with which she has forged ties.

With regard to Germany, whose anti-nuclear policy she castigated, Ms.me Le Pen says he takes note of “irreconcilable strategic differences” and therefore wants to stop “all cooperation with Berlin” on the military level. She also denounced “French blindness to Berlin”. “I will restore secret diplomacy, because it is the only one that is effective in the talkative and open diplomacy of Emmanuel Macron,” she said, denouncing his multilateralism.

The skirmishes between the candidates have multiplied since the start of the second round campaign with fanfare on Monday.

From dawn, the two adversaries had bitter exchanges. Visiting a construction company in Gennevilliers (Hauts-de-Seine), the RN candidate judged that the government and Emmanuel Macron were in “denial” in the face of the “wall of inflation” which France was going to face .

Asked earlier on France 2 about the measures to take in the face of inflation, Emmanuel Macron had already replied that “what we have decided with the government on electricity, gas and gasoline is more efficient than a reduction in VAT”, as proposed by Mme The pen.

The candidate also denounced the “febrility” of her opponent, who criticizes her for an “authoritarian drift” with regard to the press and institutions.

Marine Le Pen is on the defensive on another front, this time with the National Commission for the Control of the Electoral Campaign (CNCCEP), which, according to France Inter, has asked her for clarification on her profession of faith for the second round.

In the crosshairs of the “gendarme” of the campaign, figures put forward to illustrate Emmanuel Macron’s record on insecurity and immigration.

“I really do not see what could push the judge of the election to prohibit my profession of faith, which would amount to addressing to the French only the profession of faith of the outgoing president”, replied Marine Le Pen. “Beware of this type of maneuver […] be careful to respect democracy,” she warned.

In view of April 24, the two finalists are eyeing the voters of Jean-Luc Mélenchon, who came in third place on Sunday evening with 21.95% of the vote.

Abstention, blank vote or Emmanuel Macron vote? Jean-Luc Mélenchon launched the consultation of his 310,000 supporters on Wednesday, the ex-candidate having already called not to “give a single voice to Le Pen”. The consultation, the results of which will be public, ends on Saturday at 8 p.m.

Three polls published on Wednesday give Emmanuel Macron ahead of Marine Le Pen in the second round in a range of 53 to 55% against 45 to 47%.