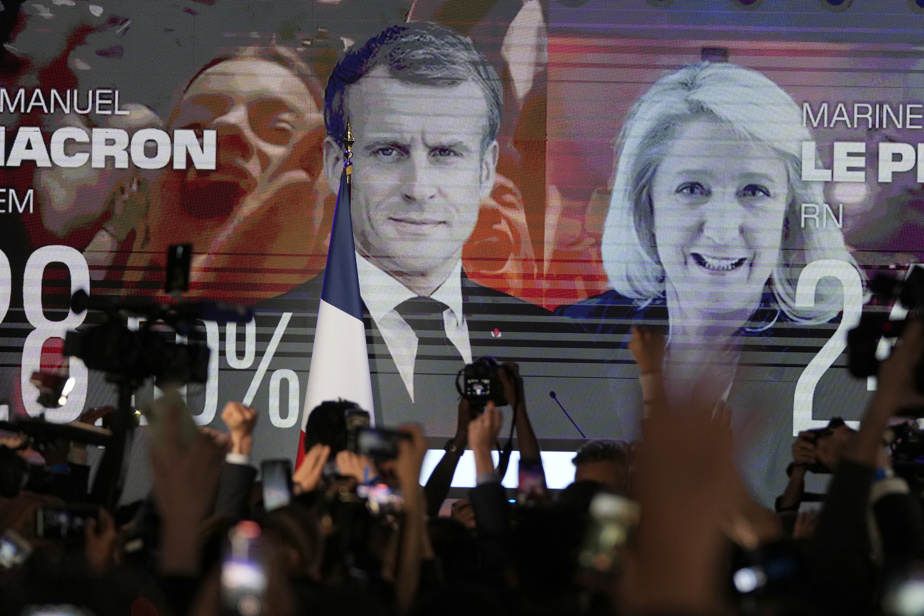 (Paris) The day after the first round of the presidential election in France, the two finalists, Emmanuel Macron and Marine Le Pen, occupy the field to seek the votes of voters, especially on the left, before a second round on April 24 which will take place. announcement tight.

Arrived in the lead on Sunday with 27.85% of the vote, more than four points ahead of the candidate of the National Rally (23.15%), the outgoing president and centrist candidate went to the north, where his far-right rival has a strong anchor.

During a walkabout, he was questioned about his controversial plan to postpone the retirement age to 65 years. “I voted for you but I regret it, you don’t like pensioners very much,” a woman challenged him.

Later in the day, the presidential candidate said he was ready to “open the door” to a postponement of the retirement age to 64, rather than 65 as it appears in his program, “if there is too much tension” and that it can “build consensus”.

Having entered the campaign late due to the war in Ukraine, with little travel and only one large rally, Mr. Macron will be much more present on the ground before April 24, with in particular a giant rally announced on Saturday in Marseille (south).

Mme Le Pen does not intend to give up an inch of ground either and announced a surprise trip to Yonne (center) on Monday with the theme “purchasing power and inflation, consequences for farmers”.

Convince on the left

She focused her entire campaign on purchasing power and pushed her favorite themes, the fight against immigration and national priority, into the background, leaving extremes and radical projections to her far-right rival Éric Zemmour (7.07 %).

A strategy that has worked for her since she achieved the highest score for the far right in the first round of a presidential election.

“We approach this second round with experience. The one from five years ago is going to be very useful,” Ms.me The pen. “We have to keep fighting, against all odds,” she said.

Mr. Macron and Mr.me Le Pen absolutely need to broaden their first-round electoral base, especially on the left. Both camps used the same formula of “reaching out”, in particular to the voters of Jean-Luc Mélenchon.

With 21.95% of the vote, Mr. Mélenchon, leader of France Insoumise (LFI, radical left), made, by far, the best score on the left, with a young and popular electorate, courted by the two qualified from the second round.

Without calling to vote Macron, the latter urged his supporters on Sunday evening not to give the slightest voice to Mme The pen.

But for Jordan Bardella, president of the RN, “there are many voters of Jean-Luc Mélenchon who do not want retirement at 65, who do not want to put the politics of France in the hands of McKinsey and ‘other private practices and who I think […] will vote for Marine Le Pen in the second round.

The candidate of the traditional right Valérie Pécresse (4.78% of the vote) announced for her part her intention to vote “in conscience” for Emmanuel Macron.

The challenge will also be to mobilize voters while the first round was marked by a strong abstention (25.14%) and a spectacular disintegration of the two historical French parties, the Socialist Party and the Republican Right.

Illustration of this debacle, Valérie Pécresse launched an appeal for donations to allow her party to reimburse campaign costs and for “the survival of the Republican right”. French law provides for a very limited reimbursement of campaign expenses for a party obtaining less than 5% of the vote.

The highlight of the campaign between two rounds will be the televised debate between the two finalists on April 20.

In 2017, it had been disastrous for Mme Le Pen, who appeared feverish and did not master the files, and had contributed to his defeat against Mr. Macron.

The outgoing president “is no longer the new candidate who embodied a form of freshness” and Mme Le Pen “is no longer the one who generates a lot of rejection, she has worked on her positioning in terms of image, she appears to be much more in touch with the French”, he judges.