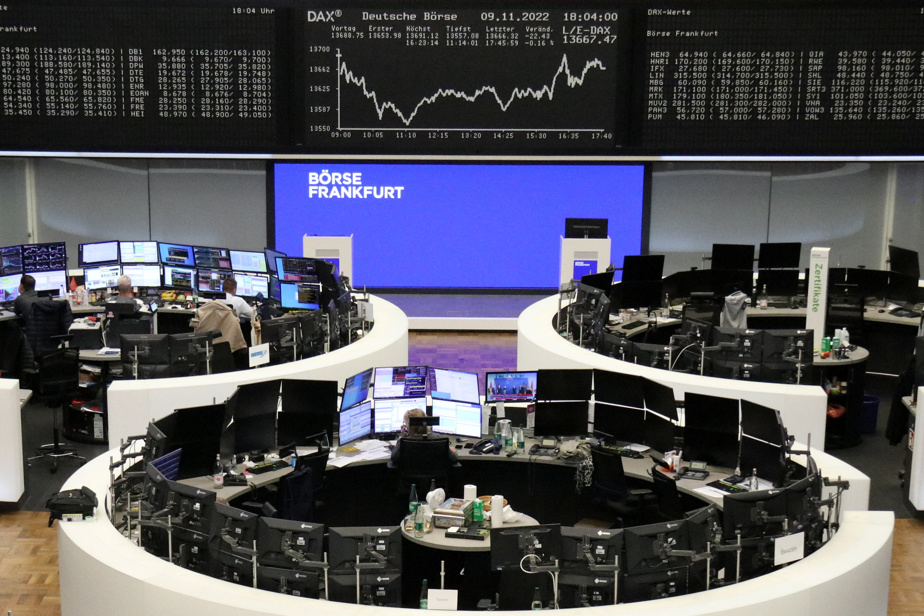 (Paris) World stock markets on Thursday welcomed the announcement of a stronger-than-expected slowdown in US inflation in October, a surprise that dragged the dollar down and a strong easing in the bond market.

On Wall Street, the Dow Jones climbed 2.57% and the NASDAQ jumped 5.52% around 10:10 a.m. The good news on inflation swept away the uncertainties that had plagued brokers the day before on the electoral front.

After an opening in the red, the European indices progressed: the Frankfurt Stock Exchange climbed by 3.39%, the Parisian place rose by 2.03%, that of Milan by 2.01% and London gained 1.17%.

Inflation slowed in the United States in October, to 7.7% year on year from 8.2% in September, its lowest level since January 2022, a sign that the measures taken by the central bank (Fed) could begin to bear fruit.

“This is the fourth consecutive month of headline inflation in the United States and given that inflation excluding food and energy is also down after two months of rebound, this supports the idea that the peak of the “Inflation is in place and that the American Federal Reserve will take it into account”, estimated with AFP Alexandre Baradez, analyst at IG France.

According to him, investors are allowing themselves to consider “most likely a rate hike that will not exceed 50 basis points” at the next Fed monetary policy meeting in mid-December, and “to imagine that rates could begin to level off”.

The Fed has raised its key rates sharply since March to curb soaring prices. At the beginning of November, it increased its main key rate for the fourth consecutive time by three quarters of a percentage point, bringing it to a range of between 3.75% and 4%, the highest for almost 15 years.

“This beautiful turning point in the fight against inflation” has “enough to give a breath of fresh air to the riskiest assets, but not necessarily lead to a massive rebound”, insofar as part of this slowdown has already been integrated in market prices,” says Baradez.

The dollar plunges, strong relaxation on the bond market

The dollar nosedived Thursday against the pound and to a lesser extent against the euro, after the marked turn in US inflation.

The fall of trading platform FTX, which was to be bailed out by rival Binance before the latter threw in the towel, has caused bitcoin to lose almost a fifth of its value since Sunday.

On the sovereign debt market, yields, which move in the opposite direction to prices, fell: the US ten-year rate fell to 3.85%, against 4.08% at the close on Wednesday and the German Bund, which benchmark in Europe, stood at 1.99%, compared to 2.16%.

Oil prices were down slightly after sharp declines the day before weighed down by sharply rising US commercial crude oil reserves last week. Around 8:10 a.m., a barrel of WTI yielded 0.59% to 85.30 dollars and a barrel of Brent from the North Sea dropped 0.43% to 92.26 dollars.