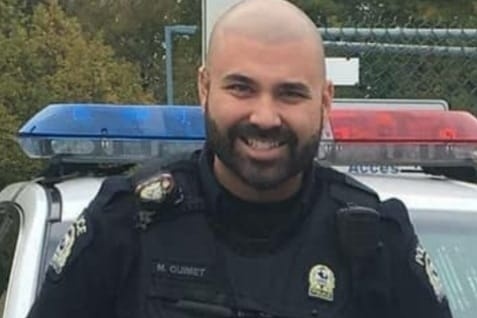 Former conspiratorial police officer Maxime Ouimet pleaded guilty on Monday to a charge of harassing communications against TVA Nouvelles journalist Yves Poirier. The figurehead of the anti-mask movement had published the contact details of the reporter on social networks. Gestures “strongly reprehensible”, according to the judge.

“Journalists do essential work in our society. They have the right to do their job without fear of being bothered and harassed by anyone who does not agree with what they write, ”insisted judge Marie-Josée Di Lallo, benefiting the 36-year-old man on conditional discharge. Eventually, the ex-police officer will be able to get rid of his criminal record.

The man who is nicknamed the “people’s policeman” was not present in person at the Montreal courthouse, since he attended his hearing by videoconference. Maxime Ouimet took refuge in the United States last winter to avoid sanitary measures in Quebec.

The ex-police officer also intends to “immigrate to Florida”, we learned on Monday. “He has already started his visa procedures,” explained his lawyer, Ms.and Samantha Di Done. To justify the imposition of a discharge, the criminal lawyer argued that Maxime Ouimet had to travel “internationally” for his company Scalp Elite, specializing in hair care. His lack of a criminal record was also highlighted.

Maxime Ouimet attacked journalist Yves Poirier last November by posting a message on his “people’s policeman for the people” Facebook page urging people to contact the reporter to give him “scoops”. He thus gave the cell phone number of the TVA reporter, as well as that of the journalist of The Press Tristan Peloquin.

Yves Poirier received around thirty calls and saw his voicemail fill up “with messages of insults and provocation”, according to the summary of the facts of the Crown prosecutor, Ms.and Delphine Mauger. Maxime Ouimet targeted the TVA reporter because the latter had just broadcast a report on a “conspiratorial mass” in which he had participated.

The charge of harassing communications against Tristan Péloquin was dropped by the prosecution following his admission of guilt.

As part of his conditional discharge, the ex-policeman will have to submit to a one-year probation, where he will notably be prohibited from mentioning the names of the two journalists on social networks. Note that he also donated $3,000 to the Marie-Vincent Foundation, an organization chosen by Mr. Poirier.