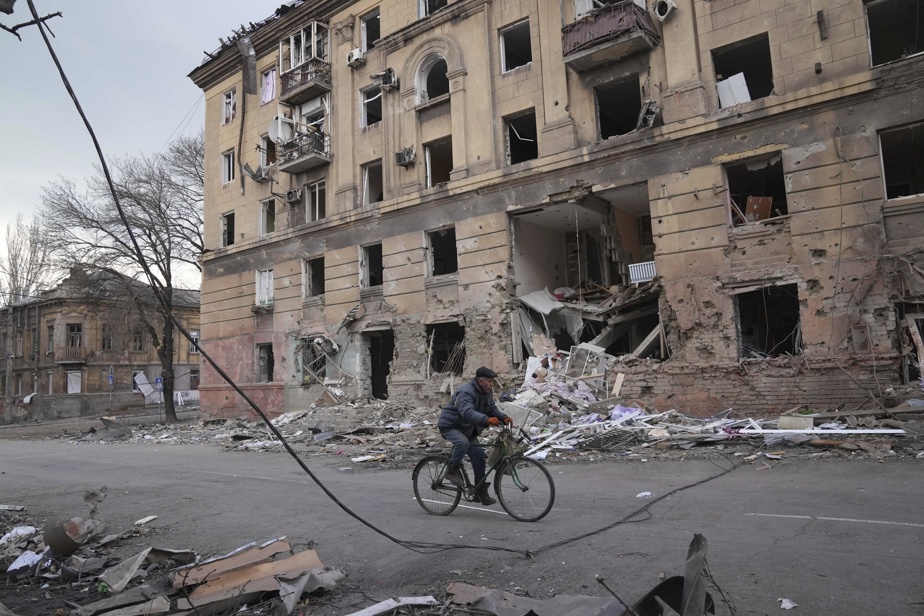 (Washington) Humanitarian and security aid is flowing into Ukraine. Less visible, the macroeconomic support provided by the international community to the government is just as vital to enable the country to continue to function.

“The Ukrainian economy is collapsing. The government needs to spend colossal sums quickly without having access to tax or domestic revenue,” said Adnan Mazarei, an expert at the Peterson Institute for International Economics, a Washington-based think tank.

“It is absolutely crucial that the international community provide rapid assistance not only for humanitarian purposes, but also so that some of the basic functions of government can continue,” he said.

He also notes the need to inject cash into the government’s coffers to support the banking sector in particular, while the population is fleeing the country en masse, taking their savings with them.

Of the $13.6 billion in aid to Ukraine expected to be released by the United States this week, $1.8 billion is to be spent on Ukraine’s macroeconomic needs to ensure “continuity of government”, prevent cyberattacks and support the energy sector, according to the bill introduced in the US Congress.

For its part, the board of directors of the International Monetary Fund (IMF) on Wednesday approved aid of 1.4 billion dollars for Ukraine.

“The funding needs are large, urgent and could increase significantly as the war continues,” responded its director general, Kristalina Georgieva. She also signaled that Ukraine would experience a “deep recession” this year.

Before the war, the Washington institution was counting on a growth of the Ukrainian economy of 3.6% this year.

The emergency aid must allow the government to “meet the urgent needs of the balance of payments […] and will provide critical short-term support,” the Fund said.

These sums are significant in relation to Ukraine’s GDP: nearly $155.5 billion at the end of 2020, according to World Bank data.

The IMF had an ongoing program with Ukraine with 2.2 billion to be released by the end of June.

But this agreement was canceled to design another dedicated to the recovery “when conditions allow it”, specified the IMF.

The 1.4 billion are granted under the “rapid financing instrument”, which makes it possible to obtain funds without delay and without conditions, or almost.

Kristalina Georgieva had stressed Tuesday evening that the time was for “crisis management” and not for the “reforms” which were required before the conflict.

Same story at the World Bank. In announcing its nearly $500 million in aid on Monday, it highlighted what is at stake: helping the government “provide essential services to Ukrainians, including salaries for hospital workers, pensions for the elderly and social programs for vulnerable people”.

Axel van Trotsenburg, its director of operations, repeated on Wednesday that “the Ukrainian government desperately needs budgetary resources to pay pensioners, to pay the salaries of civil servants, to run the health system”, during an interview on Sky News.

Experts point out, however, that despite its scale, direct aid to the government will probably not be enough to avoid a major economic crisis, while Ukraine was already before the invasion by Russia, among the poorest countries in Europe.

“Money flows can never really replace GDP losses,” observes Homi Kharas, an economist at the Brookings institution, citing in particular the commercial losses which will be significant. “Silver can help reduce the impact of this a little bit, but it certainly won’t be able to offset it” completely.

Well aware of this, the World Bank, which will provide a total of some three billion dollars in the coming months, has dubbed its assistance “Economic Emergency Recovery Financing”.

In other words, it is already post-conflict oriented.

Nobody knows how long the war will last but one thing is certain: there will be a “huge problem of reconstruction in Ukraine”, opines Adnan Mazarei. And the community must prepare for it now to avoid a lasting impact in Ukraine and neighboring countries.

The head of the IMF agrees: once the war is over and a damage assessment has been carried out, “substantial additional support will probably be necessary to support reconstruction efforts”.