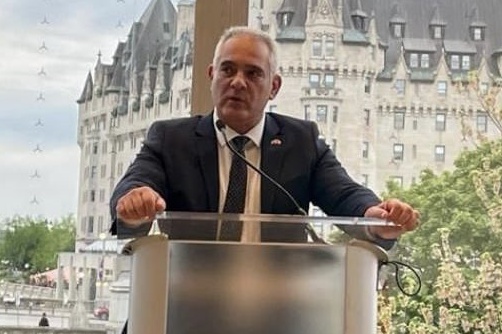 (OTTAWA) Israel’s ambassador to Canada has said he intends to leave his post shortly after a change of government in his country.

Ronen Hoffman tweeted Saturday night that he was making the decision because of “different policies” being pursued by Israel’s new government.

He explained that his personal and professional integrity compelled him to make the decision to cut short his stay and return to Israel this summer.

Prime Minister Benjamin Netanyahu’s new government is considered the most right-wing in Israel’s history and critics have argued that his plan to overhaul the country’s judicial system would jeopardize democracy.

Some 100,000 demonstrators marched in Tel Aviv on Saturday to protest against Mr. Netanyahu’s plan.

Mr. Hoffman was appointed to his post in Ottawa just over a year ago and says he will continue in the role until a replacement is named later this year.

With information from The Associated Press