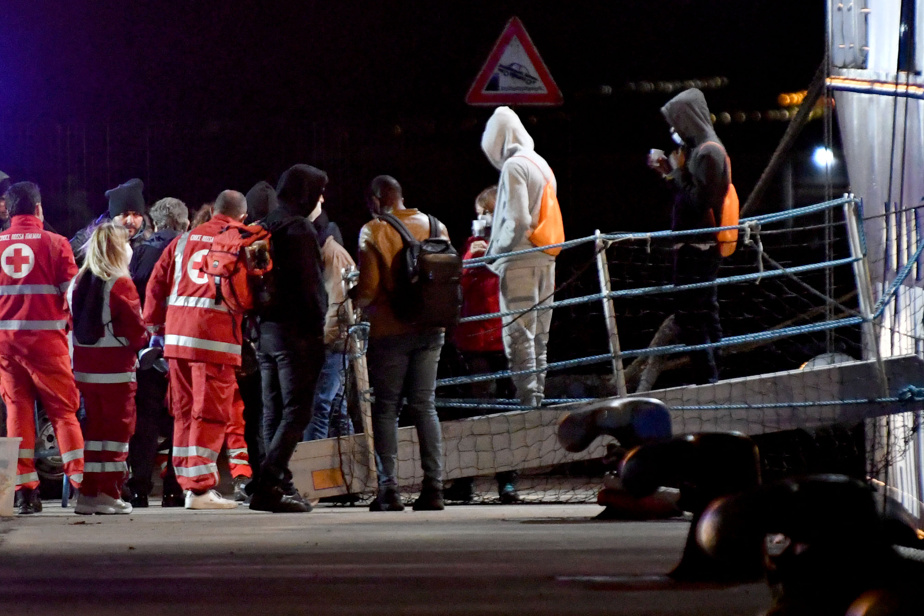 (Rome) Italy’s new far-right government authorized the disembarkation of minors and other migrants with medical problems on Sunday, but intends, according to government sources, to send others back on board humanitarian NGO ships.

Three minors and a baby were the first to disembark at dawn from the boat Humanity 1followed by underage boys and adult men with medical conditions, said Petra Krischok, press officer for SOS Humanité.

A total of 144 people disembarked from Humanity 1a ship under the German flag, at the port of Catania, but 35 remained on board, according to this source.

They “are extremely depressed,” she added. “For now, we are staying here and waiting,” she said, not knowing if the authorities had decided to order the boat to leave.

Interior Minister Matteo Piantedosi had said on Saturday that the government would not back down from its humanitarian obligations, but that those who are not “qualified” should be cared for by the ship’s flag state.

Three other ships, which are carrying a total of 900 migrants, asked, in vain, to be able to dock: the Rise Aboveof the NGO Mission Lifetime, also under the German flag, as well as theocean viking of SOS Méditerranée and the Geo Barents of Médecins sans Frontières, registered in Norway.

the Geo Barents claimed to have been contacted by the Italian authorities who intend to “evaluate the vulnerable cases” among the 572 people rescued on board.

“Those who remain in the ship will receive the necessary assistance to leave Italian territorial waters,” sources close to the Minister of Transport and populist leader of the Antimigrant League Matteo Salvini, on which the ports depend, said on Sunday.

Italy’s new far-right government, which was sworn in last month, has pledged to crack down on migrants by boat heading from North Africa to Europe.

More than 87,000 people have landed in Italy this year, according to the Interior Ministry, 14% of whom were rescued by humanitarian ships.

The boss of the Democratic Party (PD, main left formation) Enrico Letta accused the government on Twitter of violating international treaties. The PD claimed that Matteo Piantedosi should explain himself to parliament.

Opposition deputy Aboubakar Soumahoro, who was present during the landing of theHumanity 1criticized the “selection of shipwrecked migrants”, which he says violates international law.

For him, the government treats “the castaways, already exhausted by the cold, fatigue, trauma and torture as objects”.

“If the remaining castaways are rejected, we will challenge this decision in all appropriate forums,” he said on Twitter.

Norway’s foreign ministry said on Thursday it took “no responsibility” for people rescued by Norwegian-flagged private vessels in the Mediterranean.

Germany insisted, in a diplomatic “note” addressed to Italy, on the fact that the charities “made an important contribution to the saving of human lives” and asked Rome “to help them as soon as possible”.