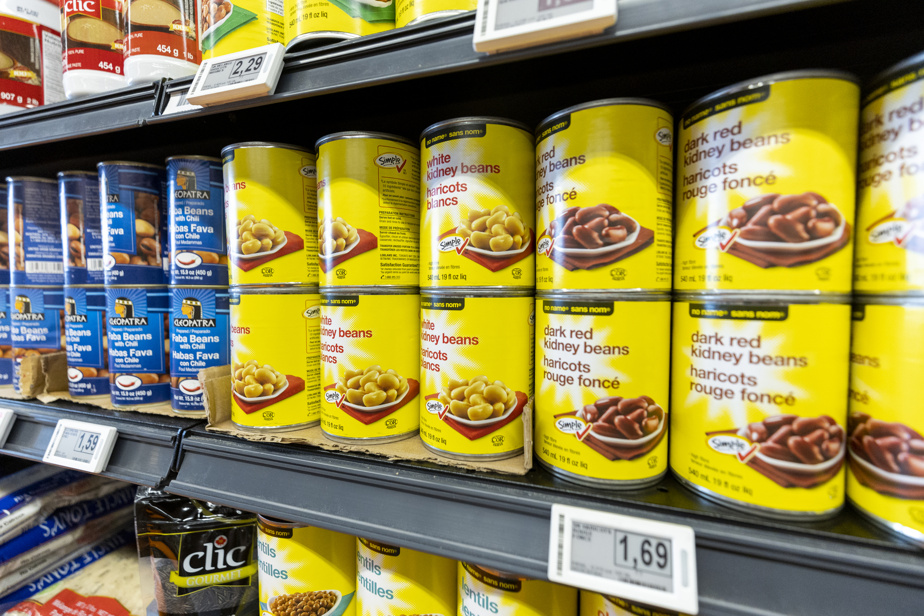 The price freeze campaign on 1,500 Sans nom brand products at Maxi and Provigo, strongly criticized by many observers who saw it as a simple marketing strategy, has obviously hit its target. More than half of Canadian consumers are convinced that this initiative has the effect of reducing their grocery bill. Flawed reasoning, however, warn the experts.

The price freeze announced by Loblaw in October saves money at the supermarket, say 65.2% of consumers in the country. At least that’s what a report released Thursday by Dalhousie University’s Agri-Food Analytical Sciences Laboratory reveals, following a survey of 5,530 respondents.

According to the poll, “47.5% of Canadians intend to buy more food products labeled No Name than they normally would because of the price freeze.” In Quebec, 53.1% of respondents expressed this intention.

However, putting the famous products known for their yellow packaging in your basket, instead of opting for other brands, does not necessarily mean that you save money, underlines Christian Desîlets, professor of advertising at Laval University. .

Consumers have taken “a cognitive shortcut that it was tempting to take”, but which is still wrong, argues Christian Desîlets. “What consumers took away was that Maxi was making an effort to lower prices. In French, they translated that as: “It will cost less”. »

“A price freeze means that we will stop increasing prices for a determined period,” adds Mr. Desîlets. But No Name brand products are not necessarily always cheaper than those of other private or national brands, whose prices vary according to the promotions offered.

Last week, for example, the No Name white cheddar (400 g format) cost $5.99, while in the same brand, the President’s Choice brand – whose prices are not frozen – cost $5. $49. On the Metro side, the same Sélection brand cheese was also advertised at $5.99.

This reasoning by consumers also “surprised” Sylvain Charlebois, director of the Laboratory of Analytical Sciences in Agrifood. “In reality, if there is a price freeze, that does not mean that it is cheaper,” he also recalls.

“Freezing prices for Maxi means trying to continue growth by attracting more consumers to its in-house products rather than letting them go to national brands,” adds Christian Desîlets. Of course, this is not good news for competitors, he argues. I have the impression that they will react. What the other chains will take into consideration is that the price freeze is interpreted by the population as a drop. »

However, other brands like IGA and Metro will not venture into the field of price freezes, believes Sylvain Charlebois, who points out that they do not have the same business model as Loblaw. The specialists consulted nevertheless believe that the price freeze campaign could restore the image of all private brands, perceived as being less expensive.

Furthermore, the report also shows that “64.4% of respondents believe that [la politique du prix le plus bas] is a better strategy than freezing prices for a fixed period”.

“This is where we could see a reaction from the signs against the Loblaw freeze, indicates Mr. Charlebois. A low price guarantee is anytime, there is no time limit. »

However, this guarantee is not offered everywhere. In April, an article published in The Press reported that Loblaw had seen “a sharp increase in the number of people taking advantage of the Unbeatable program.”

The principle is simple: “If a customer sees a product advertised cheaper elsewhere, we will match the price,” said Johanne Héroux, senior director, corporate affairs and communications, at Loblaw.

The consumer must then provide proof – circular, photo – that the item is less expensive at the competitor’s.

On the IGA side, the policy does not apply to all products. ” Whether [un concurrent] offers a lower price on any item that we display in a flyer with an “Unbeatable Price” badge, we will sell this item to you for 1 cent less than the competitor’s current price upon presentation of the competitor’s flyer or your invoice”, can we read on the brand’s website.

Metro does not offer this type of guarantee.

Remember that the price freeze at Maxi and Provigo will end on January 31, 2023.