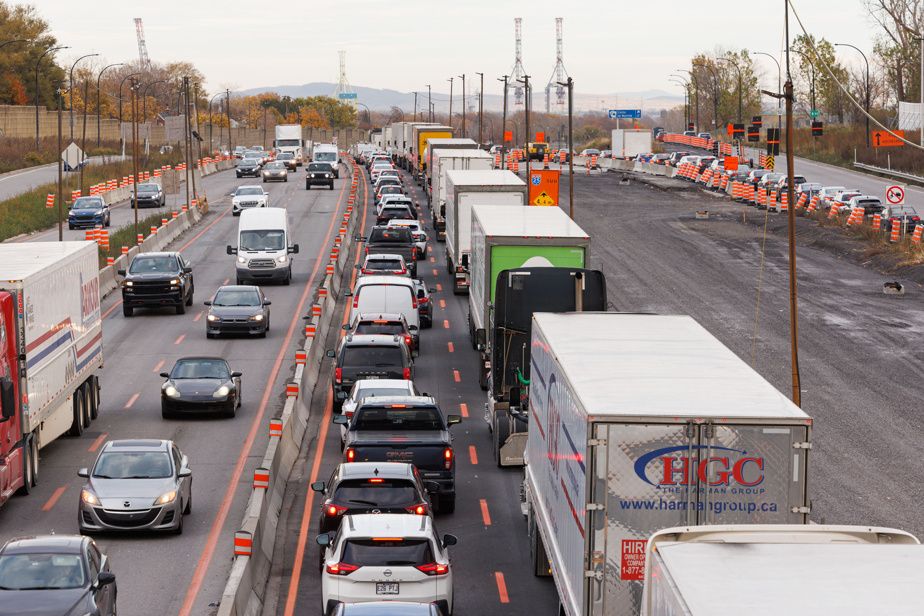 It couldn’t last forever. After relatively easy rush hours despite the closure of the Louis-Hippolyte La Fontaine tunnel since the beginning of the week, traffic is finally back. At 5:00 p.m., it took more than an hour to reach the tunnel heading south on the island of Montreal.

It took more than an hour to cover the 7 kilometers separating Highway 40 in Anjou and the entrance to the tunnel. In comparison, in the opposite direction, only 11 minutes were needed to cover the 22 km between Beloeil and the tunnel.

“It’s not surprising, because we knew that by having this configuration of two lanes towards Montreal and one lane towards the South Shore, there would be repercussions on the travel time and that it could be up to ‘four times higher than the times we knew previously,’ MTQ spokesperson Sarah Bensadoun explained in an interview on Wednesday.

Since the beginning of the week, traffic has remained relatively fluid, despite the partial closure of the tunnel, while three lanes will be closed until 2025.

As of 5 p.m. Wednesday, the wait time to get to the southbound tunnel on the island rose to 70 minutes, the first since Monday.

The office of Minister Geneviève Guilbault recalled that the first two days were not representative. “We expected that the access time to the tunnel would be a little longer”, indicated to The Press spokesperson Louis-Julien Dufresne.

Tuesday, the adviser to the Ministère des Transports (MTQ), Louis-André Bertrand, affirmed that “Wednesday, the afternoon peak is our biggest peak of the week, followed closely by that of Thursday afternoon. midday “. In recent days, experts have also called for caution in The Pressexplaining that the effect of congestion may take time to appear.

In the morning, however, the traffic was more fluid. It took less than 20 minutes to cross the 22 kilometers separating Beloeil and the island, via the La Fontaine tunnel. It was however heavier in reverse at the same time.

Motorists trying to leave the island then took a little over 30 minutes to travel the five kilometers between the Anjou interchange and the entrance to the tunnel. By car, The Press took 22 minutes to cross the tunnel to the South Shore from Montreal, but only when approaching Souligny Avenue.

“It’s nothing exceptional yet, even though it’s rather similar to the last two days,” Ms.me Bensadoun. However, it recognizes that “extended journey times” have been observed on the A25 South, in particular, in east and west directions. “We also noted a little more traffic on the side of the Jacques-Cartier bridge compared to normal,” she said.

Brief portrait on the rest of the island

Like the day before, traffic remained heavy in the rest of the island of Montreal. As usual, Highway 40 was completely paralyzed westbound for the 17 kilometers separating the Anjou interchange and the Décarie highway.

Autoroute 15 itself was congested northbound, from the Samuel-De Champlain bridge exit to the A40. In the north of the island, highways 13 and 15 were also well congested in a southerly direction to access Montreal.

It should be noted that accidents involving several vehicles occurred at the start of the day on the Turcot interchange and Highway 40, eastbound at the height of the Charles-De Gaulle bridge, forcing in both cases the retrenchment of a lane to tow damaged automobiles, and thus certain slowdowns. The Sûreté du Québec (SQ), however, did not report any major incident in the region.