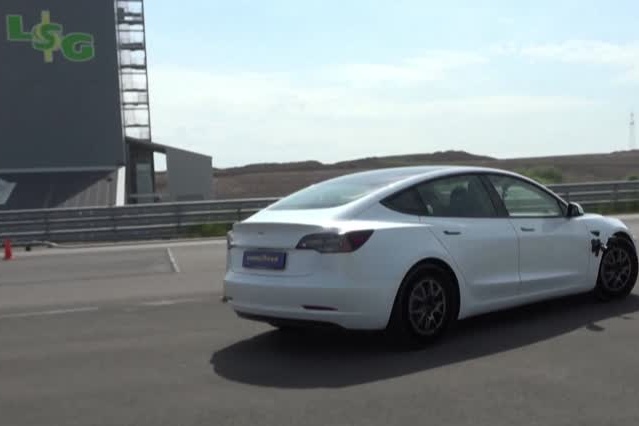 (Colmar-Berg) Indestructible and maintenance-free, airless tires could soon be fitted to commercial vehicles before revolutionizing cars, according to the promises of Goodyear, Michelin or Bridgestone.

On the Goodyear test circuit in Luxembourg, a Tesla fitted with airless tires was put through its paces by journalists on Tuesday.

This thin layer of rubber stuck on black spokes must achieve a physical feat: drive for thousands of kilometers by distributing the masses of a car as efficiently as compressed air.

The technical bet is almost met: the rubber and plastic frame does not collapse in the tight curves of the racing circuit, and the powerful electric car rolls smoothly. But it slides more than with conventional tires, and howls a lot more while driving.

These tires have been tested for 120,000 kilometres, up to 160 km/h, in both heat and snow, without major damage, assures near the track Michael Rachita, project manager for “non-pneumatic tires” at Goodyear . A second generation, “lighter, designed to offer less rolling resistance and less noise”, is being designed.

The first manufacturer to reinvent the wheel could strike a blow: these tires would face the most bumpy roads, without having their pressure checked. We could use a single structure over the lifetime of a car, recycle it, and save material by “retreading” a thinner layer of rubber, as is already done on heavy goods vehicles.

Michelin has established itself as a precursor with the “Tweel”, an airless model fitted to industrial mowers and machinery used on demolition sites. But the demands of a road car (high-speed resistance, longevity, comfort, silence, cost) seemed insurmountable.

The French equipment manufacturer has designed a model with the American car manufacturer General Motors, the “Uptis”, which it has tested at 200 km/h and shown at car shows.

The Bibendum promises “announcements” from the end of 2022 for car fleets. Its teams are working in particular on a cocktail of fiberglass and resin which must stick the rubber to the honeycomb structure of the new tire.

“We will continue for several decades to have tires that envelop air”, however estimated the CEO of Michelin, Florent Menegaux.

Goodyear, which applied for the first patent on this technology in 1982, has since put its foot on the accelerator.

The Ohio manufacturer promises a “completely durable and maintenance-free” tire for 2030, counting in particular on the development of autonomous vehicles. A version already equips shuttles as well as small delivery robots on university campuses.

Bridgestone is also aiming for commercialization “over the next five to ten years”, after tests on fleets of utilities. According to the Japanese manufacturer, this solution will allow them to “minimize lost time” due to “tyre-related incidents”.

Other manufacturers remain skeptical. “The airless tire poses problems in terms of suspension and noise. It’s not a viable solution and I don’t expect it to become one,” said Continental manager Gerrit Bolz at a tire conference in 2017.

“Sooner or later, airless tires will take over,” assures researcher Ulf Sandberg, from the Swedish Transport Research Institute, who is preparing his own concept for trucks, with European funding. “In particular, they could improve rolling resistance and increase the range of electric vehicles, which is very valuable for manufacturers. »

If the race for “airless” is not unbridled, it is also because the creation of puncture-proof tires will force manufacturers to transform their factories, as well as their business model, according to Mr. Sandberg.

“Airless tires are part of our thinking about our business model, and our manufacturing processes,” said Xavier Fraipont, Goodyear’s Vice President for Product Development for Europe (EMEA). Like Michelin, the manufacturer is considering tire subscription models, billed on delivery or per kilometre.