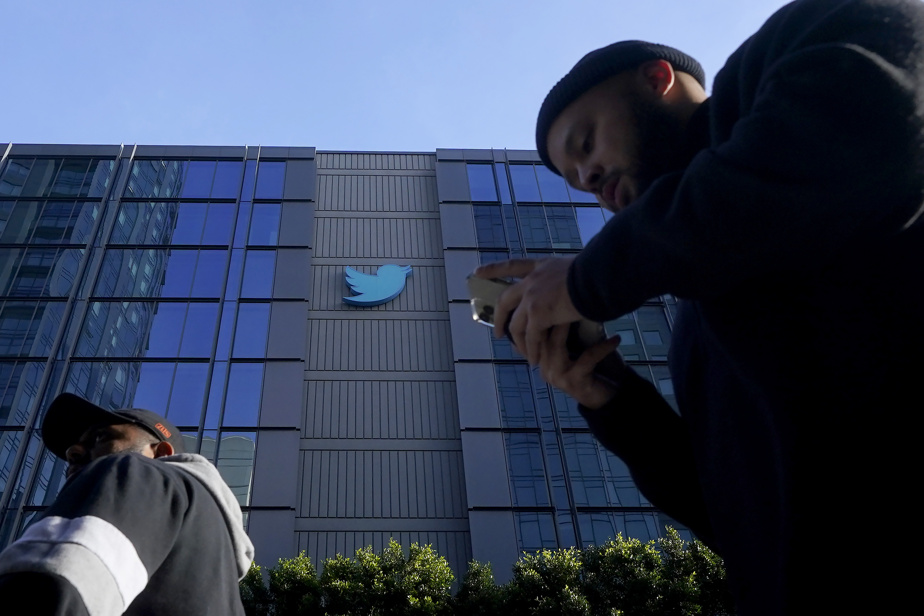 (San Francisco) At Twitter, the first week under the leadership of Elon Musk was like a tornado: started with sleepless nights for some engineers, it ended with the dismissal of half the staff.

“It was a very strange week. Executives were fired, others resigned, but there was no official communication from management until Thursday evening, ”says a former employee, on condition of anonymity.

The employees received a first email informing them that they would be fixed on their fate on Friday. The next day, the second confirmed the rumours: 50% of the workforce are thanked.

On the front line, the marketing and design departments, and the managers. Content moderation was more spared, with a dismissal rate of only 15%, according to Yoel Roth, the site’s security manager.

After 24 hours of silence on the subject, Elon Musk ended up tweeting that there was “unfortunately no other choice when the company is losing more than four million dollars a day” and that “everyone who has lost their jobs were offered three months of compensation”.

The decision did not surprise the employees – the rumors were insistent – ​​but the brutality of the method shocked.

“You discover that you have been disconnected. Your laptop is automatically reset,” said Emmanuel Cornet, a French engineer who had been at Twitter for a year and a half, on Friday.

He was sacked on Tuesday for “professional misconduct”, without further explanation, after a weekend spent entirely in the office working on projects launched manu militari by the new boss.

He was, however, one of the 5 to 10% of the best engineers in the company, according to the lists drawn up this week.

The boss of Tesla has indeed brought in engineers from his flagship electric automobile to evaluate the work of Twitter developers, examining in particular the volume of code produced by each, a “naive” measure of productivity according to Emmanuel Cornet.

The latter is one of five former Twitter employees who have filed a class action lawsuit against the company on the grounds that they had not received the 60-day notice period required by American law in the event of a social plan (Warn act).

The French expat was considering leaving anyway. “But many of my colleagues are in a less enviable position in terms of health insurance or visas,” he recalls. “Some were on parental leave. A colleague gave birth yesterday, before being fired today. »

Terminated persons must continue to abide by company rules during the notice period.

Many fear that the new management is looking for excuses to accuse them of professional misconduct and not pay them compensation.

“They will watch if someone denigrates Twitter in public or look for compromising internal messages,” said a former employee on condition of anonymity.

As for people still employed, but teleworking, “we will ask them to come back to the office and if they refuse, hop, professional misconduct”, he predicts. “They try to save money at all costs, to the point of treating people quite inhumanely. »

“Sorry to those who weren’t fired”

The richest man in the world is preceded by his reputation, from the hellish speeds in his factories to his rejection of telecommuting, very popular in tech, and his absolutist vision of freedom of expression, synonymous with disinformation and speech hateful for his detractors.

This summer, more than 700 people left on their own, even before knowing if the $44 billion acquisition was going to take place.

The radical change in corporate culture was confirmed last Friday, when teams of engineers were mobilized to overhaul certain features in a very short time, with their position at stake.

“There were probably too many managers… Twitter was not an efficient and well-oiled machine”, underlines the anonymous ex-employee. “But I don’t know if [les licenciements massifs] are going to fix the business. »

This weekend, current and former employees were discussing in online groups their future, but also the fact that several laid-off people reported being called back the next day when management realized it needed them.

“I feel sorry for everyone who wasn’t fired, to be honest. Elon will use them to the bone with his wacky ideas, ”reacted James Glynn, a former content moderation team manager from London. “Any version of Twitter we knew before is dead. »