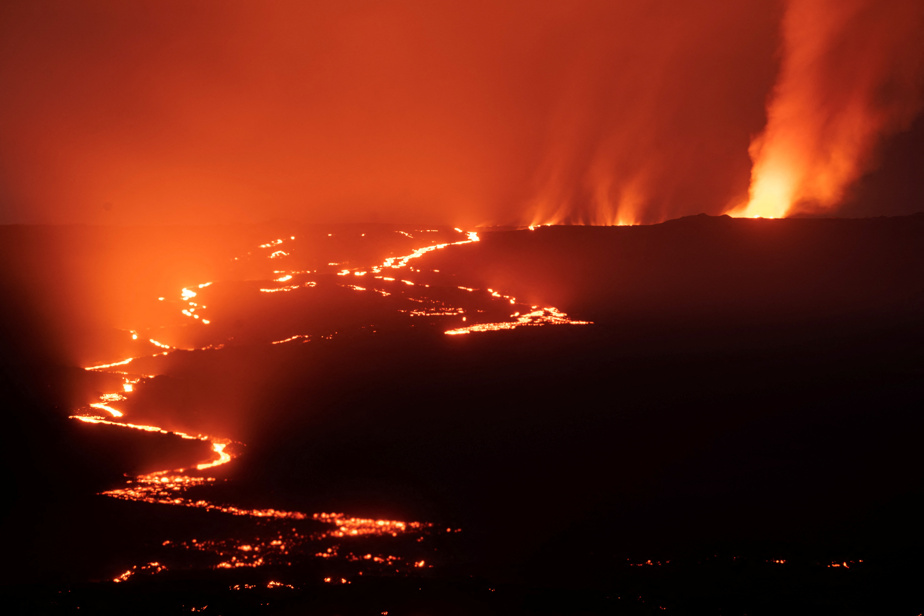 (Los Angeles) The authorities of Hawaii have mobilized national guards to manage the consequences of the eruption of Mauna Loa, the largest active volcano in the world, whose lava flow is slowly threatening a road axis.

Twenty National Guard reservists from the U.S. State of the Pacific have been activated “to assist Hawaii County with highway traffic management and other duties related to the Mauna Loa eruption,” the official tweeted on Monday. island emergency management agency.

Erupted on November 27, the volcano on the largest island of the archipelago continues to spit lava on its northern slope, without posing any danger for the moment for dwellings.

But the authorities are concerned about the most active lava flow, which is advancing at a rate of some 6 meters per hour towards a major road, the “Saddle road”, the possible cut of which would force the inhabitants to long detours.

The lava front is now located 3.5 kilometers from the road, noted Monday the bulletin of the American Institute of Geophysics (USGS), but the conditions “make it difficult to estimate if and when the lava flow will touch” the road.

The USGS also specifies that sulfur dioxide emissions are rather down but remain significant enough “to have a moderate to significant impact on air quality at the regional level”, depending on the wind in particular.

Mauna Loa, so wide it covers half of the island of Hawaii, had not erupted since 1984. It then spewed lava for 22 days, producing lava flows that failed to only seven kilometers from the city of Hilo, located northeast of the volcano.

With a peak of 4169 meters, it is one of six active volcanoes in the Hawaiian archipelago and has experienced 33 eruptions since 1843. The main island of the archipelago is also home to a slightly higher volcano, Mauna Kea -4207 meters above sea level.

Just southeast of Mauna Loa, the Kilauea volcano is experiencing very sustained activity, with almost uninterrupted eruptions between 1983 and 2019. Its latest, minor, has been underway for several months.