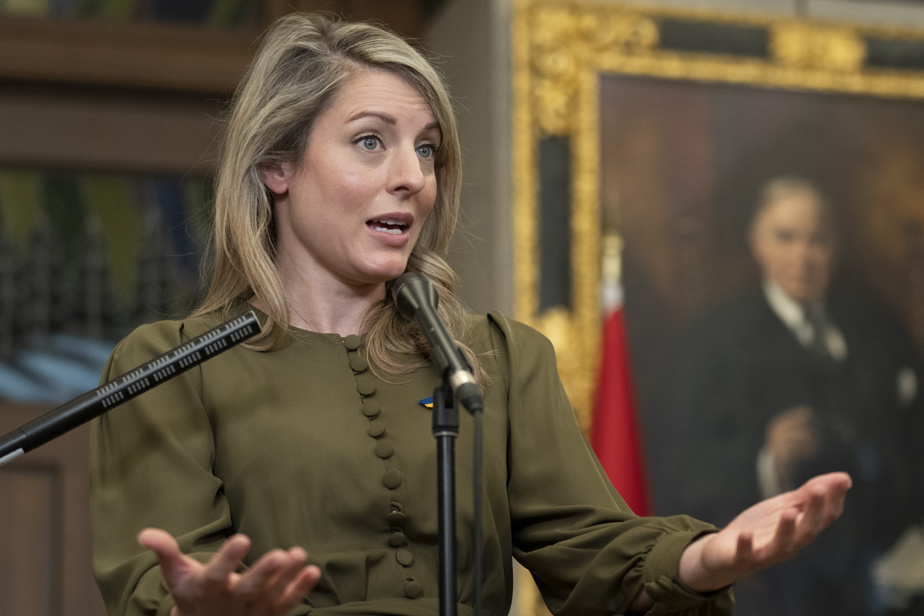 (OTTAWA) Canada and China may be at odds on many issues, but Beijing’s buy-in is ultimately essential on one key issue: helping to end the war in Ukraine, the minister said Tuesday. Foreign Affairs.

Mélanie Joly told The Canadian Press that she delivered this message in a telephone interview last week with her Chinese counterpart, Wang Yi, before heading to Southeast Asia this week for a trip to one overarching goal: to deliver Canada’s “Indo-Pacific Strategy” long promised by the Liberal government.

The label “Indo-Pacific” serves as diplomatic shorthand for policies and approaches across the vast Asia-Pacific region that seek to exclude China, in an attempt to confront its massive influence across the region.

The official visit of Mr.me Joly in Indonesia and Vietnam also comes as Western countries, especially the United States, are leaning on China to be more lukewarm in the face of Vladimir Putin’s troops invading Ukraine. .

“We believe China has an opportunity to ensure that it plays a constructive role in ending the war,” Mr.me Joly in an interview from Indonesia this week, before leaving for Vietnam.

This was the first meeting between the foreign ministers of Canada and China since the release in September of Michael Kovrig and Michael Spavor. The two Canadians had been detained in China for nearly three years in a case that had significantly clouded Sino-Canadian relations.

The pair were arrested in what was seen as retaliation by Beijing for Canada’s arrest of Chinese chief financial officer Meng Wanzhou on a US extradition warrant in 2018 in Vancouver.

The case was not resolved until the US Department of Justice withdrew its extradition request, setting the stage for what essentially became a prisoner exchange.

A record of the call, released by the Chinese Embassy, ​​states that it was Mr.me Joly who originated the call. The statement shows that China still harbors grudges over Canada’s role in the arrest and attempted extradition of the Huawei director. The minutes also indicate little movement on the Ukraine issue.

“The essence of this case is that the United States suppressed Chinese high-tech companies through coercion. Such despicable behavior is clearly seen by the world,” the Chinese statement said. “Wang Yi said that no country should encourage this one-sided intimidation. »

Regarding Ukraine, Minister Wang told Mr.me Joly that China wanted the world to “think calmly and rationally” and work towards a ceasefire and peace. “By upholding an objective and unbiased stance, China will continue to play a constructive role in this regard,” the statement from the Chinese Embassy said.

Diversify its links with the region

The United States wants Canada to follow through on a tougher China policy, and in his mandate letter in December, Prime Minister Justin Trudeau instructed Mr.me Joly to suggest a way forward. Although China is not mentioned by name, the letter asks Mr.me Joly to “develop and implement a new comprehensive Indo-Pacific Strategy to strengthen diplomatic, economic and defense partnerships, as well as international assistance in the region”.

In recent months, Canada has already taken steps to diversify its trade options in Asia and the Indo-Pacific region, opening talks with India, the ASEAN bloc of nations – which includes Indonesia and Vietnam – and Taiwan, which China considers a breakaway province.

Canada ostensibly announced the start of trade talks with Taiwan following the release of Messrs. Kovrig and Spavor, which angered Beijing.

Mme Joly said her discussion with her counterpart Wang was “respectful” and “frank”, but she made it clear that she had discussed Taiwan and the rights situation of ethnic Uyghur Muslims in China’s Xinjiang province. China faces allegations of mass arbitrary detention, repressive surveillance measures, forced labor and sterilization of Uyghurs. China denies these accusations.

China is one of 35 countries that abstained in March in the vote at the United Nations General Assembly condemning Russia for its aggression against Ukraine. Canada and its Western allies were among 141 countries that voted in favor of the resolution. Indonesia voted in favor, despite China’s strong regional influence, but Vietnam abstained.

Mme Joly said part of his mission to the region this week was to reinforce the need to condemn Russian aggression. She has seen a very direct impact of this war on the daily lives of Indonesians – the price of cooking oil, a staple in food preparation, has risen dramatically in this country.