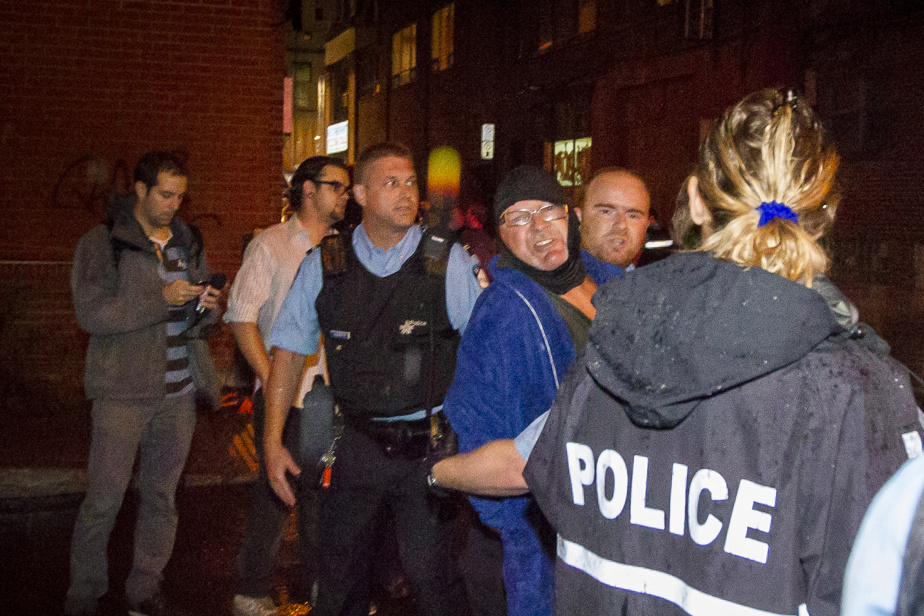 Montreal police focused on Liberal Party security on election night in 2012, because a victory for Pauline Marois was supposed to be a “festive and joyful” event for students, according to an SPVM official. But for lack of police, a citizen who saw Richard Henry Bain before the Metropolis attack failed to report his “strange” behavior.

“I found it particular as driving. The person had a look that seemed special to me. He was in a dressing gown and [portait] a kind of tuque. He had a strange look, “said Stéphane L’Écuyer on Wednesday, in an unpublished account, at the civil lawsuit brought by survivors of the attack against the Service de police de la Ville de Montréal (SPVM) and the Sûreté du Québec. These four stage technicians are claiming $600,000 from the police because of poor security on the evening of the events.

Thirty minutes before the attack, on September 4, 2012, Stéphane L’Écuyer was walking towards the Métropolis. Not far from the theater, he saw a vehicle that was driving “slowly on two lanes”. His conduct was “particular”, according to the witness. The driver “matched the description of Mr. Bain very much,” he explained in cross-examination.

Stéphane L’Écuyer wanted to tell the police about it, but to his great surprise, he didn’t see any near the Metropolis, rue Sainte-Catherine.

I found it surprising and special, in a context like this. I saw no security, really no security.

“It’s strange, it’s as if anyone could arrive like that, nearby, or at the back of the building,” he testified.

A few minutes later, Richard Henry Bain, wearing a dressing gown and a balaclava, opened fire on a dozen stage technicians gathered near the back door of the Metropolis. Denis Blanchette died instantly and Dave Courage was seriously injured by the single bullet fired. The killer’s rifle luckily jammed, which probably averted carnage. “The English are waking up,” shouted the assassin during his arrest.

Richard Henry Bain is serving a life sentence without the possibility of parole for 20 years.

An SPVM executive, Commander Joanne Matte, testified on Wednesday afternoon about the underside of the Montreal police intervention on election night. Joanne Matte was at the SPVM command post at Émilie-Gamelin Park that evening.

The policewoman repeated it several times: it was the Liberal Party of Quebec (PLQ) that was in danger on election night. “If the PLQ was re-elected, that was the danger. For us, the threat was really, really related to the PLQ. The Liberal Party, Mr. Jean Charest, who was not unanimous,” she explained. The Liberals had been targeted for months by students as part of the maple spring.

Thus, the rally of the Parti Québécois in the Metropolis did not at all constitute a “threat” in the eyes of the SPVM, quite the contrary. “If Pauline Marois was elected, it was festive, it was joyful, the students were happy,” explained the policewoman.

The SPVM therefore mainly focused its efforts on the three “demonstrations” scheduled for 6 p.m., 8 p.m. and 9:30 p.m. in Émilie-Gamelin Park, which was the gathering point for the student demonstrations in the spring of 2012.

However, there were no crowds at these gatherings. “It was relatively calm. It was easily controllable,” Joanne Matte agreed.

Even after the announcement of the Parti Québécois election, the SPVM did not deploy its personnel to provide additional protection around the Metropolis. All evening, however, the patrollers had to provide “special attention” to this event, she said.

This Thursday, the authors of an “executive report” prepared in January 2013 by the Sûreté du Québec (SQ) to take stock of the Metropolis attack – and never disclosed – will be called to the bar. Judge Philippe Bélanger agreed with media lawyers by allowing the content to be reported. The Attorney General of Quebec also failed to obtain a closed session on many elements relating to security measures during the attack.

“The Court considers that the disclosure here is of particular importance for the public, which is entitled to make an informed critical judgment regarding the protection and security measures deployed by the SQ and the SPVM on September 4, 2012,” said concluded the judge on Wednesday.