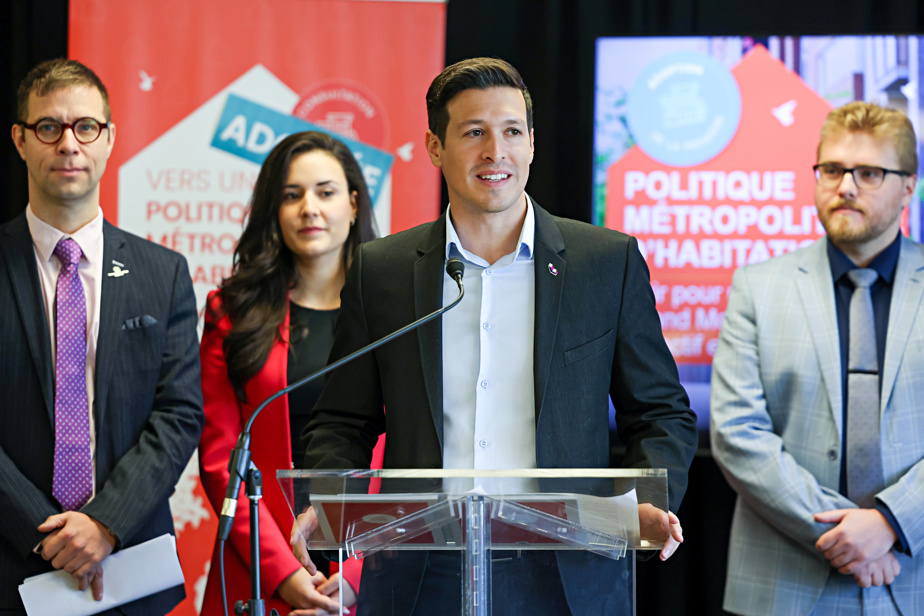 In an attempt to curb the housing crisis, the Montreal Metropolitan Community (CMM) is setting ambitious goals in its first housing policy unveiled Thursday, but many of the actions it must take depend on the collaboration and funding that will come from the Quebec government.

“It is urgent to act”, launched Stéphane Boyer, mayor of Laval and vice-president of the council of the CMM, at a press conference. “We must find solutions to reduce citizens’ housing bills. »

In the document of more than 80 pages, the CMM highlights the extent to which the current crisis affects all segments of the population, especially low-income households, in the 82 municipalities of its territory.

“Since 2011, the selling price of housing in Greater Montreal has increased by 90%, while household income has only increased by about 40%. With respect to rents, the rates of increase over the past three years are the largest seen in nearly 20 years,” the document notes.

We also see that a third of tenants (200,000 households) devote more than 30% of their income to housing costs, which is considered unaffordable.

Among the objectives set by the metropolitan housing policy is to reduce by a quarter, by 2031, the number of households in core housing need – those who occupy housing that is inadequate, unaffordable or of an unsuitable size. . In 2021, there were 132,000 households in this situation on the territory of the CMM.

Another goal: to increase the pace of housing starts to more than 35,000 units per year, whereas only 25,000 units have been built on average annually over the past five years. However, 55,000 housing starts would be needed per year to ensure housing affordability, recognizes the CMM.

We also intend to restore a vacancy rate of 3% in the rental market, ie a balanced rate, whereas this rate is less than 1% in several sectors of Greater Montreal, in particular the North and South Shores.

To achieve this, the housing policy presents 26 actions to be undertaken, in particular the implementation of a support program for the smallest municipalities, to help them find strategies to densify their territory and increase social diversity.

Municipalities can also act by requalifying different spaces for housing and by favoring non-profit organizations, cooperatives or trusts that want to develop the housing stock.

But above all, we emphasize that we must make representations to Quebec so that it increases funding for social housing.

“The message we are sending is that Quebec has a responsibility to move, there is a lot of pressure. The cities are ready to move, but we need funding from Quebec,” says Guillaume Tremblay, Mayor of Mascouche and Chairman of the Housing and Social Cohesion Commission.

“We don’t just want to build housing, we want to create living environments that will be mixed, inclusive, where public transit will play an important role and that will promote a way of life on our territory that is part of the sustainable development,” says Stéphane Boyer.

According to the Collectif de recherche et d’action sur l’habitat (CRACH), however, the CMM’s plan misses its mark and is too timid to have any real effect on the housing crisis. The group’s spokesman, Martin Blanchard, believes that the housing policy should have required more social housing.

While the real estate market is prey to a speculative madness, “the CMM lets this speculative market define what affordable housing is”, he denounces.

He also deplores the fact that solutions that fall under municipal powers have not been adopted, such as the regulation of Airbnb, the establishment of a rent register to control increases, tighter monitoring of building permits which can be used to renovicions and better enforcement of sanitation regulations.