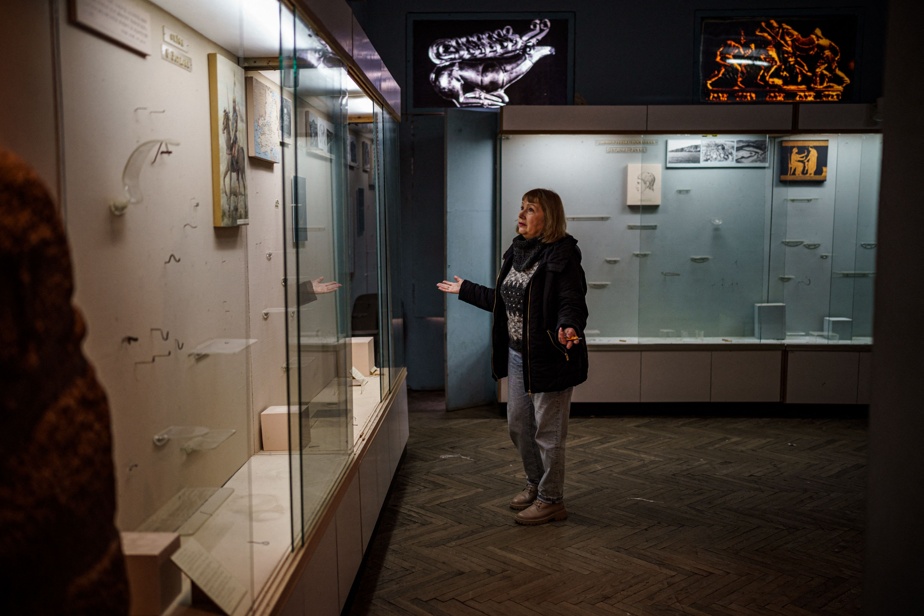 (Kherson) “Everything was broken and destroyed”: at the sight of shattered display cases and desperately empty shelves, Olga Goncharova, head of a museum in Kherson, a city in southern Ukraine recently retaken from the Russians, felt ” like a stab in the heart.

After more than eight months of Russian occupation, she discovered, appalled, the state in which the occupants left these places that she has been surveying since 1978.

Devoted to local history, the Kherson Regional Museum housed around 180,000 objects in its collections before the Russian invasion launched at the end of February.

“Everything that had material value, they stole it or took it in an unknown direction”, lambastes the acting director of the Museum to AFP, during a visit to this establishment.

“All the photos, the documents, all the things that were there…everything was familiar to me,” she explains. “It’s my second or maybe my first home.”

But the state of desolation she discovers on her return leaves her speechless.

“It was incomparable emotions. Like a stab in the heart,” she laments. “It was a terrible shock.”

Since the forced withdrawal of the Russians from Kherson, driven out by the Ukrainian army during a counter-offensive, Olga has been trying to keep track of the damage and thefts.

“I realized at that time directly, seeing these acts of vandalism, that the ‘great Russian culture’ they speak of does not exist”, she denounces, wondering how the Russian soldiers could have been “so cruel to the museum”.

The Kherson Regional Museum is one of four cultural establishments in the city to have been extensively looted during the occupation, the NGO Human Rights Watch (HRW) denounced in a statement on Tuesday, citing “war crimes”.

“The people of Kherson have already suffered months of torture and other abuses during the Russian occupation, and then saw their cultural and historical heritage being packed up and taken away,” said Belkis Wille, deputy director of the department. “Crises and Conflicts” from HRW.

“The Ukrainian people have the right to return all stolen items and to justice,” she added.

Mme Goncharova had personally taken care of preserving many of them. “All the exhibited works had passed through my hands,” she recalls.

In recent days, his job has changed dramatically. It lists what was stolen. Gold objects, rare coins, weapons, military medals, the list is long.

According to Ukrainian media, the Russians transferred some missing objects from this establishment and the Kherson Regional Museum of Fine Arts to museums in Crimea, a Ukrainian peninsula annexed by Moscow in 2014.

The predecessor of M.me Gontcharova at the head of the museum, Tetiana Bratchenko, is suspected by the Ukrainian prosecutor’s office of having collaborated with the occupants. She is said to have fled to Russia as the Ukrainian army took over the city.

According to a museum security employee, quoted by HRW, Russians in civilian clothes have occupied the museum “many times”, including to celebrate Russian National Flag Day in August.

HRW even reports that in October, a group of around 70 people went to the museum, then guarded by the Russian army, to pick up items and take them to three different trucks.

According to the international NGO, “at least 450 objects” have disappeared in total, including precious “Scythian gold, Russian imperial medals and coins”, but also paintings, furniture or even military uniforms dating from the Soviet era.

A local treasure, inherited from hundreds of years of history, according to the adventures of the country.

“It is a barbaric act. They used a crowbar, ”she says, annoyed. “Everything was broken and destroyed”.