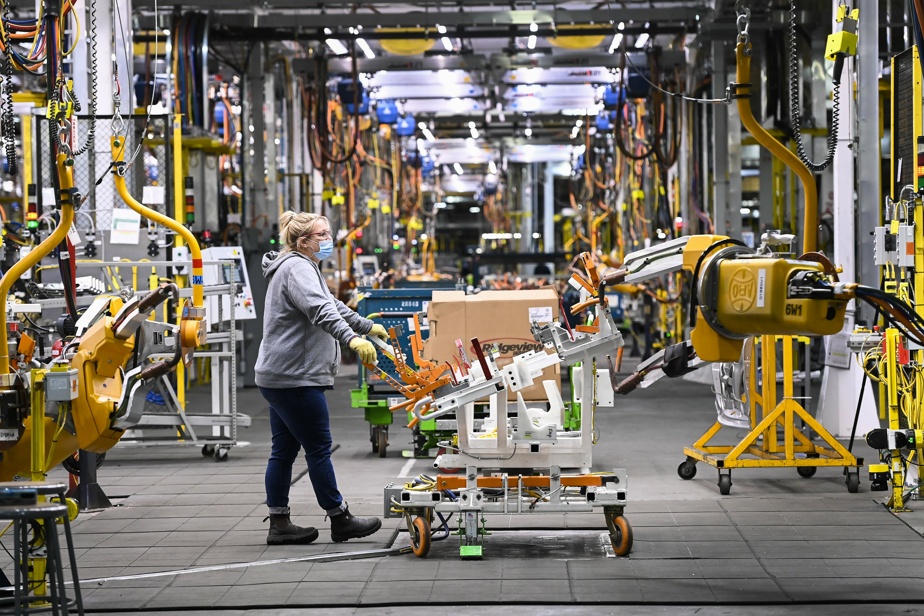 (Oshawa) The huge gray building that is GM’s assembly plant in Oshawa, Ont., looks like it did when the company shut down production on a freezing December day in 2019, but much of what’s inside is surprisingly new.

There’s a new product — since the November restart, the factory has been making huge (and hugely profitable) Chevy Silverado pickup trucks — new, state-of-the-art robots to move them around the factory, and miles of new lines of conveyors.

Perhaps the biggest change is the workforce that works there. These people, for the most part, are not just newcomers to the plant, but also new professionals in the manufacturing sector as the automaker has made a concerted effort to hire women for about half of the 1,200 positions on the production line.

“I didn’t even know how to use a hammer until I came here,” says Adriana Wilkinson, who is now production team leader in the body shop.

Like many new hires, M’s previous jobme Wilkinson – she ran an escape room – has been unsettled by the pandemic. She says she then jumped at the “life-changing opportunity” for herself and her family when GM started hiring last year. Now she says she will stay there for life.

“I never thought I would work with vehicles,” she adds. I never knew how to use a tool. I was totally out of my comfort zone, but I jumped in with both feet and I love it. »

His colleagues include the likes of Heather MacLeod, who is embarking on a new career after retiring from the RCMP; Honey Panchal, a control systems engineer who moved to Canada from India last year; and Crystal Cooper, who went from customer service at GM to group leader on the final assembly line because she wanted to get out of her element.

“Entering the world of manufacturing was a completely different experience, but it was tough, and I really wanted to be part of something bigger,” says M.me Cooper.

Gender parity on the production line is a big shift for an industry as women make up only about 23% of auto assembly jobs in Canada, according to the Future of the Workforce Initiative work of the Canadian automotive industry.

GM Canada President Scott Bell says diversity has been a priority for some time for the company, which is led by Mary Barra and has an equal board. It was the restarting of the factory that provided the opportunity to promote gender balance among its workers. “We just recognized the fact that we have a unique opportunity. »

To encourage more women to apply, GM highlighted testimonials from women who had previously worked there as part of its recruiting campaign, and made sure to advertise targeted to social networks.

The employer did not have to worry about getting enough responses with a total of 13,000 applications from across Canada and abroad for approximately 1,800 positions to be filled.

The opportunity to hire new employees, however, came after many early retirements, layoffs and disruptions for those who thought production would never return. “I’m not happy that GM closed our plant,” laments Rebecca Keetch, who is back at work after choosing to wait until operations resume.

She said she is glad production is resuming, but she feels the rapid closure and reopening was disrespectful to workers and the community. The closure led to the loss of higher-paying management positions. People working at contractors have also been affected without the same support as GM workers.

Mme Keetch is active in a group that lobbies for electric vehicle production to take place in Oshawa. She is disappointed that the plant has not obtained new commitments from GM in this regard. “I just don’t have a sense of long-term security until they decide to make Oshawa part of their autonomous, electric and connected vehicle future. »

Mr. Bell, of GM Canada, replied that the plant closure in 2019 was unfortunate, but part of a larger restructuring. With better-than-expected pickup demand, GM spent $1.3 billion on its commitment to the Oshawa plant. These amounts will help fund the company’s transition to electric, he says.

“It’s a substantial investment. The trucks are going to be around for a long time, so we feel comfortable about that. From an electric vehicle perspective, you know, we have to fund that activity. »

The demand for pickup trucks has increased during the pandemic. So factories have been forced to resort to overtime to produce them, said Sam Fiorani, head of global vehicle forecasting at AutoForecast Solutions LLC.

Sam Fiorani, head of global vehicle forecasting at AutoForecast Solutions, believes it’s risky to bet on the plant’s future as its closure has been announced twice: in 2008 and again in 2018. , he also doesn’t see demand for pickup trucks diminishing, and Oshawa is the only GM plant that can produce both light and heavy-duty models. “This is the most promising long-term outlook for any US automaker plant in Canada. »

Many employees hope that will be the case. “I plan to be here for the next 30 years,” said Stephanie Waudby, 38, production line foreman on the finishing line.

Mme Waudby had her own cleaning business before the pandemic slowed things down and she got into manufacturing for the first time. She was no stranger to automotive manufacturing, as she is now a third-generation GM employee at the plant.

She said she was proud to carry on the family legacy and everyone was excited to be building trucks again in Oshawa. “It was really heartbreaking for a lot of people when the factory had to close, so just being able to bring production back to this area is amazing. »