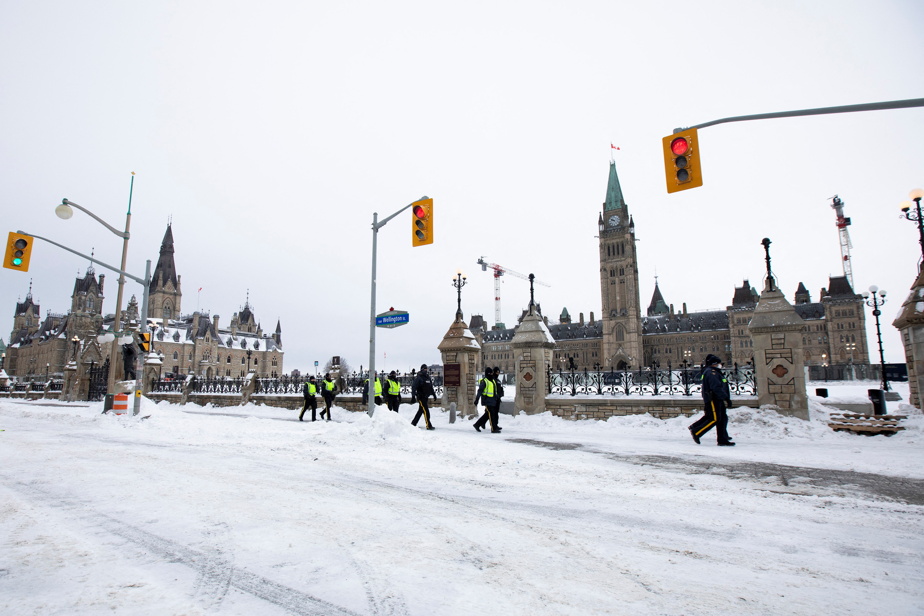 (OTTAWA) The protest that paralyzed the federal capital for three weeks is now prompting some officials to call for changes on Parliament Hill, including the permanent closure of Wellington Street to car traffic.

After being very caught up in the crisis in his city, Mayor Jim Watson said Wednesday that Ottawa must now consider changes to better protect central neighborhoods and Parliament Hill.

“Every time there has been a security breach on Parliament Hill, it has acted as a catalyst for change,” Watson said Wednesday during a city council meeting.

As the City discussed changes to Parliament Hill, police monitored groups of protesters who appear to have gathered in small towns east and west of Ottawa — in Arnprior and Vankleek Hill. .

The first change to Ottawa will be the temporary closure of Wellington Street to all vehicles except public transit, pedestrians and cyclists. This street, which runs directly along Parliament Hill, will remain closed until a new city council is elected and the city can develop a plan, with the federal government, to change security throughout the area.

“We don’t want, in the short or long term, another convoy to invade this very important space, which I consider to be the most important street in the country,” Mr Watson said.

Police cleared the protest from downtown Ottawa over the weekend after Prime Minister Justin Trudeau invoked the Emergencies Act last week. He finally revoked the use of this law on Wednesday afternoon, saying that order had been restored to the country and that the demonstration and other blockages were over.

The seat of political power in Canada is remarkably accessible to the general public, and is located near businesses and residential buildings. The lawn in front of Center Block is walkable to protesters and picnickers, and Wellington Street is a major thoroughfare in the federal capital.

Since the protesters were driven out of town, the “parliamentary precinct”, including Wellington Street, has been cordoned off and is accessible only to people who work in the area.

Catherine McKenney, who represents a downtown Ottawa district on city council, floated the idea of ​​asking the city to begin discussions to transfer ownership of this street — and its security — to the federal government.

Wellington Street borders Parliament Hill on one side and the Prime Minister’s Office, the National Press Theatre, the Library of Parliament and other buildings of national significance on the other. During the protest, “the entire responsibility was on the City to defend and protect Wellington Street,” Catherine McKenney said at the council meeting on Wednesday.

In a written statement, the Federal Minister of Public Services, Filomena Tassi, recalled that Wellington Street was indeed a municipal responsibility, but that the idea of ​​closing it to traffic had already been raised for a long time as part of a redevelopment. from Parliament Hill.

Similar changes were made in Washington to the section of Pennsylvania Avenue that passes the White House in 1995, when the Oklahoma City bombing alerted the United States to the perils of domestic terrorism. This closure became permanent following the attacks of September 11, 2001, although pedestrians can still wander down this street.

Ottawa’s city manager said Wednesday that the National Capital Region needs to start seeing itself differently from any other part of the country and that jurisdictional issues around security in the region need to be rethought.

“You end up with a lag in terms of how quickly different organizations need to respond,” Steve Kanellakos said at the board meeting on Wednesday.

Chaos after the 2014 attack

This is not the first time that these discrepancies have been a problem, recalled Mr. Kanellakos. Similar frustrations were felt when downtown Ottawa was sealed off in 2014 when a gunman wandered around the capital. He killed Corporal Nathan Cirillo, a Canadian soldier and reservist on ceremonial sentry at the National War Memorial, before entering the Parliament Buildings, where he was shot.

Mr. Kanellakos believes that the National Capital Region should have a permanent emergency plan, which would bring together the municipal, provincial and federal governments, and possibly the City of Gatineau, on the other side of the Ottawa River. .

There is a mechanism to bring all the key players together, but it’s not formal and isn’t set up to respond to major events, former Ottawa police chief Charles Bordeleau said in an interview. Wednesday.

The City of Ottawa estimates the anti-government protest cost it about $30 million. The municipal administration will now turn to the federal and provincial governments to cover these unexpected costs.