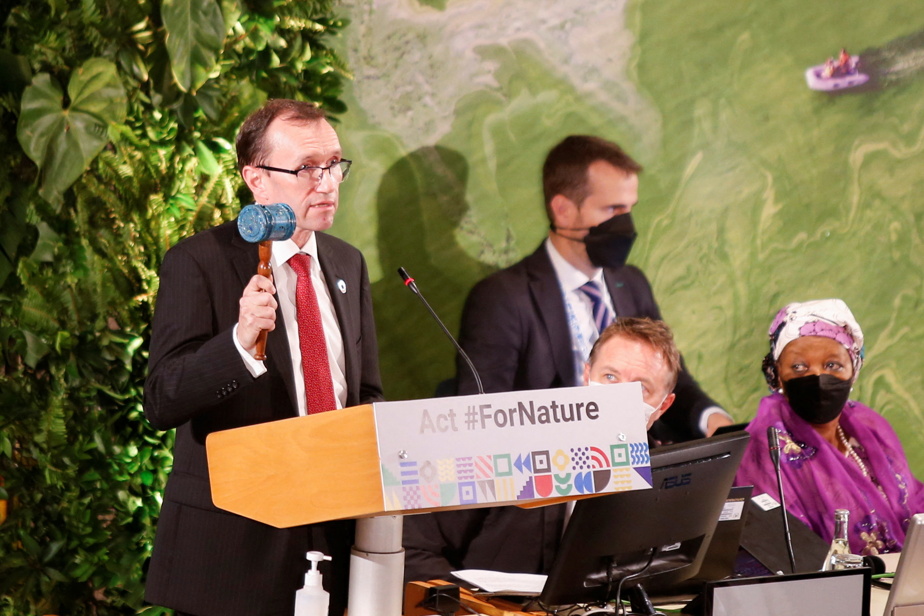 (Nairobi) The UN on Wednesday launched negotiations for a global treaty against plastic pollution, a “historic” decision to combat a scourge that threatens the environment and contributes to the collapse of biodiversity.

The United Nations Environment Assembly (UNEA), the highest international body on these subjects, meeting in the Kenyan capital Nairobi, adopted a motion creating an “Intergovernmental Negotiating Committee” responsible for drafting a text “legally binding” by 2024.

“I have no objections, it is so decided,” said Norwegian Environment Minister Espen Barth Eide, President-in-Office of the Assembly, marking the adoption with a hammer blow… recycled plastic.

“Today, we are writing history. You can be proud, ”he said to the applause of the standing delegates.

The hundreds of millions of tons of waste produced each year, which degrades into micro-plastics, are found in all the oceans of the globe, in the sea ice, in the stomachs of animals and even in the air taken from the summit. of mountains.

To address the scale of the problem, the mandate for negotiations is very broad, taking into account “the entire life cycle of plastic”, as environmental activists demanded.

It may thus relate to production as well as use, waste management, reuse or recycling.

It covers land and sea pollution caused by these products made from fossil hydrocarbons and responsible, according to the OECD, for nearly 3.5% of greenhouse gas emissions that cause global warming.

It may set objectives and define “binding” or “voluntary” measures. And provide national control plans, while taking into account the specific “circumstances” of the different countries.

The mandate includes developing oversight mechanisms and financing for poor countries and cooperating with the private sector in an industry worth billions.

“The message is that we will eliminate plastic pollution from our environment,” insisted Inger Andersen, executive director of the UN environment agency (UNEP).

But she acknowledged that the negotiations, which should begin in the second half of 2022 with the aim of concluding at the end of 2024, would come up against “thorny subjects”, such as the definition of “objectives”, “how to measure” compliance with them. or the “speed of implementation” of the new rules.

Defenders of the environment welcomed each other, while displaying their vigilance on the progress of the negotiations.

“We are at a turning point in history, where the ambitious decisions taken today can prevent plastic pollution from contributing to the collapse of our planet’s ecosystem”, commented Marco Lambertini, director general of the WWF, while emphasizing that “the job is far from done”.

Graham Forbes, Plastics Manager at Greenpeace USA, hailed a “great step forward” that “recognizes that the entire life cycle of plastic […] cause of contamination”. But the NGO also promises not to release the pressure “until a treaty is concluded and signed”.

The commitment displayed by large multinationals, including some major users of packaging such as Coca-Cola or Unilever, for a treaty setting common rules reinforces optimism, even if they have not decided on specific measures.

The association of European producers, Plastics Europe, hailed “a major step towards creating a waste-free future”. She welcomed that the resolution recognizes “the essential contributions of plastic applications” which must be made “circular and neutral for the climate”.

Some 460 million tons of plastics were produced in 2019 worldwide, generating 353 million tons of waste, of which less than 10% is currently recycled and 22% is abandoned in uncontrolled landfills, burned in the open air or dumped in the environment, according to the OECD.

Pollution that contributes to the collapse of biodiversity, yet essential to fight against the climate crisis, according to the latest IPCC report.