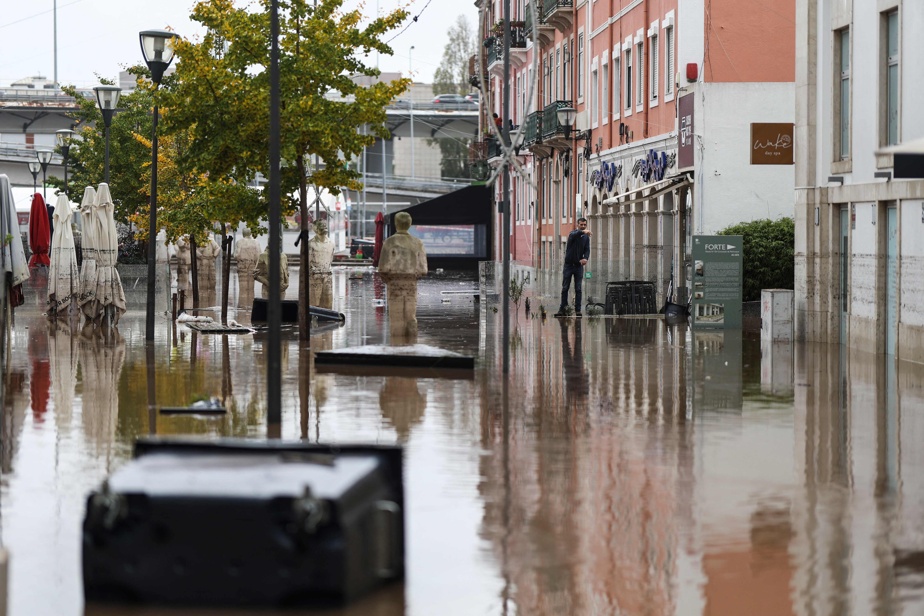 The town hall of the Portuguese capital issued a red alert and called on the population to “avoid travel”, while most access roads to the city center were cut or very difficult to use.

“There are submerged tunnels that we have had to close and this is causing a chaotic situation,” Lisbon Mayor Carlos Moedas told CNN Portugal television early in the morning.

Until noon, some 5,000 firefighters and rescuers carried out nearly 1,500 interventions due to numerous floods, falling trees or landslides, including more than 800 in the capital region, underlined the national commander of the civil protection service, André Fernandes, at a press conference.

The weather forecast calls for “heavy and persistent rain” until dawn on Wednesday, he warned.

Between Monday 9 a.m. and Tuesday 9 a.m., it rained “almost as much” as in “the whole month of December” usually, meteorologist Nuno Lopes, from the Portuguese Institute of the Sea and the atmosphere (IPMA).

“The place where it rained the most in the whole country was the city of Lisbon,” he said, noting that previous rainfall of a comparable intensity dated back to 2008.

Last week, the heavy rains that fell in the night from Wednesday to Thursday had already caused major flooding, causing great damage as well as the death of a woman, found drowned in a cellar in the district of Algés, located in the commune of Oeiras in the western suburbs of the capital.

On Tuesday, this area along the Tagus was still among the most affected. At the end of the morning, under a fine and uninterrupted rain, the center of Algés was still bathed, in places, in several tens of centimeters of water, making the railway station inaccessible and forcing the closing of the streets to automobile traffic, observed by AFP journalists.

Dozens of municipal employees, equipped with squeegees and buckets, tried to evacuate the water and mud from homes, businesses and roads, the manholes being saturated.

“The water rushed into my house”

“I saw the water level rise outside and suddenly, around 3:30 a.m., the water rushed into my house, taking everything in its path. I couldn’t do anything and I took refuge with my wife and my son on the first floor,” testified Gil Catonio, a 42-year-old Brazilian.

While the water level had already reached 90 cm at his home last week, damaging his household appliances, this time it reached 1.50 m in height, leaving a clearly visible mark on the walls.

The town hall of Oeiras recommended “all people to stay at home” and even decided to close schools due to disruptions in road traffic.

In the northern suburbs of Lisbon, the municipality of Loures was also very affected.

In neighboring Spain, several roads have been cut in the region of Extremadura, bordering Portugal, according to the authorities.